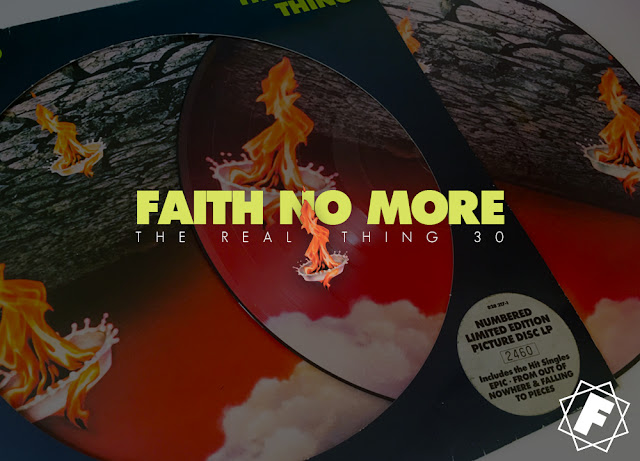 Faith No More's third studio album The Real Thing was released on June 20th 1989. The record may be revered thirty years later by critics and fans however initially it took over a year to achieve any success.
Slash Records learnt from previous errors with the release off Introduce Yourself and arranged a star studded launch party at the Roxy Theatre on Sunset Strip in Hollywood. Executives from the record company, MTV, Def Leppard, Slash and Duff from Guns 'n' Roses and Courtney Love were all in attendance.
Despite this illustrious introduction to the world's press few reviews were published therefore word of the new FNM album was not spread. Those who did write about The Real Thing issued positive analysis with some heralding FNM as the 'next big thing'.
Faith No More then took to the road in the USA and then the UK. In August the band released From Out Of Nowhere as their first single from the album and supported Metallica for a month on tour in the US. This did not do a great deal to sell records as the majority of crowd weren't ready to appreciate FNM's genre mixing.
In January 1990 the FNM released Epic as their second single which was accompanied by a promo video directed by Ralph Ziman. The song was picked up by radio stations and featured heavily on MTV earning the band a Grammy nomination. Coupled with a third tour of the UK, press coverage, TV spots and more aggressive promotional techniques (including endorsements from Metallica and Guns 'n' Roses) the album found huge success in the UK and Europe and eventually in the US. This led to headlining performances at major festivals and The Real Thing went platinum on September 26, 1990.
The Real Thing peeked in the Billboard 200 at #11 and #30 in the UK charts, Australia would also embrace the record and it reached #2 in the album charts.
By the end of 1990 The Real Thing was Kerrang! and RIP's number one album of the year and featured in Sounds album of year list.

The album has since become a classic, has been described as a seminal record, credited with inspiring a generation of new music and cited as a defining influence on many artists. The Real Thing has been voted by many publications as one of the greatest albums of all time.

Let’s move on to the new Faith No More album, finished but as yet untitled, though it’ll be in stores by March. The songs are quite brilliant, singer Mike Patton being an outstanding addition, and the power quota is disgustingly huge all the way, thick and rippling with punch. The guitars ride higher than on previous vinyl and that’s a damn fine thing.

Hell,  Faith No More have done it again and produced a fully-fledged rock pigeon which refuses to be put in a hole.  Effectively mixing disparate styles, 'The Real Thing' alternately gets your foot  tapping, head nodding and backbone shivering.
The diverse and unconventional - in rock - rhythms of drummer Mike Bordin and funky bass of Bill Gould are expertly blended with the crunchy rock guitar of Jim Martín.
As such, this album follows in the footsteps of '88's 'Introduce Yourself but with an overall slicker and tighter sheen.
In Mike Patton they seem to have found a fitting vocalist, both musically and  personality- wise. I guess however much I miss Chuck Mosley's style and haircut, his voice did grate just a teeny bit now and then, and if the band are happier now so much the better.
Though whether the band's new-found professionalism is due to Chuck's departure and less 'inner conflicts' or just a natural progression I wouldn't  know.
As usual, expect the unexpected. From the rock-out of single 'From Out Of Nowhere' through 'Surprise! You're Dead' - a real tight Hardcore Metal Thrash with class - to quick-slow instrumental 'Woodpecker From Mars' they always keep you on your toes.
Then there s the hard-hitting rap/rock of 'Epic', and 'Zombie Eaters' which lulls you at the start as an acoustic love song with soaring keyboards (hi Derek!), but in true FNM or Metallica style jerks you to life with menace and aggression, it's around this point on the album that the 17 universes really do intersect for me. And don't forget the teasing build-ups and off-beat rhythms (again) on 'The Real Thing'.
My personal niggle with the FNM sound is the keyboards, courtesy Roddy Bottum, for instance on the title track and the bubbling 'Underwater Love', though that's not to say you won't love 'em - and it's certainly not enough for me to drop that last kerrlassic K. And
just as I get to thinking they've lost that raw edge, that urgency and roughness I loved about 'introduce Yourself, they kick back and shut me up.
Watch out for two extra tracks on the CD and cassette versions - a phenomenal cover of 'War Pigs' and a laid-back ambling swing with plonking piano and nasal 'Edge Of The World'.
It's the Real Thing and it takes some beating. 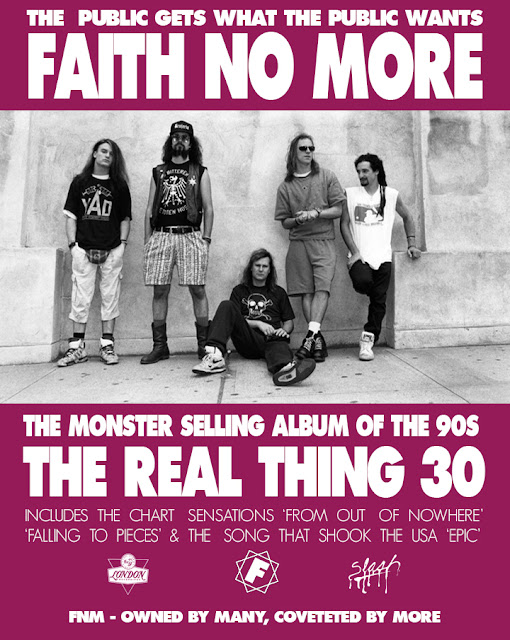 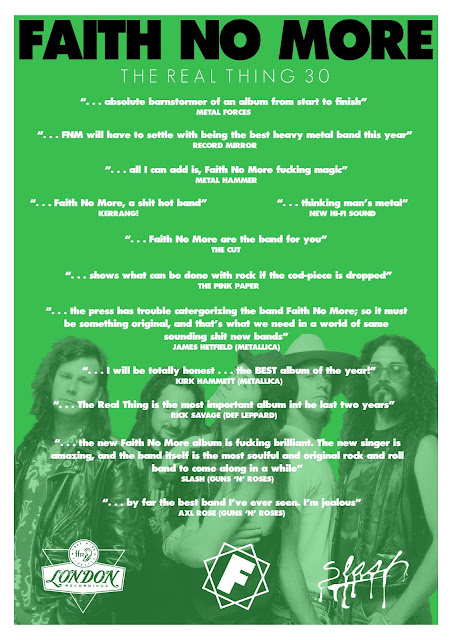 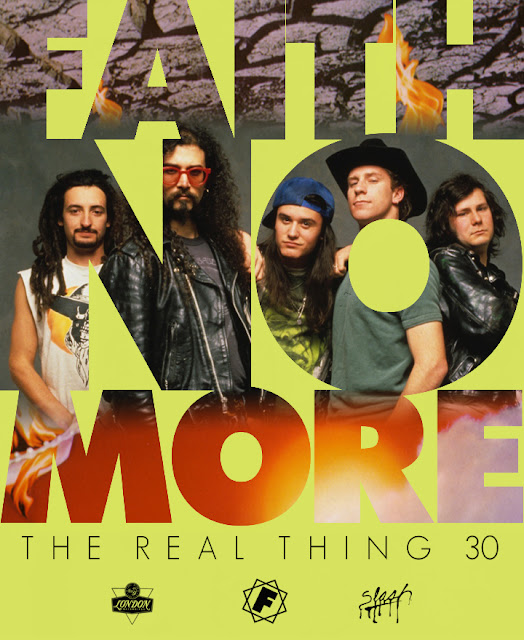 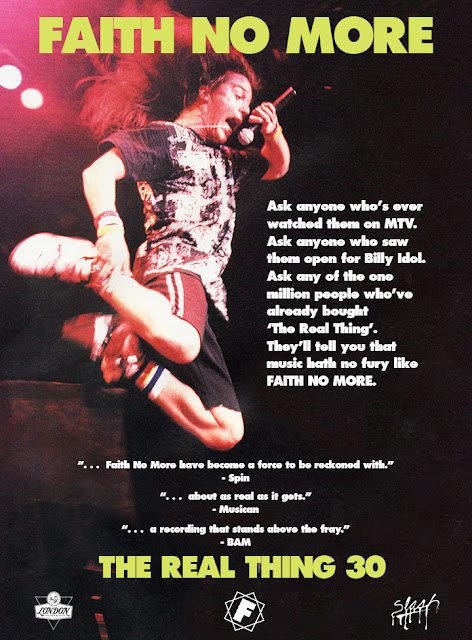 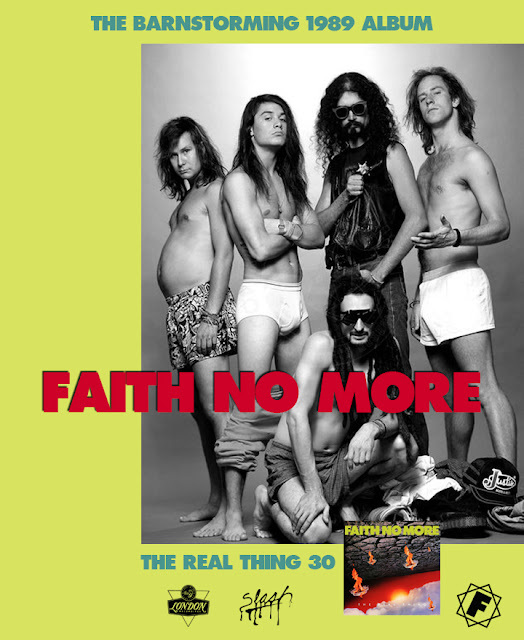