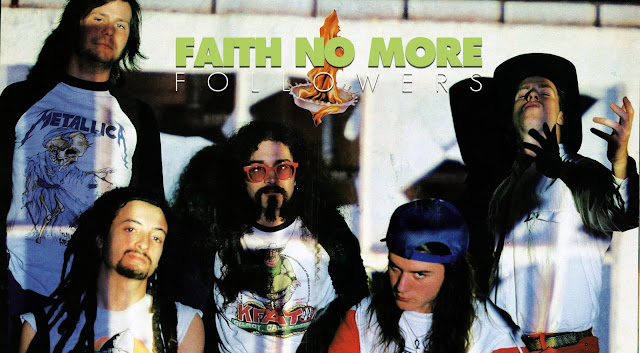 Deep in the American heartland, sicko speed metal sensationalists FAITH NO MORE are coming to terms with serious success the groupies, the glad-handers and the merely gonzoid. Does this threaten to topple even their own highly-developed sense of the depraved? GAVIN MARTIN takes a deep breath and joins FNM's tour bus for a frightening, lightning trip through the rank underbelly of MTV star-tripping.

Welcome to the warzone in Tucson, Arizona. Inside a club called Muddboggs, Faith No More are unleashing the full range of their mega-metal artillery and the caged-in crowd are responding appropriately.
The battle line has been drawn four rows from the front of lhe stage, where the slam dancers and would-be stage invaders come in range of the gleeful musde-bound bouncer blockade. Every time a flailing, hysteria!
youth is hoisted out of the trenches and pushed towards the front by his buddies, the bouncers respond with bear-like paws and shit-eating grins pushing, shoving and throwing the helpless ones back into the violent fray. This can be a dangerous business. Earlier this year at the Astoria in London, the Faith No More assault had barely started when the crowd broke through the stage barriers, delaying the show while new defences were built. Accidents are commonplace when the group played their hometown San Francisco earlier in the (cutely named) Fat Bastard Tour, one of these dance warriors crashed down so hard on top of one of singer Mike Patton's friends that he broke three ribs and lost his bowel control. Well, that's one way to clear the crowd.
The group don't actively incite the mob - but neither do they try to calm them down. They're waging a war of their own. Faith No More attack on all fronts, lacing their speedcore detonations with splinters of glistening melody, jolts of rapped urgency, dark brooding jazz ballads and atmospheric samples. They may be from the same broad musical church that produced Metallica and GnR but FNM do not have either the former's tunnel vision nor the latter's anti-musical rants.

The product of five distinctly different characters and eight years of fine tuning. Faith No
More's music is a futuristic challenge to both metal insiders and outsiders. With the introduction of new singer and lyricist Patton, their latest album 'The Real Thing' is a whirlpool of emotional reach, rancour and desperation studded with weird, tormented and lascinating imagery. Cover versions include Black Sabbath's 'War Pigs', Technotronic's 'Pump Up The Jam' and The Commodores' 'Easy'- afair indication of the boundaries broken by the band.
Already established in Britain and Europe, the group are starting to make an impression in the American heartland, with MTV playing their latest single 'Epic' on heavy rotation. But that alone can't explain the riotous assembly in Muddboggs. The manageress at our motel had told me it used to be a-place to hear good R&B but the last time she went, there was "some sort of satanic group, with people offering their children up onstage to be blessed or cursed or something." She was probably hallucinating: I imagine thatpeople who live in Tucson's 100 degree desert hreat all year round have their brains constantly at boiling point. I also imagine that the young folk living in a town like this one remote, few places to hang out (except the Mall and there are moves afoot to prevent under-age types from loitering there) - suffer from the sort of stifling boredom that only some visceral rock 'n' roll can obliterate. Sure, they can buy their drugs (Tucson is a major growth area for cocaine and marijuana), they can even buy their sex (a stream of topless bars and strip joints can be found just off the freeway), but these are consumerist, sedentary past times . In a place likeTucson the feverish abandon displayed by the Muddboggs crowd isn't Just understandable, it's probably a human necessity. I think that both Mike Patton whose lyrics are often about or invocations for some sort of extreme, primal release-and drummer Mike Bordin, schooled in African polyrhythms and a believer in the fundamental importance of music in society, would agree. Tonight Patton seems to spend histime on stage attempting self-immolation. He comes on like a clockwork monster wound up to breaking point, lunges forward, stamps his feet, hangs the microphone from the rafters, swings it between his legs, tears off his souvenir London bobbie's helmet and mimes a furious jacking-off dance. Breathless and unable to swallow, he swigs from his water bottle but always ends up spurting it high into the crowd.
Eventually he dives into the swarm of warm, welcoming flesh and is passed around until he gets mauled by the frenzied ones. In Tucson he makes his leap during 'Zombie Eaters' - a typically double-edged Faith No More song. It begins softly and gently with the singer proclaiming pure, total, undying love for a lady. But halfway through it changes gear and the singer is revealed as a baby, all demanding, possibly malevolent, blackmailing its mother into catering for its every whim. When he's completely enveloped by the clawing, baying hounds. Just before they tear the microphone away, Patton lets out a blood-curdling, eardrum destroying scream, it comes at a pivotal point in the song and performance, a cry that's charged with all the misery, mastery and mystery of childbirth. For a split second the passion of the singer and the frustrated clamour of the crowd attains a defiant, exultant
peak.

Like the song says, it's a dirty job but someone's gotta do it. And they might just be sick enough to try.