FAITH NO MORE reunited at Download Festival 10 years ago! 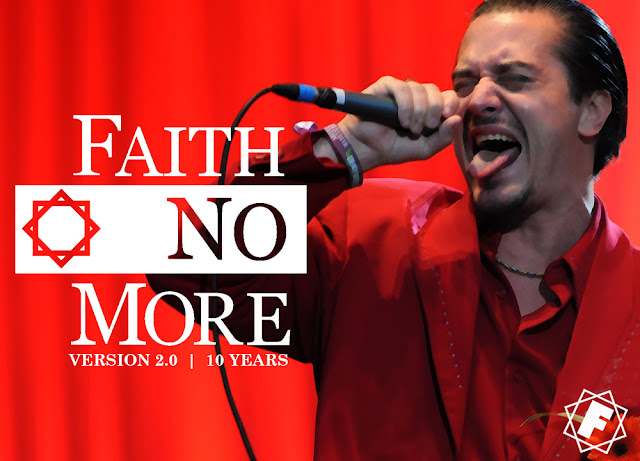 Faith No More played their first headline slot at a major festival in eleven years on June 12th 2009 at Download Festival in the UK.


Reunited And It Feels So Good

"I was always a big fan of Faith No More, and was lucky enough to promote a number of their shows in the early days of The Real Thing and Angel Dust. The band hadn’t played together for a long time, and I felt that if we could put an attractive proposal together to present to key members of the band, they might consider it." - Andy Copping

Get ya reading goggles on and check out Adrian Harte’s book Small Victories : The True Story Of Faith No More and you can read how Download Festival booking agent Andy Copping was in negotiations to get our boys back on stage a year before they reunited.

On June 10th 2009 the dream was realised at Brixton Academy and for us lucky few who got to be present it was fucking unbelievable to experience the impossible.....FNM back together.

It’s pretty hard to compare a show where we were close enough to smell the sweet bouquet of the band's button holes to Download Festival on June 12th 2009, you could likely fit ten Brixton Academy’s between us and the band. We heard the live feed however we saw the performance on a gigantic TV screen. In fact it’s only when pro footage of the show was released months later that I actually viewed it in full.

But fuck it we were there to witness their triumphant return, and what I am able to report on is the reactions of 40,000 metal heads. This sea of black t-shirts had just been treated a host of nu-metal superstars including Korn and Limp Bizkit, both of which were no doubt shitting themselves in support of the very band who inspired them to make music. My guess was that a large percentage of the crowd had never seen the main act, and that some had never even heard of Faith No More. So when four slightly greying / balding dudes dressed like they were playing at a wedding in Vegas strolled out onto a stage that looked like the dream sequences in Twin Peaks (won’t have heard of that either) there was an understandable murmur of discontent. We however knew that this mixture of youngsters and veteran moshers were in for a thrill.

FNM certainly didn’t set out with any attempt to win over the of Emus (or whatever they are called) or placate returning fans as Roddy Bottum’s dreamy keyboard intro to the Peaches and Herb 1978 classic Reunited floated out over bemused faces into the Midlands skies.

I heard metal head one say ‘What the fuck is this shit?’, and metal head two scream ‘Why the fuck are these headlining?’. While number three cried ‘Where’s Patton?’.

He didn't have to wait long before Mike Patton limped onto the stage with the aid of a walking stick and dressed in a sequined red suit to a chorus of cheers. This was an underwhelming appearance of the singer for some and it just heightened the fear in their nightmare, what the hell was Mr. Download thinking?

FNM had been on stage a full 5 minutes before the multitude got to hear what they paid their money and pitched their tent for as Mike Bordin's familiar drum intro to The Real Thing vibrated from the wall of speakers. When Patton bellowed ‘I know the feeling....’ he was joined by 40,000 jubilant voices. When the song powered into Jon Hudson cranking out it's galloping guitar riff the sea of black shirts moved as one and metal heads one to three were finally happy.

There were moments of bliss as my group of friends danced like native Americans around a campfire (20 foot TV monitor), we marvelled at Patton singing Lady Gaga's Poker Face,  we huddled together and sang Easy and we relived our youth. As we exited the festival on the bus, still buzzing we overheard some long haired dudes in KillSwitch Engage shirts who were discussing FNM ‘Those Guys were fucking dope’.

Any way don't read my rantings when you can read a professional review of the gig from those chumps at Kerrang!

Most are here to see Faith No More, whose singer, Mike Patton, looks like he is having the time of his life. An opening cover of Peaches and Herb's 'Reunited' sets the tone for a set that's both humorous, leftfield and, hence, brilliant. Ever a band for who the unexpected can be expected, tonight in a drunken field, they are an absolute delight. Welcome back, gentlemen.


We Care a Lot