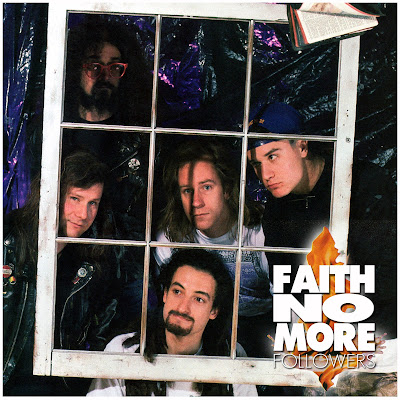 San Francisco's FAITH NO MORE: Hip or Hype? Mark Putterford wanders into earthquake town to discover if these West Coasters are tuned into 'The Real Thing'

WHETHER IT be rucking with their former singer, violently abusing their fans or simply testing the boundaries of obnoxiousness. Faith No More have always courted predictions of self destruction. Unconventional, uncouth and largely unwashed, they've been a boil on the backside of tuneful civilisation, squelching with the pus of inner turmoil and middlefinger anarchy, ready to explode or more likely implode at the slightest prick. By all accounts, former frontman Chuck
Mosley was indeed a bit of a prick. Despite adding an appropriately sneer-lipped, beer breathed vocal to the festering Faithful sound on the bands down-and-out-dirty debut LP 'We Care A Lot' and the follow-up 'Introduce Yourself', Mosley found himself out on his ear in the Spring of '88 after the well-documented hatred between him and his colleagues (guitarist Jim Martin, bassist Bill Gould, drummer Mike Bordin and keyboard player Roddy Bottum) reached an unbearable level. Yet even when, against all odds, FNM resurfaced with a new vocalist, Mike Patton, a new album 'The Real Thing' - which is highly rated to boot - and a world tour schedule demanding enormous discipline if it is to last until this Spring, the band's critics have refused to drop the image of an outfit many seem to hope will destruct while that masochistic magic still lingers.
But are Faith No More the band the press loves to portray, or are they big boys now? Seedy sickos or serious musos? Party animals or sheep in wolves' clothing? Hip or hype? Hit or myth? They're certainly sprung 'From Out Of Nowhere', but are they 'The Real Thing'?

THE FIRST week of a new decade, a breather during a sprawling transatlantic tour that has seen several visits to Britain quickly stimulate FNM's standing and reputation over here. On the eve of yet another, the five are kicking their heels at home.

SAN FRANCISCO, a city where if AIDS or earthquakes don't get you, Anchor Steam beer certainly will. A place of contrasts; a place where shimmering opulence brushes past street-comer poverty, yet ultimately a picturesque Californian outpost more pleasant than most of its US counterparts. A small city (population under a million) fittingly fragmented with established ethnic strongholds such as The Mission (Mexican), North Point (Italian), Hunter's Point (black), Japantown, Chinatown (encompassing the largest Chinese population outside of China) and even The Castro, home of the city's hugely conspicuous gay community. Faith No More are a product of San Francisco, and they're casually at ease with its quirks and faults (ouch!). "Earthquakes are a lotta fun," says Roddy, they're not as bad as people make them out to be. OK so some people die, but for everyone else it brings a little excitement into their lives; it's like the whole city being on a rollercoaster ride - real cool."
It must be said that the band missed the last major 'quake in October - they were on tour in Newcastle at the time! - but the effect of the disaster still shows in their hometown. Some major freeways are still closed, many buildings have been pulled down, and even in Mike Bordin's apartment there are cracks in the wall and ceiling to
provide evidence of the tremor s severity. "But it brings people together," protests Bill, "gets strangers talking on the street." "Yeah," spits Jim, "and while you're talking, a little piece of their spit hits you in the eye and you catch AIDS. "
It's a rare moment of humour. "A friend of ours died two days ago from AIDS," says Roddy. "He didn't even know he had it, but he suddenly caught pneumonia, went into hospital and died four days later." 'The scary thing is," adds Bill, "he hung out in a social group of about 30 people and they all shared their drugs an' stuff. So now there's about 30 people we know who could die within the next two years."
"Yeah but fuck it," Jim snarls again, "living till old age is the slowest, longest and most painful death of all, man. Id rather die quickly, enjoying myself, than hang on for months in a hospital when I'm 85."
Its a hardline attitude born out of a city where black dudes push crack' with guns", where kids as young as ten sell cocaine outside sweet shops, where boys even y o un ger are prostituted in the sleazier gay areas and where, for all SF's laid-back charm, people are more than a mite screwy. "There's a wood over there," Bill gestures during a tour of the city, "where guys hang themselves from trees while they're jacking off. It's supposed to heighten the orgasm, 'cos you're stopping the flow of blood or something. Oh yeah, the cops often find dead bodies where the noose has been too tight and the guy's killed himself."
Yes, San Francisco might be known as the most European of American cities, but it's hardly Milton Keynes.

EVER SINCE they set out as Faith No Man in the early '80s, this bunch of self-proclaimed "experimental weirdos" have dared to be different. They even attempted to play every show with a different singer at one stage, just allowing each instrumentalist to tip his own influences into a melting pot of "strange shit" There was the Black Sabbath School Of Metal from Jim Martin (who, you may know, learnt his licks growing up alongside late Metallica bassist Cliff Burton), the Punk background of Bill Gould, the "anything and everything" preference of Mike Bordin (whose CD collection even stretches to the music of Tibetan Buddhism!), and the textures of the Classically-trained/ unfortunately named Roddy Bottum. Mike Patton is the new kid on the block, a 21-going-on-15-year-old brat with a cucumber-cool voice that can switch from loose-laced Rap to lung-busting Metal with cocksure ease. His addition has certainly brought a more cohesive element to the Faith camp, but the fact that he still doubles as frontman for his previous band, Mr. BungIe (who, he claims, play "Psycho-orgasmic epilepsy music with Funk, Rap, Metal and a whole lotta twisted Jazz shit ), means that FNM retain an unpredictable edge. Asked if he'd leave FNM if Mr. Bungle got a recording deal, he replies: "Yeah!"

WHETHER IT'S all part of their image or not, the five members of Faith No More still don't seem to like each other too much. Jim Martin, moody, caustic and unpredictable, even got up and left the room shortly after our interview began, disappearing into the toilet with one of Patton's porno mags, leaving one or two of the others biting their tongues. "The truth is," Bordin explains, we do have problems. But what the fuck? Do you want me to tell you everything is wonderful and we all love each other? That's bullshit when bands say that." "Too many people make too much of the 'so-called personal conflict' within this band," adds Bill. "Shit, we're all individuals, and in any case, if you put five starving people together then you're gonna produce conflict."
The band have certainly seen tough times. Roddy even used to sleep on a pile of dirty laundry, which was also home to a mouse at the same time. And in the early days they all endured a 'Filthothon' - a contest to see who could go the longest without washing. The dreadlocked Bordin won, going a year without washing his hair, and growing nails so long he could scrape cheese off his scalp. Times have changed now; the band have the support of a major record company in the UK (London Records), a truly superb album in 'The Real Thing' that should pave the way for financial reward, and even better times surely around the comer. "Were more committed, more consistent and more confident now," says Roddy. "And the bottom line is," adds Bill, "that we do what we do well, everything else is secondary. We know that especially in America you have to pull some scam to get ahead, and with most bands here there's about 70 per cent hype. But we like to think that the reason why we're happening now - especially in Britain - is because kids are beginning to know we put on a great live show." "When we first came to Britain," Roddy notes, there was a lot of hype. The press said we were the 'next big thing' an' all that shit. But we wanna get away from this." "Yeah," belches Bill, "the music business is just one big fraud; all this hype is just the people who're making money out of it trying to perpetuate the Rock myth." "People ask us to give them wild 'road' stories," sez Mike (B), "so they can pretend you're a real zany Rock 'n' Roll guy. But I'm really boring. I just like to sit at home with my girlfriend watching TV all the time." None of the band can muster up even one juicy, dirt-digging 'road' story for RAW, and none of them appear to show enthusiasm for anything other than getting onstage and playing. Are they really just painfully ordinary and rather moody people for whom an image has been manufactured? Or are they now just opting to change their image to shift the emphasis onto their burgeoning musical prowess? The answer is: It's an equal split of both. "All we wanna say is: We've got a great album out and we're touring Britain soon," (starting Jan. 27)," so you'd better come and see us live," deadpans Bill. That s the truth in its most boring form. Faith No More are going to be one of the biggest bands of the 90s - providing they still want to be in six months' time. 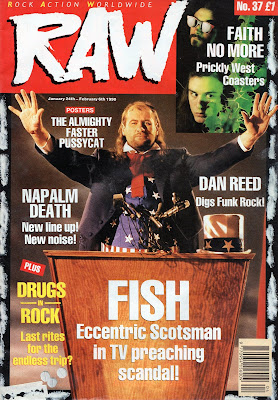