THE REAL THING 30 | The Unseen Glitter Of Life (My Story) 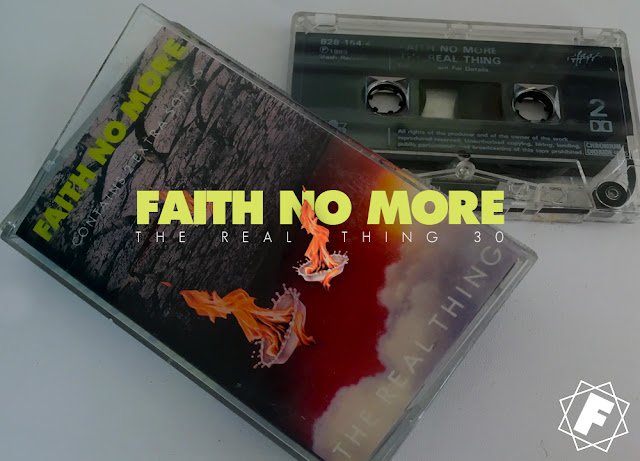 At the respectable age of forty two music remains one of my ultimate pleasures in life. Why, because it takes me to places not much else can.
It's easy to recall when it all started, I can pinpoint it to one moment in time and the one album which triggered...it. What is it? It’s....erm....it!

Late 1989.... I was twelve and hadn’t discovered the true joy that music could give. My diminutive collection of albums consisted of Michael Jackson Bad, Madonna True Blue, the Teenage Mutant Ninja Turtles soundtrack and quite possibly the only cool addition The Lost Boys OST. However due to class room chatter I was closer to finding focus and leaning towards guitar based bands; Guns 'n' Roses and Bon Jovi were on my radar.

If you have an older sibling you will be familiar with the hierarchy they command and the torture they inflict. As well as wrestling me into submission my brother, who has always has impeccable taste in music, would attempt to educate by cornering me in his room and streaming David Bowie, Queen, Black Sabbath and the Sex Pistols into my reluctant ears. It struck me that the album sleeves were creepy, they smelt unpleasant and it was so awkward to place needle to vinyl. Too naive and obstinate to appreciate this aural bombardment I would escape to the safety of my own four walls (complete with orange cartoon feline decor) and listen to popular sounds that made sense to a young boy not yet taken by the alternative scene.
It was after school one day in early 1990 when my brother would provide the necessary intervention that would change my life forever.

He was blasting out a din I didn’t care to make out, then silence.
‘Here’, he exclaimed as he burst into my sanctuary, ‘this sounds like the crap you listen to’.
The cassette tape, which had narrowly avoided my head, lay on my bed for an hour or so before I eventually picked it up out of curiosity.
Scrawled in particularly tidy blue ink was the title Faith No More - Real Thing. Someone had obviously taken pride in writing those words .

No religious associations were made as we were not a church going family, however I did have a compilation of songs recorded from the radio which included George Micheal. My mind instantly connected the song title Faith.
As mentioned earlier I hadn’t yet developed a loving relationship with music quite yet and I had a Sony dream machine cassette radio alarm clock, which would wake me up each morning with the un-equalised sounds of Slippery When Wet.

I sincerely hope you can remember the very first time you heard Faith No More. Like the first time you made love, the first taste of alcohol, like the first drag of a cigarette, the first line of cocaine (too much?) From Out Of Nowhere filled my entire body with an unrecognisable warmth. This musical intoxication sent my head spinning and body jerking. A first experience of euphoria.

I know the feeling. It is the real thing. The essence of the truth...

Laying on my Garfield covered bedding for fifty five minutes I soaked in every one of the eleven tracks. Epic, Falling To Pieces, Surprise! You’re Dead!...so much diversity. Zombie Eaters and The Edge Of The World...so many extreme dynamics. Side B. The Real Thing, Underwater Love and The Morning After...such darkness. Woodpecker from Mars and War Pigs...what power!

I must have listened to the cassette another four or five times in a row, each time finding new exhilarating moments. The clearest possible way to illustrate those feelings would be  to simply quote lyrics from the album's title track.

The pinnacle of happiness. Filling up your soul. You don't think you can take any more.You never wanna let go...

It’s not easy to explain exactly what attracted me so much to this music. Maybe it was the familiar pop and rap elements, maybe it was Mike Patton’s melodies or Jim Martin's guitar? There was no doubt that I was hooked and this was a catalyst I had unwittingly been waiting for.

The Real Thing soon became the only album worth listening to and soon I could recognise every note and recite every lyric, well the ones i could decipher not having the linear notes proved difficult with songs such as Surprise! You're Dead! . Now the music had saturated my very being it was necessary to discover more about the musicians.
In the early 90s our household wasn’t lucky enough to have satellite television and the only terrestrial TV shows that paid attention to alternative rock music were given 3am time slots. Therefore I turned to Kerrang! for help. Luckily FNM were featured heavily in their pages as it seemed that I was not the only one under their spell. The very first poster of the band to hang on my wall pictured the most unlikely five characters I could’ve imagined, these chaps were a world away from the tattooed street urchins of G'n'R.

With the aid of VHS timer record I soon saw live footage and promo videos, the eccentric way the band presented themselves spurred on my own character development and it wasn’t long before I was acting out Patton's stage high jinx on the school playing field.
My first FNM t-shirt, four long haired men (and Jim) in underwear on the front and the slogan you fat bastards on the back, earned me my first ever detention at school. It was worth the scolding I received just to share my new found identity with class mates on none uniform day.

You see FNM, unique as they were, had made me unique. I was the only kid who listened to them which for the first time made me different...I was interesting. 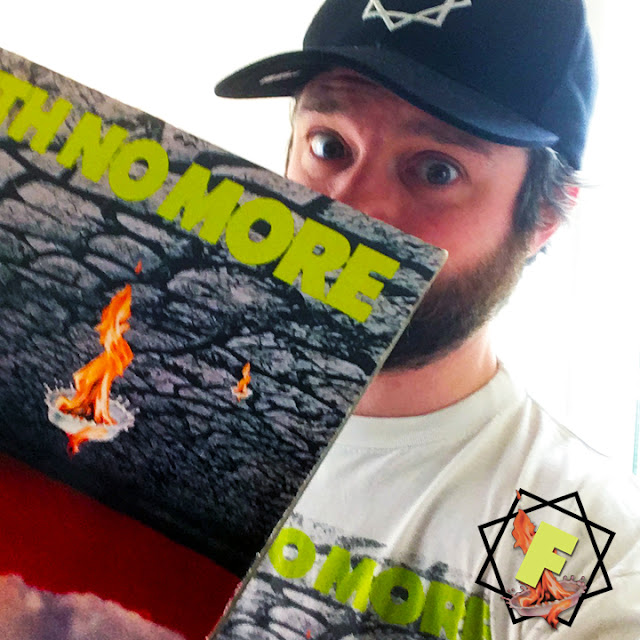 'Cause it's the root of experience. The most basic ingredients. To see the unseen glitter of life. And feel the dirt, grief, anger and strife

By the time my family set out on our summer holiday in 1991 to a quiet village on the south coast of the UK I was wearing waistcoats, backward baseball caps and hadn’t paid a visit to the hairdressers in a long time. My only goal on this holiday was to replace crudely copied and now battered cassettes with shiny new versions using the pocket money I had saved from the first week. This of course meant staving myself of ice creams and reluctantly passing the arcades without so much as a fifty pence piece in Street Fighter. My parents probably thought I was entering some difficult adolescent period, but I was nothing but focused.
So after a rather boring but necessary seven days I found myself in a record store and headed straight to the F section. Without hesitation I snapped up a copy of  Live at Brixton, Introduce Yourself and The Real Thing (We Care A Lot was still a rarity at this point). This was the first time I'd seen the album artwork up close and I couldn't wait to rip off the plastic to explore further.
As I took out my Ninja Turtle wallet to pour out coins onto the counter the assistant (who looked rather impressed a guy of only fourteen would even know who FNM were....probably) did his sales pitch and casually pointed out that Brixton was also available on video. This caused a dilemma, buying the video would mean no arcades for the second week as well?!
Needless to say I spent the following seven days wondering around the village trying to persuade pub landlords to let me commandeer their VHS player for an hour or so.
When I finally scanned the linear notes I was amazed at the actual lyrics after guessing so many for so long (Patton's nasal tones were always to easiest to translate). My vocabulary was improved from taking in the words used.

It's the jewel of victory. The chasm of misery. And once you have bitten the core. You will always know the flavor

This was detonation. Kaboom! An obsession for the vinyl, cassettes, CDs, T-shirts, bootlegs, posters, magazine clippings.... I had blasted off on the exciting journey into musical geekdom!
Record fairs became my new amusement arcades and the mildewed smell of old vinyl, that had choked me before in my brother's room, was like the fresh smell of unpacking a brand new action figure. Maybe I was born with the collector gene, as a child I preoccupied with owning every Star Wars toy and swapping Thundercats stickers in the playground. This gene just needed the right subject to fuel the passion. Gone was that ridiculous lasagna loving cartoon shit and my room became a living poster book dedicated to the band.

The Real Thing also had given me an ear for alternative sounds and pointed me in the right direction in discovering even more music. Primus, Pearl Jam, Therapy?, Mordred, Rage Against The Machine, Soundgarden and Stone Temple Pilots....anything that broke the rules and was cast outside of convention.

You're growing a life within a life. The lips of wonder kiss you inside

It was in late 1991 that I returned to the hairdresser a rolled up Kerrang! under my arm, leaving with that infamous undercut Patton sported during the band's south American tour.
Always being a bit of a show off and demanding attention from adults by prancing around like Billy Elliot, under the inspiration of my new heroes it made sense to try my hand at being a musician. After piano lessons had bored me to tears the next logical step was singing and as it turned out I was pretty good.
Myself and a rag-tag bunch of G'n'R fans soon began commandeering the assembly hall after school. Nirvana covers would ring out against the 350 year old walls and teachers would often demand 'we shut the hell up!'.  I got away with imitating every one of Patton's moves because no-one else in the band had watched Live At Brixton.
Years later singing would provide a solid income for me and my family and to this day music is my career.

Like the echoes of your childhood laughter, ever after. Like the first time love urged you to take it's guidance, in silence. Like your heartbeat when you realize you're dying, but you're trying. Like the way you cry for a happy ending, ending, ending

It wasn't until 1992 and the release of Angel Dust that my coming of age was complete. Another long and tedious story indeed, but you can read it here.

The conclusion to this coming of age tale is that Faith No More were there to guide me. The band influenced my appearance and attitude. In short The Real Thing changed my life.....

I know the feeling. It is the real thing. You can't refuse the embrace