CAN YOU FEEL IT, SEE IT, HEAR IT TODAY? IF YOU CAN'T, THEN IT DOESN'T MAKER ANYWAY...

"There were probably like 5,000 people spitting on me... people were yelling and screaming 'Get off! Get off so loud their veins were bulging out of their necks! I was laughing so hard - it was a great thing!" recalls Faith No More's bassist Billy Gould.
He's talking about the lime when the metal/rap/punk/funk/weird shit outfit supported fellow San Franciscans Metallica for a month late last year. But what did Faith No More do to elicit such a dramatic response from the crowd?
"People were just staring at us and looking at us, and we got kinda angry because we were putting in all this work and people weren't giving anything back. So we started insulting them a little..."
I guess you could conclude from that incident that Faith No More are the type of band who don't really give a flying f_k. But then again, if you're a fan of their unique brand of musical mayhem, you'd already know this. And if you're not... well, they probably don't give a flying f_k. Billy called from Los Angeles just before Faith No More's Australian tour was confirmed ("We're taking our first break in almost a year - we have about 10 days!"), and mine was the last in a line of about six interviews. "I've been doing these interviews today," he chuckled wearily, "and everybody was saying, 'Oh, your new record is coming out in a week,' NEW RECORD?! We've been touring that (The Real Thing) for a year now!"
The reason Billy had to cope with the torrents of meaningless, outdated questions was because Mushroom Records in Australia have just decided to release The Real Thing now, FIFTEEN months after it came out in the U.S. Now, to give credit where credit's due. since Mushroom did release it, they've done an excellent promotion job; ads all over the place, getting it played on video music shows, the whole bit. But the question which must be asked is why? Why only now? Why not last year, when The Real Thing, to rapturous applause, hit a world-wide market hungry for something new. "The bottom tine is," reckons Billy, "you have to convince the people who are promoting you that they're excited about it, and the only thing that's gonna show them that they're excited is that there's a demand for you already. And when you're playing weird music like us, you really have to show them!
"None of the success that we've gotten has come from the record company. It's happened because there's been a lot of word of mouth, and interest from people that have bought the record.
"You'd be surprised at the people working at some of the stinking record companies. Most of then don't know shit! Who knows how they got their jobs? But rather than sit and complain about it, we just get on the road and tour our asses off."

Time to clear up that rumour; no, Mike Patton is not leaving Faith No More as I'd been led to believe before I spoke to Billy (kinda ruins all the questions you've prepared about the new singer when you realise that there isn't one..!).
"It's funny that story's made it all the way down there, huh?" he laughed when I asked him. "It's just some crazy rumour thing. We laughed about it. At our last show in Paris, we told everybody that it was Mike's last show!
"The rumour came from somewhere in San Francisco apparently. The London magazines heard it and said 'Well, we heard it from a source in the States'. We managed to trace it to a source back in San Francisco.
"And then some girl in Texas showed up at a radio station, and told the DJ that she was Mike Patton's girlfriend and said that he was leaving soon."
As is widely reported, Patton is still involved in Mr. Bungle, the band Faith No More snatched him from after their original vocalist Chuck Mosley was unceremoniously sacked. In fact, he has been quoted as saying that if Mr Bungle ever got a record deal, he would leave Faith No More. So maybe it's not so surprising that rumours about his departure are springing up. Gould, however, denies that Patton would quit Faith No More. "No way. If he ever did, that would be the stupidest decision of his life, because really, they're two different bands. He knows that.
"Mr Bungle's a great band, but it's just a different thing; it's just a bunch of friends that he grew up with that he plays with. It's nothing to take seriously, and he'd be the first to say that he doesn't take it seriously."
Dare I suggest that this is another example of the infamous Faith No More 'inner tensions'..?
"Well, there's always that. There's always inner tensions, but it hasn't got that bad...yet! It might, but y'know, if it did, I'd tell ya...
"We've just had to work real hard the past few years under less than favourable conditions. We kicked out Chuck because he just wasn't putting in 100 per cent like we were, so we had to put in 120 per cent to compensate for him.
"Mike Patton has been really hard working, but it's just been really hard work, so there's times when you just get pissed off. You take it out on each other, of course..."

And  while on the subject of Mike Patton, Gould also took time out to deny claims made recently by the 'Chili Peppers' Anthony Kiedis that Faith No More's dynamic vocalist has... dare I say it... ripped him off, "That's an interesting one. I don't think he has, really. Y'know, we're not threatened by each other, because our music is really a lot different. The similarities are there in a superficial way, but really, there's a huge chasm between us. We are kind of on
different sides of-the spectrum - we're on the rock side, and they're kinda more on the traditional funk side."
All this talk of funk brings to mind the multitude of 'funk/metal' bands that seem to be springing up all over the bloody place. Billy's view of this recent fad is...
"F_k 'em - I don't give a 1_k! I don't give a f_k about any of them, I just don'1 care.
"The 'Chili Peppers are a great band, and I think that Living Colour had a lot to do with this funk rock thing, because they... got popular. They pushed, and they toured for a year before their record even got attention. And they worked their asses off, and basically created an opening for a category, just like Guns N' Roses kinda made the rock/glitter thing what it is. Guns N' Roses were getting played on commercial radio, which was at the time unheard of for a rock band like them in the United States. And then when Metallica got played on MTV... that was unheard of for a metal band like them. But they did it.
"Anyway, what I'm trying to say is that there's a lot of bands that saw this happen, and now there's the inevitable flow of copiers.
"Y'know, we get classified with this funk/metal thing, and really *e've gol nothing to do with it at all. I mean, we listen to metal music and we listen to funk music, but we're just kinda playing what comes out of our heads. It's kind of a shame to be put in some trendy category to make some advertising guy's job easier, some writer's Job easier, or the record company's job easier. Really, you're kinda shortening the life span of your group and you're not taking
something at face value - you're comparing it to a category.
"Did that make sense..?!"
It sure did.
"The title funk/metal really annoys me. Any band that comes out that says they're funk/metal, my first impression is not to give them a first listen. I'm not interested."

Faith No More seem to have recently almost 'broken big' in England, playing to larger crowds every time they hit those shores, and even appearing on pop music show Top Of The Pops on their last visit. Ironically, the band seem to be much more appreciated in the U.K. than in their
own country.
"I think people are a lot more open minded in England and Europe," says Billy, "cause they have a lot more access to independent records. They've got bands like Napalm Death and Carcass.
"The States is just such a commercially orientated place. In England it is too, but it's different. There's independents, and there's independent distribution, and people are just exposed to it even if they don't like it. They have access to it.  They have music magazines like the NME that will write about Whitesnake and The Cult. then write about Napalm Death, and then write about Sade.
"In the United States, there's nothing like that at all; it's completely categorised, because it's such a large country. And because there's so much money being generated, because there's so many Americans buying records, it's really a big business - a super-big business. It's almost impossible for the independents to get decent distribution.
"So what you're getting is an industry that's really creating the people's demand, and people are buying what the industry is giving them. It's all above ground, commercial stuff, there's no underground. Only the bands that really kick arse and work their f_king arses off - like say,
Metallica, who just toured for ever because they were making sure that they weren't just gonna be a forgotten thing - get out of the underground."
And they sure as hell aren't a forgotten thing now...
"No. And when they do get out, they shake things up, y'know? And Metallica were really smart, because they had a good thing, them and Slayer.
"But now there's so many speed metal bands coming out of the States that every major label has signed a speed metal band. They don't even know what speed metal is, most of them. They're just like, 'Oh, this Metallica thing did real well - we don't
understand it. That one sure slipped by us!' "This is the mentality in this country. So many shit bands. It's an industry, a business."
Getting back to the talk about English magazines, it must feel weird to be in a band that gets rave reviews for practically everything you do. I don't think I've ever read a bad thing about the band...
"There's a couple coming out this week, actually. In the NME there's a pretty big slag. It says that at our show at Hammersmith we looked like bloated old rock stars, which is pretty funny. It's funny too because they also say, 'Oh, but of course the crowd loved it - they lapped it
up,..', which goes to prove the old expression 'Eat shit - a million flies can't be wrong!'
"Y'know, you're talking about a writer's personal opinion - it was a great show and everybody loved it, and there's one nasty bastard up the back sitting in the corner who decided he hated it.
"But it's to be expected. I mean, you can only get good things written about you for so long..."

Maybe so, but I have a sneaking suspicion that Faith No More are a band that's gonna command more salutations than slags for a long time to come.
"If you're not gonna like us, then you're gonna hate us," Billy concludes, "so we're gonna make sure you hate us! We're gonna get you to move one way or another, you're not gonna sit there like you're watching a movie. Our shows are audience participation 100 percent..." 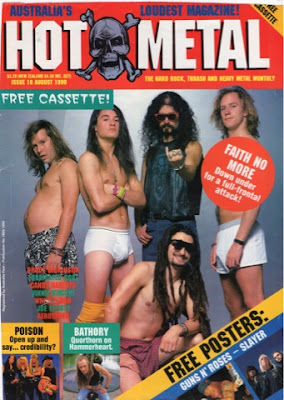