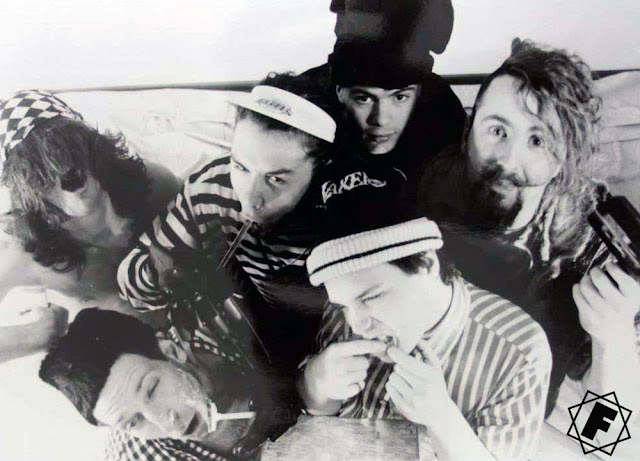 "I think it explains itself. Just buy it. Anyone who can't figure it out is a poser. Death to false metal."

Faith No More had just released The Real Thing, their first studio recordings with Mike Patton, and before the band set about 18 months of constant touring Mr. Bungle took the opportunity to put down six songs. This demo was the first to feature Danny Heifetz on drums and Clinton 'Bar' Mckinnon on tenor sax, it completed the line-up which would go on to record and tour the first two Bungle albums to be released by Warner Bros.

The title is a parody of Van Halen’s 1988 album OU812 and Patton refers to the band during the demo’s intro, ‘Let me bust some Van Halen out one time’ . The band's extensive cover list also included two Van Halen songs over the years

"Obviously if we make an album it's not gonna be as disgusting as 'OU818'. That tape was a collection of our dirtiest songs." - Trevor Dunn 1990

Even though during the early 90s Mr. Bungle interviews were mostly bizarre and nonsensical,Trey Spruance outlined how the songs were written in a 1989 fanzine.

"A capsule of what happens: On OU818, Mike wrote 'Squeeze Me Macaroni' and 'Girls of Porn', but a lot of those riffs are my riffs that he used in his songs and he wrote the lyrics, so it's his song kind of thing. Same thing with Trevor, he wrote all of 'Slowly Growing Deaf', I wrote some of 'Love is a Fist' but he wrote most of it. It's all a collaborative effort, but we sort of lean towards things. One is one person's song and one is the other's. We get inspiration from all sorts of stuff. It's just sort of a general outpouring of crap. It's usually a spontaneous or on-the-spot thing that happens." 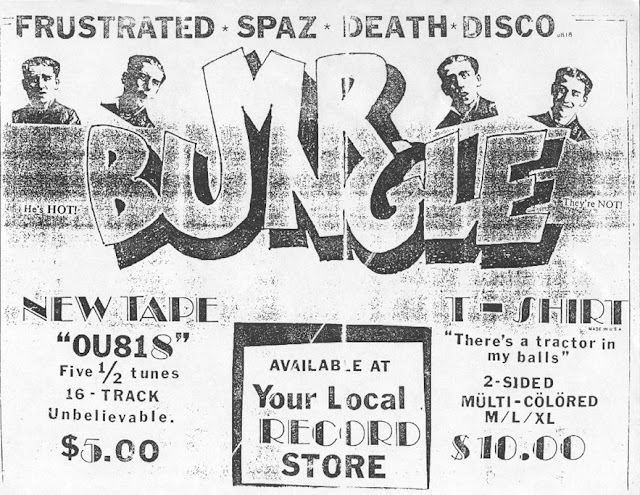 Thid demo features more funky tones than their previous recordings and is slightly more accessible, a point which Trey also spoke about.

"Well, because it's such a dumb thing, you can put it on in the background. It's like a party mentality thing and people are really into that at shows. They're into like shaking their asses and having bands be the soundtrack to their courtships. That makes us accessible to the party thing. In a way, OU818 sort of is a misrepresentation, but in another way, it's really close to us because we go into phases like that."

Of course Patton would use his new found position as the frontman in FNM to shamelessly promote his circus outfit by sporting the infamous ‘Tractor in balls again shirt’ onstage, for TV performances and interviews and in the video for Epic. The slogan was originally song name.
Patton's blatent advertising led the press to believe that he was leaving the ranks of FNM to return to Bungle. Bill Gould cleared up rumours in 1990 saying, "Mr Bungle's a great band, but it's just a different thing; it's just a bunch of friends that he grew up with that he plays with. It's nothing to take seriously, and he'd be the first to say that he doesn't take it seriously."


'Side one contains 8 minutes of blank space. Feel free to wipe your ass with it.'