FAITH NO MORE FOLLOWERS year end round up 2019. 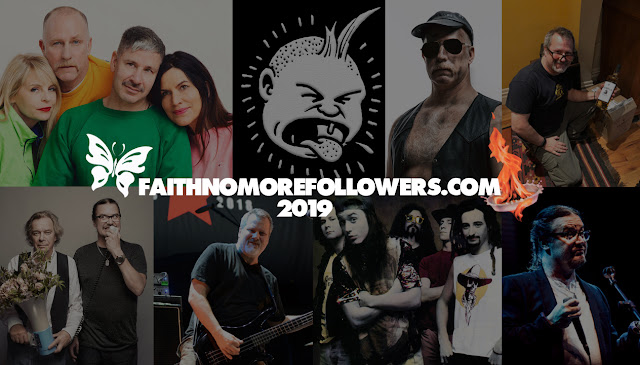 It feels just fantastic to write a summary of the past year as Faith No More Followers and having some outstanding events to look forward to in 2020. Our last couple of year end articles have been rather downcast and sadly absent of FNM news.

The biggest revelations of the past twelve months have been the return of Faith No More to the live stage for shows in 2020 and the reunion of Mr. Bungle members for shows in the U.S, but before we look at future events let’s remind ourselves of what happened in 2019. From Mike Patton's near miss singing the National Anthem at a football game to importing Bill Gould Balkan brandy, from Mr. Bungle featuring on The Grammys to Mike Bordin's baseball documentary commentary... Faith No More Followers covered it all!

Where do we start...

With some momentous anniversaries. In 2019 we rejoiced in ten years since FNM reunited and embarked on their Second Coming Tour. This included dates at Brixton Academy, Download Festival, and Estadio Bicentenario de la Florida in Santiago, Chile.

We celebrated twenty years of Patton’s label Ipecac Recordings and Bill’s Koolarrow Records. We spoke with various artists from both labels and interviewed Patton’s partner in grime Greg Werckman about making people sick for the last two decades.

"Yeah, these questions are not fair. Picking favorites is not something I enjoy. Being best friends with Mike and working with Mike has been a great honor. He is a real artist. His focus and attention is 100% on the creative process." - Werckman

We dedicated much of July celebrating twenty years of Mr. Bungle’s third album California. This included our interview of biblical proportions with guitarist Trey Spruance.

"If this wasn’t coming from such a supporter of Mr. Bungle’s music, it would be one of those abrasive questions that anyone in the band would wince at. But you bear no fault for asking it, realizing most bands operate very differently than Mr. Bungle did." - Spruance

Our friend Adriano Mazzeo conducted a whole bunch of interviews [part 1 / part 2] in celebration of the third Bungle record including Ben Weinman, Justin Pearson, William Winant, Bär McKinnon, Trey and Trevor Dunn.  Other interviews worth a mention were conducted by The Vinyl Guide Podcast, who spoke with Trey and Kristen Yee about Mr. Bungle.

However most important anniversary of the year was thirty years of Faith No More's third record The Real Thing. #TRT30 was trending like crazy! Uncharacteristically, the band themselves joined celebrations of the album's legacy.

"First record I ever made and am forever grateful. Was an 'on the job' education for me and think as a band we went through the Fire together, better for it on the other side!" - Patton

We had the privilege of hosting an insightful Q and A with the core members Bill, Roddy and Mike B.

"In general, I stand by no regrets. The album, songs, and performances reflect my best effort at the time, with the technology, skill, experience, and head space that I had at that point." - Bordin

We also spoke with Greg Puciato about the influence of The Real Thing and Matt Wallace about the albums creation, Matt also sent us some never before seen in the studio photos.

"Working with Patton was like trying to ride a bull or a racing motorcycle in that he was absolutely prepared to write and sing and deliver the songs and he was (and still is) an exceptional singer. He and I had disagreements about ‘tone’ and the fact that we weren’t able to capture the full range of his voice. But, I don’t believe that I’ve ever worked with anyone who was built to sing like Patton because he made everything sound and appear to be effortless but, if you really listen, he’s doing some amazing singing, phrasing, and lyric and melody writing." - Wallace 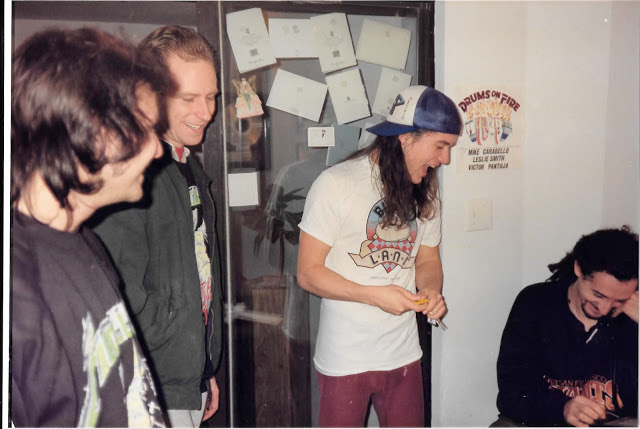 2019 was not all about nostalgia and we have not been starved of new music from our boys in the last twelve months. Bill featured on Celestial Mechanics, a record by Shane Embury’s band Tronos.

Roddy Bottum was super busy as always and we witnessed the welcome return of Imperial Teen who released their sixth album Now We Are Timeless in July. The keyboardist also introduced us to two new projects Nastie Band, who's debut album was released in July, and Crickets who have music coming in 2020.

Mike Patton had a relatively quiet year with only one studio album! The macabre and infectious  Corpse Flower, his collaboration with Jean-Claude Vannier was released in September.

“[It's] Very, very lush,” Patton said he’s “doing a lot of crooning in different languages, and the instrumentation is all over the map.” And when asked if the album will it contain Gainsbourg’s signature sexy lyrics “There are plenty of those, don’t worry, they just don’t sound so sexy in English.” - Patton

Patton also lent his composing skills to the supernatural horror series NOS4A2, based on Joe Hill's bestselling novel of the same name.

Our hearts broke when we heard stripped down tracks from Chuck Mosley who recorded two cover versions before his tragic passing which were released for Record Store Day.

Trevor Dunn spoke to us about his project Nocturnes which featured five pieces of classical chamber music and was released via Tzadik in April.

"Ageing is a strange phenomenon in regards to  how old one feels vs. how one’s literal age sits in societal expectations.  I’m surprised by my age when I see it written down, but there is no contending with the grim reaper regardless of age." - Dunn

The members of FNM thrive on performing live. As we mentioned earlier, in January Patton announced he would be singing the National Anthem at a NFL game, Dallas Cowboys vs LA Rams.  This, and a performance at the Chris Cornell tribute concert, were cancelled due to 'ill health'.

Thankfully we saw the singer fighting fit when Patton treated Italy to two breathtaking concerts with his ambitious orchestral outfit Mondo Cane. On Saturday August 31st Patton,  performed in the Prato Piazza Duomo to a sold out crowd, with the inclusion of a stunning rendition of Mr. Bungle's Retrovertigo. The second  concert of took place on September 2nd at Teatro degli Arcimboldi in Milan.

During September Bill was back on the road with Wayne Kramer and MC50 for shows in the U.S and in October supporting Alice Cooper in the UK.

Roddy's schedule was jam packed. In the summer he performed shows with Imperial Teen. He also did gigs with Nastie Band, Crickets and a one off date at YOLA DÍA festival in Los Angeles with Courtney Love.

As well as making music the FNM members revealed some other interesting projects during 2019.
Well, Bill did.

"Not a lot of people know this, but from decades of touring and travelling the Balkans I have become very attached to a popular spirit called rakija. It's been made for centuries in the area but it seems that not many people in the US know what it is; and if they do, they seem to only be familiar with the nasty stuff." - Gould


Bill helped Faith No More Followers make national press in The Balkans with an interview about Yebiga, a fruit brandy concocted by Bill, brewed in Serbia and imported to the U.S.


Not content with getting us drunk Mr. Gould also surprised us with a book.  Mausoleum of Imperfection is a collection of picturesque and satirical portraits made by the artist and famous Balkan pop-culturalist Slavko Krunić accompanied by short child-like stories written by the bassist.


More reading material was on book shelves when Reintroducing Chuck Mosley: Life On and Off the Road written by Doug Esper was released in December. The narrative of this novel is a touching description of the author and Chuck's time together and a must for fans of FNM.

Once again thousands of voices will be chanting 'You Fat Bastards' as Faith No More tour in Europe. The band have announced concerts at smaller venues across the UK and headlining slots a various festivals. It seems inevitable that as we progress into 2020 they will reveal dates in more of their favourite countries, The U.S, South America and Australia.

As for new music, well this still remains a mystery. However it is highly likely that FNM will introduce us to new songs during their tour.

In September Roddy told Mondo Sonoro, "Well, that is very relative. I'm not sure, but I know that we respect each other very much and want to continue creating together; We talked about doing exactly that, so from where I am sitting, yes, I would say that sooner or later there will be new music."

Before we get to June, the most anticipated month of the last five years, we have Mr. Bungle performing The Raging Wrath of the Easter Bunny live in San Francisco, Los Angeles and New York to look forward to. Patton, Dunn and Spruance will team up with Dave Lombardo and Scott Ian to re-imagine the band's first demo.

"To have Scott and Dave with us on this suicide mission is more than an honor. THEY are a big part of the reason we wrote this stuff in the first place, and to realize it 30-plus years later with these maestros is an absolute miracle … we can finally play this teenage nonsense correctly! A total catharsis for us." - Patton 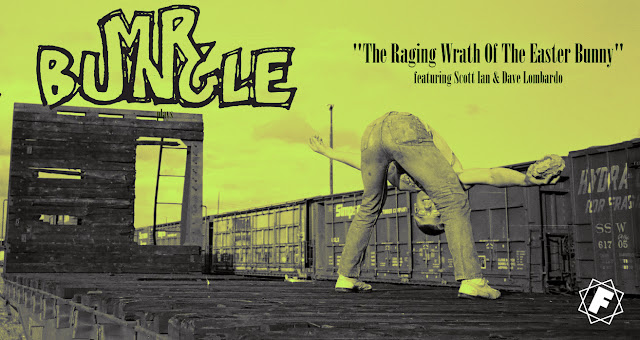 The set may include more music than the early sketchy recording as Trevor points out on his website, "We will also be unearthing a few gems from the ‘80s Crossover era that never saw the light of day as well as some classic covers. Stay tuned."

There have also been rumours that this incarnation of the band will re-record The Raging Wrath of the Easter Bunny.

Trevor revealed more than this on his website confirming that a new Tomahawk album is written and awaiting Patton's vocals, something that Patton corroborated during an interview with New Noise magazine.

During the same interview with the French publication Patton also mentioned Dead Cross would be recording again. More recently the band shared photos of Lombardo, Justin Pearson and Michael Crain in the studio.

Greg Werckman told us that "Patton has never been busier", so it would seem that 2020 will indeed be filled with glorious new music and gigs from the singer. Incidentally in the most recent Ipecac news letter, the label also revealed that a new Tetema, Patton collaboration with Anthony Pateras, will be out n 2020.

A final word on Patton projects expected in 2020, the man of a thousand voices will be onstage with Laurie Anderson on January 25th for a duet performance at the San Francisco Jazz center.

Bill Gould will start the year down under with MC50 dates across Australia in February.

Until the return of FNM we can expect to see Roddy release recordings with his new band Crickets. Imperial Teen will be on the schedule for Noise Pop Festival on February 29th at The Chapel in San Francisco.

Finally, Mike Patton and Mike Bordin have recorded interviews for The Baseball Furies,  an upcoming documentary directed by Jason Dummeldinger that looks at the unlikely but strong connection between counter-culture musicians and baseball, expected to be released in Spring 2020.

Thanks from Scotty, Luis and Jim.

To Bill Gould for his constant support, friendship and the Yebiga!

To Roddy Bottum and Mike Bordin for revealing all about The Real Thing.

To Mike Patton for only refusing two interviews this year!

To FNM management, Speakeasy Pr and all at Ipecac Recordings for the support and sharing our articles.

To Trey Spruance and Trevor Dunn for such in depth discussion on California.

Thank YOU. For commenting, liking, sharing and following.

We will continue to bring you the latest news and exclusive content. Bring on 2020!