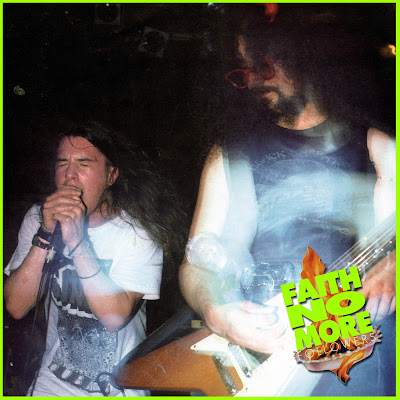 MORTAL SIN are Aussie Thrashers, and by the time I managed to brave the monsoon weather and Sheffield's one-way system, they are already well into their set.
Moshers are joyously leaping from the PA stacks, the band are cranking out suitably monstrous riffs, and vocalist Mat Maurer is giving it the obligatory gravelly growl. All is as it should be at a
Thrash gig. And yet that's just the trouble; Mortal Sin have plenty of enthusiasm and a good deal of technical ability, but very little in the way of imagination. Their album is okay and their live show is okay too, but there's nothing that makes them just that little bit special.
It could have been any one of a thousand bands up there, were it not for the Oz accents, providing a musical and cacophonic backdrop for people to act silly to. Fair enough, it's all good fun, but it's not going to make this band rich! 'Voyage Of The Disturbed' and 'King Of Avarice' might satisfy the primeval, but not the cerebral.

Forget Hurricane Gilbert, there's a hurricane blowing boys and girls - and it's called Faith.No.More. The signs were all there when 'We Care A Lot' first flattened the airwaves a couple of years back, Then the kollective Kerrang krew sealed the band's fate by voting their second album, 'The Real Thing', the best record of '89. And now I'm here in Sheffield, with the skies thundering and howling their approval with lightning flashes.
Faith No More have dragged Metal kicking and screaming into the '90s, and its way past time for me to see if the boys can cut it live.
After a protracted and evocative intro tape, the band saunter onto the stage, lulling us into a false sense of security before unleashing the torrent of pure musical energy that is 'From Out Of Nowhere'.
Although it's taking the sound guy a couple of minutes to get to grips with the stem-gun fire of guitarist (Very) Big, (Certainly) Sick And (Not quite So) Ugly Jim Martin, this is still something very special.
Why? Because FNM have got vocalist Mike Patton in their ranks, that's why. I Knew the guy was good from the record, but boy, can he ever cut it live! Wandering on stage like the bastard son of Alex in 'Clockwork Orange', Patton soon dispenses with his stripy pullover and pork-pie
hat to unleash a vocal performance of pure magnitude. Patton is the difference between Faith No More and most rock acts. He sings with the soul of a black man, raps like he's just left Public Enemy and lights up the stage with a magnetic presence which is impossible to ignore. The voice soars and rises over the intense musical backdrop provided by Martin, drummer Mike Bordin, bassist Bill Gould and keyboardist Roddy 'It's my real name' Bottum, and when the band have summarily dismissed the silliness of 'Introduce Yourself' things really get cooking on 'Falling To Pieces'.
It's interesting to note how little material from the debut 'Introduce Yourself' album is aired. Only 'We Care A Lot', performed with steam roller-type power, really has any place in the arena of the modern day Faith No More. Why? Because it's very much Patton's ball game now. He made 'The Real Thing' the fabulous album that it is, and he's the ring master, the puppeteer of the live thing.
When he's not whirling around the stage, hair whipping everywhere in Blaze Bayley patented fashion, then he's commanding this ample audience with a cheeky grin and a wayward comment: "Who wants to come up on stage and show me how to do the Lambada?" No takers. "This is a sensitive song, so come on everyone, cry for me! CRY!" "This is a long show, so it's time to take a nap!" And then he snores into the mic.
This is Metal without its pompous, self-glorifying claptrap, without the humourless relentlessness shown by Mortal Sin. This is what I call Metalsoul Metal with true spirit and feeling. Faith No More's songs make you feel joyful. They lift, but unlike the Cross Your Heart bra, they don't separate. They bring people together with their glorious melange of styles. We got pretty much the whole of 'The Real Thing' to prove that point live, from the cool rock soul of 'Underwater Love' to the seriously loud and heavy rap/Metal fusion of new single 'Epic'.
And there's variety that goes beyond this, with Bordin, Patton, Bottum and Gould performing the cocktail Jazz of 'Edge Of The World' for first encore. This band are both brave and brilliant. This is the Real Thing! 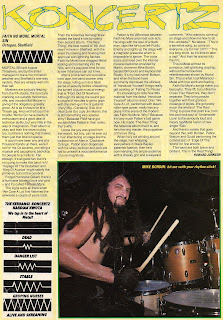