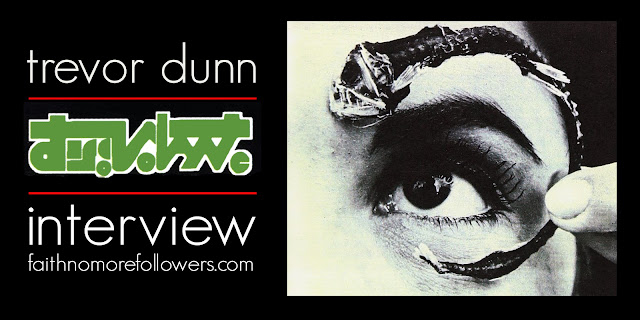 On the 21st anniversary of Disco Volante, Trevor Dunn talks to us about Mr. Bungle's second album.

After we celebrated the 25th anniversary of their debut album with exclusive interviews from members of the band we followed up our conversation with Trevor with a discussion about the second record 'Disco Volante'.


Mr. Bungle's approach to writing music radically changed from the debut record to Disco Volante. Why was this? This album seemed to be driven more by individuals than a team effort. Was this because you now all had more projects on the go?

I’m not sure I’d say our approach was different.  It’s true that instead of hanging out on campus where we were all going to school, by the early ‘90s we had relocated to San Francisco and were individually pursuing multiple music ventures.  I would say that after our first tour of ’92 we were completely done with that music and it took Danny, Trey and I a solid year to even get together in the same room with instruments.  Mike was constantly on the road.  Looking back I think that was a big learning period for all of us.  We were hungry for different music and culture and we used that time to research and absorb, individually finding things on our own as adults in “the big city”.  So once we started trying to figure out what our next musical move was we brought those new ideas to the table.  Ultimately our writing approach was the same, just more informed.   Also I think each of us was becoming more confident and secure as distinctive writers.  It was less about ‘let’s jam and create something’ and more about ‘here’s a concept; here’s what I have in mind’.  —not fully, but heading in that direction, which would solidify by the time we got to ‘California’.   I have often referred to DV as our “identity crisis” album.  I still remember Danny, Trey and I getting together the first time after the ’92 tour.  We sat there in our rehearsal studio with our instruments staring at each other with no idea what to do.


The 'Sleep trilogy' was completed on this album. Can you explain a the concept?

I didn’t know it was a trilogy until I wrote parts 2 & 3 and realized I had a running theme that originated with Slowly Growing Deaf.  In a nutshell, that song (with Phlegmatics & Carry Stress In The Jaw) explores corporeal reactions to outside forces; the gradual decline of the human body due to social interactions.  There is also the idea that while we sleep, our bodies recuperate and our minds deal with what has been imposed upon us.  The fruit of that processing is phlegm which accumulates until we wake up and expectorate.  I suppose it’s a sort of digestion on the mental level.   The song Phlegmatics is more about the internal struggle between lethargy and productivity whereas the other two reflect a bit on misanthropy.  The human body deteriorates on it’s own, of course, but as the poet has said, sleep is death’s brother.  It’s a fairly pedantic and existential concept to be honest, but also a very personal one.  “Slowly..” was inspired by the ironic need to wear earplugs while listening to music and also people’s inability to listen.  “Carry Stress…” was inspired by actual teeth-pulling anxiety nightmares and a serious case of bruxism.

Trey said in a recent interview that due to the success of the debut album Warner pretty much left you alone. How did they react to DV?

I seem to remember that they always left us alone. Patton was a big asset to them financially and in that regard it gave us some power because they had to appease him.  That, for one, meant giving him the freedom to work with us as he always had.  I don’t believe any of our records ever recouped which isn’t that big of a deal for a major label who have much larger fish to fry.  For them it is just another tax write-off.  And I have a sneaking suspicion that they possibly believed we would “grow up” musically some day and make them some money.  We never had much of a real relationship with the small group of people who were supposed to be our A&R folks.  Also, there was so much time between our albums that the staff had usually changed by the time we came around again.  I can’t say I really remember their reaction or cared one way or the other.  I do remember that getting the artwork as we wanted was a total pain in the ass and ultimately failed to a degree.  Musically, however, it was a blessing to be left alone.


Was any of the album improvised in the studio or did you have the whole thing carefully orchestrated?

The only moments of improv I can recall are some of the foley sounds on “Violenza..” and a few moments of “The Bends” as well as the breakdowns in “Carry Stress..” and “Merry Go Bye Bye”.  The whole record, including those moments, was certainly meticulously crafted starting with early demos and lots of rehearsals.  Once in the studio we had it in lock-out and basically lived there for close to two months.


You guys produced the album on your own was this simply because you couldn't find anyone to share your vision?

I remember driving my pick-up truck to Davis, CA with Zorn in the passenger seat on our way to a Masada gig (there was a short-lived West Coast quartet version with Kenny Wollesen, Ben Goldberg and myself).  On that trip I asked Zorn about producing DV.  I think Bungle had kicked around the idea of having him produce again but we were not 100% sure.  Zorn told me he felt that we didn’t need a producer and that we were capable of doing it on our own.  He was right.


In 1994 Trey joined and left FNM, did this situation have any effect on Patton and Trey's working relationship in Bungle?

I can’t really speak on that for various reasons. Suffice it to say rifts were established. The extent of the effect and on who is difficult to measure, but Mike & Trey continued to work together for sometime after that, as you know.


There is mystery surrounding 'Spy' or 'The Secret Song'. What is the story?

I suppose it will be good to put this in writing as I am often coerced into telling the story. Firstly, it was never called “Spy”.  That is a completely distinct song, “Spy” being the working title.  It was later named “Lemmy Caution” based on a character from the movie Alphaville.  As I mentioned, we basically lived in the recording studio . We would spend entire days and nights in there without seeing the sun.  In addition to this we tried to carry on with some of our normal lives.  I had some jazz gigs in town and one night I had to step out early to go to this gig.  Unbeknownst to me, while I was out the other guys arranged a song and recorded it.  Since I wasn’t there you’d have to ask them how that actually went down, but the song was compiled from our ‘graveyard of riffs’.  The graveyard consisted of countless riffs and orphaned phrases that never found a home.  Anyone could pilfer from the graveyard at anytime.  A few days later I was rummaging around the studio and came across a DAT tape where I discovered a rough mix of this song.  Busted.  Incidentally that is Bär on drums, Mike on bass and I believe Danny is playing keyboards although I’m not 100% sure.  The next level of secrecy was that Mike didn’t know I had discovered the tape.  He wasn’t around that day, but everyone else knew that I knew.  Later, we were in another studio and I decided to record the old man vocals which were for the most part improvised (as if that isn’t obvious).  The plan was to keep these vocals a secret from Mike until the record actually came out.  That would have been a very difficult task to uphold.   It didn’t work and Mike somehow heard the recording with my vocals.  However, the other guys didn’t know that he knew, so when the record came out he pretended to be pissed of about it, saying that the vocals ruined the song.  I was the only one who knew he wasn’t really angry.  We maintained the secrecy of the song by 1) not listing it on the CD (some people continue to think it’s called “Carry Stress In the Jaw”) and 2) hiding it in a hidden groove on the vinyl.  We also never played it live.


Do you have a favorite Mr. Bungle album?

Musically I am most proud of California however they each hold a distinct personality/history for me. Certainly they frame entire eras of my life.

Read More on the album HERE.