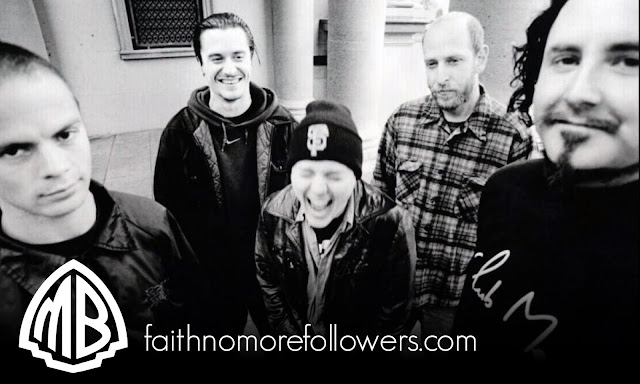 Madness, I tell you! Madness! That's what's going to happen when Mr Bungle turns up in Adelaide. They cover more ground in one song than most people do in a whole album - or career.

It's open season on every style of music they feel like messing with, so in that respect, they're our generation's Captain Beefheart or Mothers Of Invention - only even more depraved. I've talked to the band before and it was about as uncontrollable as you can imagine. As luck would have it, I drew Danny (drums) again. He's a very funny guy (we spent most of the time in this interview either slagging people off or laughing like children), as you'll see.

Deadpanning is his speciality, so you may be deceived by some of the answers. Rest assured, we were both laughing most of the interview through. Try to take him lightly, but remember he's sharp as a tack. After speaking to him again, I got the feeling he could do just about anything he put his mind to. When they get in town, say hello - just don't expect to get through Mike Patton (vox, also of Faith No More, of course), because he's usually inundated with new 'best friends'. Not that he minds much, but after the 1000th in line, he gets a little toey. The rest of them are't the same.

The first thing Danny says to me when he gets on the phone is: 'I don't wanna speak to Nazz. I wanna speak to (says my real name)." I start howling with laughter, wondering how the hell he knew. "I wanna talk to him man! Put him on, goddamn it!" How do you know him, I ask, playing along. This is turning out to be on a par with my first interview with them. "Me and (insert real name here) go way back. Is he there?" It's me, Danny! "Oh, you're him? Well who's Nazz?" me, I use a few names. "Wow." How did you remember? "We did an interview last year, ya wally. it's been on my mind ever since." Pull the other. I must admit it was pretty memorable. "Trevor (bass) was on that one, right?" Yeah, that's right. it was a little hard to transcribe though. You were answering in songs, if you remember rightly. "We were playing keyboards, right? lots of fun..."

So where are you now? On tour or something exciting like that?

"(Deadpans) I'm at my desk." Have you done anything to keep yourself busy?Anything at all? "Everybody's been doing their own band shows. Last time the Bungle were onstage together was in London at the end of our European tour in March. I think we've all been in the same room together once since then. It's not that we all hate each other - I think! I think there are a couple of people who hate each other, but mostly we have lots of things going on. All but one guy has other bands going." One in particular. One 'unspecified' member has more time restraints than the others; touring the world and all that.

"It's kinda unfortunate, but there - ptooo! I'll just spit out his name. You should see it drip down the wall! It's too bad because he's probably the most talented member of the band. He needs the money. I retract that. Everybody has to work to survive (sighs). It's two day jobs and a night job."

I've heard Mike's done a solo album. "Yeah, it's on this label called Tzadik." I heard it's a lot closer to Mr Bungle stuff. What's it like? "You mean, as opposed to Faith No More? Yeah! Let's just say Mr Bungle is pop record compared to Mike's solo record. Oh yeah. It's just him, just vocal stuff. He's not going (does a mean imitation of a wank fest) 'oh oh oh'. It's him creating lots of sounds for voice. Only four track recordings but I'll just say it's a challenge to listen to in one sitting. It's a really great Cd for five CD random play - it's great for that. It'd be great to use for transitions on home made tapes. i could imagine someone slipping one of his songs whatever and really freaking the hell outta someone. HA HA! You gotta hear it man. F.R.E.A.K.Y."

What is it you do outside of Mr Bungle?
"I'm in another band which will hopefully make it out to Australia one day. Hopefully, it's a pop band in comparison to Mr Bungle. No! Not pop. Ugh! it has nothing to do with Mr Bungle, I'll just say that. When I say pop, I end up meaning simple. I'm also managing the band, which sucks."

Do you think Mr Bungle will 'pop out' new material?
"We've been thinking about another album for a coupla years. We were thinking about the next album when we recorded the previous one. We knew everything wouldn't fit on the last one. When it comes time to record the next album, we might not even USE any of this new stuff. I have a theory that there is this graveyard of riffs, which is now actually becoming a graveyard of songs that never really had a home on a record. Maybe when we get to 40 years old we can bring out these records of (turns on the cheesy American game show host voice) 'Lost Tracks!' " Ooh! That was a triple cheeseburger! "We're gonna have an abundance of that shit." say it ain't so, Joe! there's people out there who'd love to get a copy of anything you've got. Don't let em sink without a trace, man. We have a brief talk about Prince/Love Symbol/Davo/The Caped Purple Crusader and his 'vault' material. Danny hadn't heard of his 'slave tattoo phase'.

"I don't really talk to him that much anymore. We're not as close as we use to be, so I'm not all that sure what he's up to anymore. He's a good kid. Got a good head on his shoulders." Shit stirrer. "Nah, he wanted to play baseball, but he didn't have the arm for it, so he ended up playing rock n'roll. He had a great slider, he just couldn't throw the heater. He had a lot of problems with his control, location, stuff like that. Plus he couldn't swing a bat for shit. He had the talent, he just didn't like wearing cleats. What can you do?"

So what's everyone else doing?
"Theo's (various wind instruments) doing some pretty insane computer work." You mean real life stuff? "Yeah! I went to visit him the other day. he was piecing together a band photo on his computer cos we don't really have any. I caught him at work. I turned up at midnight and thought he'd be the only guy there and he'd be workin' in some dumb little basement office. I go there and there and there's three security guards in this totally nice building, y'know San Francisco...They're like 'Who 're you here to see?' Uh, Theo. 'Theo M? Just sign in here'. They go ring him and I go up and he's on the third floor; you walk down a real serious building! He has his own office. I walked past the 10 people who work under him and he's got some six million dollar computer he;s working on...He's got this total secret life, real-job man!

Bär's working three jobs and probably earning more money than anybody. Trevor's making a living by playing jazz in 10 bands - he does a LOT of music. Trey spruance (guitar) is working on two different bands. Presently he's working on some Christmas record he's got to do for Japan. Christmas in Japan!"

Sounds ghastly. Mr Bungle are in town. They've heard about our State's homegrown reputation and hope we don't have them deported too early in the tour. He, he, he.
Labels: 199 Disco Volante Mr Bungle Trevor Dunn