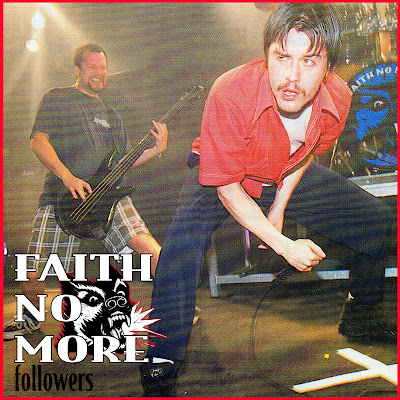 BILL GOULD of FAITH NO MORE HYPNOTIC LOOPS AND POWER CHORDS
Raw and uncompromising. Faith No More patrol the margins of mainstream rock. David Katz gets to the heart of the matter.


One of the most successful groups to come out of San Francisco since the demise of 'flower power' culture, FNM were originally active on the experimental circuit that emerged in the early 1980s in the aftermath of the punk and radical jazz explosions. Billy Gould has been bassist with the band since its still-born preconception as Faith No Man, as have drummer Mike Bordin and keyboardist Roddy Bottum. Although the group's three founding members have ensured that their sound has retained similar elements, their own musical differences have always resulted in a divergent sound. Roddy Bottom favours pop melodies and gothic chords, while Bordin's pounding drum rolls recall childhood idols Black Sabbath. Gould, meanwhile, started out by imitating, "the guy in Cameo, Jah Wobble, Lemmy, and Magazine's Barry Adamson". Their preponderance of guitarists and array of short-lived vocalists have often steered their sound further into fractured and alien territory, as has their baffling choice of cover tunes by the likes of Lionel Ritchie, Burt Bacharach and Sparks...

In the early days, Gould reveals, the group weren't really bothered about who fulfilled their vocal duties. They first settled for an oddball from New Jersey called Joe Pie; leader of a sardonic parody band called the Pop-0-Pies, he was fond of endless jams based on the Grateful Dead's Truckin'. At one point, Faith No More became the Pop-0-Pies' backing band, and Joe Pie in turn became their mouthpiece. "When we started playing, we just wanted a guy with a big mouth," laughed the stocky bassist. "We didn't care if he could sing or not because we were playing repetitive loops."
And what inspired this method of playing? "Dope and reggae actually," he replies flashing a true stoner's grin. "It's just something that almost becomes hypnotic. If you lay down a groove that's totally repetitive, and you start day dreaming and drifting off, then whatever that person is saying gets right into your brain. It's kind of a crude hypnotism type thing."
After Joe Pie was dismissed from the band, a greenhorn chanteuse called Courtney Love sang for them for a while, but she too was given the boot, later gaining infamy as wife of Nirvana's Kurt Cobain and as leader of her own band. Hole. Although rumour stated that she was removed from Faith No More because of drug habits and ego problems, Gould quickly sets the record straight concerning her departure. "Nah, she couldn't sing with us," he confesses. "It didn't work, it sounded horrible together. If you hear tapes or see video tapes, it's not a pretty sight, not a pretty listen." Even so, Gould agreed that she had a strong presence on stage. "She could be good live, she's a hell of a performer," he relents. "That's what I liked about her, she had a good way of grabbing people's attention. We wanted her to be in the group, but musically it really just wasn't happening."
Their debut album. We Care A Lot, was voiced by Chuck Mosley, a mixed-race youth from Los Angeles who brought rap and funk elements to the FNM sound, but the group became somewhat fixated on rock around the time of Mosley's dismissal. "Rock was like a flirtation," reflects Billy, "kind of a weird exercise in bad taste in a lot of ways, the last thing we would do normally, which is why we made ourselves do it. (Big) Jim (Martin), our (former) guitar player used to say this about other things, "You think it's really funny now, but if you do it long enough, it's going to start becoming what you are all about. In a way, that is what happened to us, eventually we became a rock band."

Throughout the group's many phases, Gould I has punctuated their music with strong power chords and bass lines that are simple and loud. "I still do very simple one note things," he admits, "I play off the kick drum a lot." Mike Patton, who replaced Mosley as lead singer several years ago, has given their sound a more melodic emphasis through his own musical arrangements, including bass lines that have been markedly different from the ones Gould creates. "He thinks in a way that I wouldn't — it's actually good for me because I would never have done what I end up doing. When you move your fingers in a way that you wouldn't normally, and you get used to it and it becomes natural, then you have a whole new way of going about things. For example, the song 'Get Out,' on our last record, he did the bass part and I'm thinking, 'What the hell is that? What notes is he playing? Why would anybody want to even think of that?' I learned it and realised it was actually really simple, just a different way of looking at playing the instrument. I've got 20 years of indoctrination in me, it's sometimes hard to see past my own way of thinking."
On their last couple of albums, Gould says, he's been trying a different approach. "I'm trying to get a little more into becoming invisible. The past few years I've been getting into the song writing, and getting out of shoving things down people's throats, getting more into being in the right place at the right time. If you don't notice I'm there it sometimes means I did my job even better. That's been my mentality lately."

To help him on his mission, Gould now uses a Zon Sonus; "It's a really bitchin' bass," he raves, "it's got a graphite neck which doesn't warp. When you travel its really good, because whether it's freezing or hot outside, it doesn't change. You set your bridge the way you like it, and it's always that way. My old bass was an Aria Integra. Really nice, but it was made out of basswood, and that stuff warps a lot, it changes with the weather. It was a rare night when I would have it exactly the way that it felt comfortable. In the early days, Gould used a Gibson Grabber with a sliding pickup, but throughout his entire career, he has always stuck to Peavey amps. "There was a sound that those amps had that became part of my sound, and now pretty much Peavey is the only amp that will grunt the way that I need it to," he explains. "I couldn't play these songs on most other amps, they'd sound like shit. Most people really laugh, Peavey is really thought of like a bargain basement kind of brand, but to me it's got the best tone of any amp that I can think of."
Like the other members of the group, Gould has worked on solo projects away from Faith No More. 'I've been producing," he says proudly. "A band called Naive in Russia, and a band called Machina in Mexico City. Machina is more like a speed metal band, but it was really an interesting experience, because their studio was pretty crude. It actually ended up sounding OK, and it shouldn't have. Everything was noisy, I was surprised that it ended up sounding like a record!"

To Russia with love

'That Russian production gig was just a trip in itself," Billy continues. "That took about six weeks to do, it was brutal! It was done in February in a very interesting studio near Moscow, way out of town. The hours that we had were five in the evening 'til five in the morning, the buses start running at 5:30, so we'd start drinking vodka and we'd get in every morning and the sun was coming up. I did that for about five weeks and it got kinda surreal."
As a working unit. Faith No More seem quite content. They retain a solid professionalism without being over-polished or predictable. When I asked Gould how he thought fame had affected his life, he had to think for a moment before giving this perplexing response. "Coming home after a tour, probably my life isn't that much different than if the band never took off, except I go out for dinner a little more often. I think being in a band that is successful is like having a higher limit on your credit card. You get a little buying power, but you get locked into the system a lot more as well, and the things that can come easy at first actually have tentacles that try to keep you in. The longer you're in and the better you do, the more indebted you are to the system that's slowly suffocating you."
Hopefully Billy and Faith No More will continue to fight against the very system they're part of. It's what they do best.
Labels: #KFAD21 1995 Bassist Bill Gould Faith no more King For A Day Fool For A Lifetime