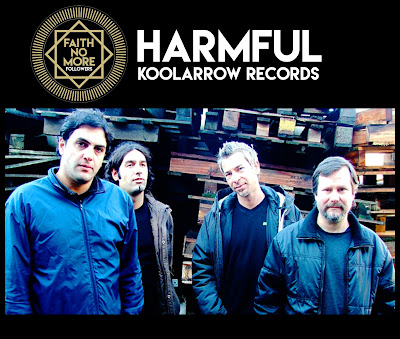 During Faith No More's eleven years apart each member stayed busy. The many musical endeavours of Mike Patton are well documented, and Mike Bordin was of course smashing out drums in stadiums with Ozzy.


Bill Gould however concentrated on Koolarrow Records, producing some amazing bands who for the main part were in the 'non-English' speaking category.


"Well, I think every country in the world probably has at least a couple cool bands. There's this prevailing mentality that things coming from the States or UK are somewhat "better" and I don't subscribe to that. The sad fact is that there is good music everywhere. And yes, sometimes a band from a place like Denmark will be more interesting, because it's a small country and the reasons for making records might not have anything to do with getting rich and/or famous."

One signing Bill made in 2007 was the German trio Harmful.

A German metal band that came together in 1992, Harmful incorporated the syncopated stylings of early nineties metal acts with more traditional elements of the genre, including elements of band such as Black Sabbath. Members Aren Emirze (vocals and guitar), Chris Aidonopoulos (bass), and Nico Heimann (drums) released their first album, Harmful, on BluNoise in 1995. It was followed by another independent release, Apoplexy 136 (also on BluNoise), in 1997, before the band signed what would become a two album deal with major label BMG. With the heavy hitters in place, Harmful released Counterbalance in 2000 and Wromantic in 2001. After splitting with the label in 2002, the band toured extensively, before releasing Sanguine on Steamhammer/SPV in 2003. Sis Masis followed in 2005, and in 2007 former Faith No More bassist Billy Gould stepped into the fray to produce their seventh album, 7. The working relationship went well enough with Gould that he joined the band full time for touring as second guitarist. Their latest effort, Cause, was released in 2010. – Chris True

It seems for now Harmful are no more as the band played a 'Farewell tour' in 2014.

"I might not have been in the spotlight but I've been working my fucking ass off. Oddly enough, I was working far too much with my label [Kool Arrow Records] when I got this call from Harmful to produce their record but I didn't really want to take on another project as I was pretty burned out. I went over to their website, heard their music and really liked it. We started talking and found we had a lot in common. It's interesting and unusual for people with such different experiences to still have the same outlook on things."


"Originally, I decided to produce the band because I liked the music. Once we began working together, I realized that we had a lot in common, musically speaking. I think I can actually make a positive contribution here. What excites me about the band is the fact that it is straight-up with no pretence, while managing at the same time to throw in some beautifully twisted chord progressions. I haven't done anything like this for almost 10 years, so this will be an adventure for me too, and isn't that what it's supposed to be about? Besides, this is a great band, and if my involvement helps them to expand beyond Germany, then it's totally worth the effort."

After working the band Bill and Harmful forged a great working relationship and Bill joined the band as a second guitarist to promote the band on tour.


"I'm scared to death, and trying to train because it's going to be hard and something I've not done for a long time. With Faith No More I was lucky that we achieved a certain amount of success but if you look at the band's history, we were together for 17 years, and 10 of those years was spend driving about in a horrible little van playing small venues. To tell the truth that is my experience, more than anything else. Playing big gigs if you're not inspired and not into it can be a lot harder than playing a small venue and having a lot of fun. I'm just trying to keep my own intentions as pure as possible. If I wasn't into it, I wouldn't be doing it, the money's no good, touring in a van is really hard work, there's no sleep and horrible food."

There were two videos released from the album 'Elaine' and 'Tension', directed by Espen Jorgensen. Shot in Feb/March of 2007 they were released on Aug the 26th (Elaine) and Nov (Tension).


"I am a big fan of Espen Jorgensen; he is extremely focused in whatever he does, and I knew that it would be a productive collaboration from the start. But I had no idea as to the depths of his depravity until he brought out the mannequin."

"Bill and I have known each other for quite some time, and we've actually tried to do stuff together, but it has never worked out, so I'm very happy that I was able to shoot the video for Bill and the HARMFUL guys. To me it was a creative break in the making of 'The Sequential Art', and since I like to do things the complicated way, I did two versions of the video. I feel in love with 'Elaine' (the song) — it's very diverse, and I think that reflects in the video. Most of the videos out there are so shallow, I wanted to do something different, and risk falling on my ass to get there, and I think I did OK — well, so I'm told."