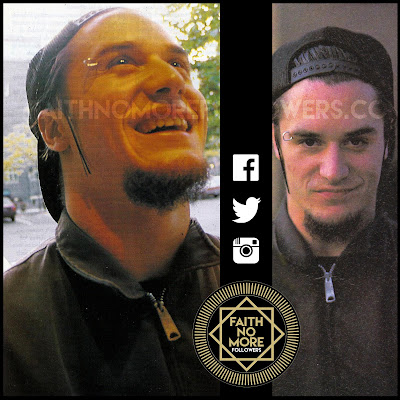 It's a balmy midsummer's afternoon in Newcastle, and the members of Faith No More are holed up on the outskirts of this British borough for the next several days in a modestly accommodating holiday Inn, The San  Francisco based quintet is currently on a bonafide head banger bonanza world tour opening for Metallica and Guns n' Roses, which allows them as many as four days 'off' from performing per week. And today, well,  it just happens to be one of those 'off' days.

While Mike Patton's band mates—drummer Mike Bordin, keyboardist Roddy Bottum, bassist Billy Gould and guitarist Jim Martin—are scattered around town doing a variety of touristy things, the singer is confined to his hotel room, the designated caretaker of band business. On this particular day, that business primarily consists of interviews with music journalists, which occasionally get interrupted by the telephone.

"We're trying to choose our next video director, and we have five of them calling," laughs Patton as he puts down the receiver. "The one who says fuck the most is in."
Stranded in far too sedate a city that reminds him far too much of  American cities like Lancaster,Pennsylvania, Mike Patton is undeniably bored.
"Guns n' Roses takes too many days off," he gripes. Nevertheless, he is in a relatively good spirits. And well he should be, considering FMM's latest album. Angel Dust, debated at number Ten on Billboard's album chart. And much like the band's surprise 1990 Top five hit single, 'Epic', which catapulted this hard-core/metal/thrash/funk band from the drudges of life as just another underground band to MTV darlings, its new single, 'Midlife Crisis', has been added to everything from alternative to metal to AOR radio station playlists.
Much of the credit for FNM's entrance into the big leagues has been bestowed upon its flamboyant singer, whose penchant for creating twisted characters juxtaposed  against surreal Images in his lyrics Is only surpassed by his uncanny ability to become those characters during live performances. Interestingly, the Mike Patton who presently stares out the hotel window Is a far cry from the characters that he extracts from his maniacal imagination. He's witty, soft-spoken, occasionally underhandedly sarcastic and far more intelligent  than he would probably like you to believe.

"Nothing is going on here," continues Patton. "The most exciting thing is we met the Beastie Boys in the lobby and we're going to go out and eat Indian food with them."
Of course, If the Indian food doesn't  cure Patton's doldrums, there's always his favourite boredom-alleviating pastime.
"I like to shit in different places," he explains. "I've really gotten into the placement of human shit. If you're in a new city, there's always a new place!"

Durlng the early 80s, while bassist Gould  was still a philosophy student at Berkeley, Bordln was In the midst of a course in African drumming and keyboardist Bottum was attending the University of San Francisco, the student/friend trio got this crazy notion in their collective noggin that they wanted to form a band.
And so, abandoning their scholastic endeavours, they began jamming together. Soon thereafter, they hooked up with guitarist Martin and his vocalist buddy, Chuck Mosley, both from Haywood, California.
By 1985, FNM had solidified as a unit and built a substantial following In the San Francisco Bay Area. They entered a home eight-track studio in Oakland owned by producer Matt Wallace  and recorded 'We Care A Lot'. After a nationwide tour, FNM caught the attention of Slash Records, who subsequently released 'Introduce Yourself' in  1987. But even with an opening slot on a Red Hot Chill Peppers tour and later. a successful European tour on their own, the album went nowhere.
After taking a long, sobering look at the band's weaknesses, members Bordln, Martin, Gould and Bottum decided that vocalist Mosley just wasn't cutting it.
But it wasn't until January of 1989 that the old proverbial pendulum began to swing the other way for the FNM clan when they happened upon singer Mike Patton, who, at the time, fronted a circus-inspired, art-rock band from Eureka, California known as Mr. Bungle.

"We didn't have a whole hell of a lot going," says Patton regarding Mr. Bungle. "We were from a small town where everything just kind of stands still, everybody drinks coffee and nobody does anything. We were in college, and being in a band was kind of something that we could do to stay active and not turn Into fucking tree fungus."
After chasing a recording contract for four years, Patton seriously  entertained FNM's offer to join the band as its new singer.
"At that point," recalls Patton, "I hadn't done anything outside of working, going to school and pretending, and I thought, well, I might as well try and do something. And more than anything else, I wanted to go on the road because I had this idea in my head that it would be a pretty surreal thing."
But before Patton could get on the road, he had to write the lyrics for FNM's pending album, 'The Real Thing'. And he had a whopping two weeks to do it!
"I came in when they were mostly finished," says Patton. "I rehearsed with them a lot and just got a feel for the songs. For me, coming into a situation like that—where the songs were very linear and had a pattern—was new to me. I didn't know how to write songs. none of my friends knew how to write songs. But these guys did! Consequently, it was a challenge for me to write lyrics that could follow a pattern like that—verse/chorus. It was new and exciting and it was like, wow, I've got to try this!"

After the release of 'The Real Thing', it took FNM another gruelling year to attain any significant commercial success. The album was eventually certified platinum, reaching number Eleven on the Billboard pop album chart. It also produced a gold single  (Epic), which received a Grammy nomination for Best Metal Performance.
Even though Patton had now become comfortable as FNM's eccentric mouthpiece, he had never given up the Idea that his 'other band', Mr.Bungle, could also achieve some sort of stardom. So early In 1991, he took Mr. Bungle out on an industry showcase tour, which resulted In the band attaining a record contract with (you guessed It) FNM's label, Warner Bros. Mr. Bungle's self-titled album was released late in 1991 and was followed by a nationwide tour.
Interestingly, with the signing of Mr. Bungle came plenty of industry speculation as to the 'real' reason why Warner Bros signed the band in the first  place. Was it simply to appease Patton or did they genuinely feel the band was commercially viable?
While the reason behind the signing was never divulged, it was pretty obvious that more than a few WB execs contemplated the negative effects that this one-singer-two-bands situation would have on FNM's  longevity. Over-exposure, over-extension, jealous band members wanting more commitment and conflicting schedules being only the tip of the Iceberg!

Patton comments,
"I think that the music industry makes people think that a band's got to be—especially with men—like a very male bonding type of locker room thing, and anything outside of that Is adulterous. And maybe from a business point of view, it isn't the smartest thing. I mean, my record company hated me for doing it; everybody was very nervous. I think they thought that I was putting everything that I worked for and stood for in Jeopardy. To me, that's kind of a twisted view. It's very dollars and cents logic. But I guess they had a right to be protective."
But over the course of the next several months, everything seemed to work Itself out.
"The Mr. Bungle tour went great," says Patton. "People came. They may have hated it, but they came."

As has become tradition with FNM, when the guys entered the studio to record Angel Dust, early in 1992, they faithfully chose San Francisco as the creative site, and once again, they placed Matt Wallace at the production helm. Of course, there were plenty of differences between the recording of this and their last LPs. One significant difference being Patton's involvement in the entire recording process from the get-go, and more importantly, his contributions to the new material, especially in the initial writing stages.

"We kind of all lived with the ideas—the genesis of the songs," explains Patton. "So it was a lot easier for us to see where each song was going.
For example, sometimes we'd think of a visual image for a song beforehand. Like we'd see, say, a crack dealer with a Hitler moustache wearing a Superman cap, running through an alley shooting policemen. (The results of this exercise became the song 'Crack Hitler') You'd kind of come up with a musical Interpretation of the visual Image. That's kind of the way the band writes songs sometimes."
Although they set aside a two-month recording period, FNM spent less than two weeks in the studio laying down the tracks for 'Angel Dust'. The rest of that time was wasted, according to Patton, "fighting and breaking things." Apparently, most of this fighting resulted from lack of communication between guitarist Martin and the other members.
"The only real struggle that we had was with the guitar parts," comments Patton. "We sort of panicked because Jim wasn't really understanding some of the things that we were doing, so we did them ourselves. Some of the guitar parts, our bass player Bill played."
But once the three A's (anxiety, apprehension and anticipation) that usually accompany the recording process were lifted, things seemed to return to some sort of normalcy between the band mates. Presently, there doesn't appear to be any immediate danger of FNM self-destructing.
"Nothing is too bad," admits Patton. "We're the kind of the people who could commit a crime against another member's mother, and we'd still be able to go onstage five minutes later and play a good show."
Of course, this must be because the music is so important, right?
"No," answers Patton, dryly. "It's  because we've become really good at it."

Reportedly, FNM spent more than twice as much money recording 'Angel Dust' than they did on 'The Real Thing'. Yet, Patton stresses that things like generous advances or larger recording budgets didn't put pressure on the band to come up with a more commercially viable disc. "Figures can't really put pressure on you the way a person can," states Patton, "and that didn't come until later. We Just wanted to make a good record. And more than anything, we knew we didn't want to make It anything like the last one. Of course, It's still going to sound like us. But there's nothing worse than seeing someone hit themselves in the same place, and just  keep repeating themselves over and over. We were all really afraid of that. Once we finished the recording, we finally let our record company hear it. We denied them access to the studio the whole time that we were recordIng, and we finally let them in at the end. And naturally, they panicked."
Warner Bros—the largest record company on the universe— panicked?
"Yeah," laughs Patton. "They realised they may have to find a new angle to exploit. They realized they'd have to work again. You see, once you make it to a certain level In the music business, its all about making it to the next plateau. And I think, of course, people want to make their Jobs easier, and If they can use the same tactic to get It to the next level, they would probably sleep a lot easier at night. It was our duty to not let them sleep at night! And when I saw them panicking, I knew we'd made a good record." 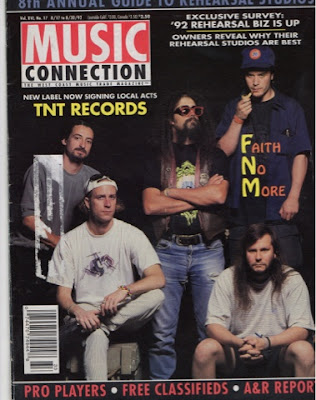