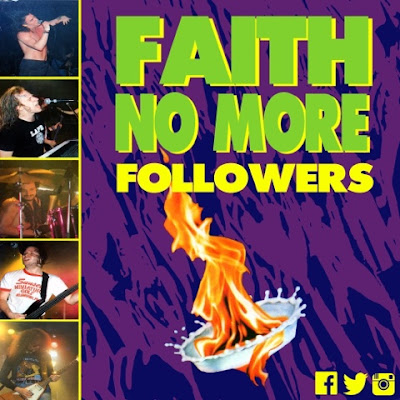 On this day 25 years ago Faith No More released their only official live show on video.

'You Fat Bastards: Live At Brixton Academy' was recorded at the London venue by William Shapland on April 28th 1990, and directed by John Booth.

With the recent releases of FNM live at the Filmore in May earlier this year, dare we hope for another official full length show? In the meantime to celebrate the 25th anniversary of the release of this fantastic and historic show here are a collection of reviews from our archives. ( Reviews of the video release, not the show itself ) 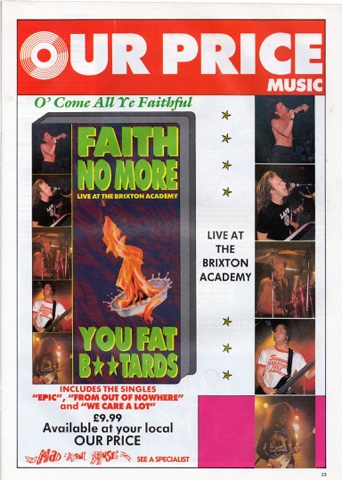 Living Off The Fat of The Land

NONE OF Faith No More, in their own little ways, are dealing with a full deck. A straight gig video couldn't hope to reveal that fact, save for singer Mike Patton's facial expressions but it does capture adequately the collective madness in their music.
Recorded at Brixton Academy in April, You Fat Bastards - a term of ender from crowd to band - is a warts an all  (as in no overdubs) representation of Faith No More with all the dirt, grit and grind that entails.
The sound is as hard and cruel as Faith No More get, the camera work is bereft of any arty pretension and right in your face, although the bias towards Patton is a little unhealthy.
The only criticism, which to it's credit doesn't detract from the video's capacity to entertain, is that this isn't the full gig and the best moments from the 'Introduce Yourself' LP have been omitted; no title track, no 'Chinese Arithmetic', just the crowd-pleasing killer disco of 'We Care A Lot'.
But there is an added bonus with the inclusion of the thunderous As The Worm Turns' from the first LP - Patton sporting a gruesome skull mask - and Faith No More total live mayhemic experience is caught on film superbly during 'The Real Thing', 'Zombie Eaters' and the opening 'From Out Of Nowhere'. 'You Fat Bastards' is cohesive, alive and works well as a concert video, for the uninitiated or otherwise just make sure you watch it with the volume  approaching your pain threshold.

AT LAST, in glorious colour, all the savage sensuality of a Faith No More gig! If you were at this London show, you can now happily relive it at your leisure, try to spot yourself in the crowd and pick out the bum notes. If you missed it, you can see what all the fuss was about. Either way It's a bit of a sparkler, avoiding the usual drab trap of vids such as these.
Watching a gig from your living room can be unbearably dull, but Faith No More's goofy, sassy, downright sexy performance translates wonderfully well whether you're leaping from the stacks or vegetating on the sofa. Few bands are as visually addictive as FNM. Vocalist Mike Patton bounces, stomps, strides and contorts, a beautiful bag of ferocious energy working overtime and never tiring. Metal monster Jim Martin looks suitably eccentric lurking with sinister motion, like a throwback from 70s electric hippiedom, complete with Flying V and ridiculous spectacles. At the back, the dreadlocked Mike Bordin smashes a funky rhythm so tight it hurts, while Bill Gould pumps bass and Roddy Bottum sweats over his keyboards. Each has a presence peculiar to themselves, unity never having been a feature of this band, which results in an effective drama of conflict and contrast.


From the juicy punch of 'We Care A Lot', the scowling intensity of 'Edge Of The World' and the earnest kick of 'Falling To Pieces', to the ambitious chant of 'Epic' and the hypnotic rendition of Sabbath's 'War Pigs', FNM tease your brain. jump on your toes and make your flesh itch. Their ingenious mix of heavy Funk and Metal is truly dangerous. Mike Patton's props (a policeman's hat and a skull mask to name a couple) and expressions lend mischief, cheek and humour, the outcome is utterly infectious. Whether it's a first or a flashback, You Fat Bastards is an hour of pure entertainment. Fast, fun, fierce and furious.

Labels: 1990 Faith no more Live At Brixton The Real Thing You Fat Bastards