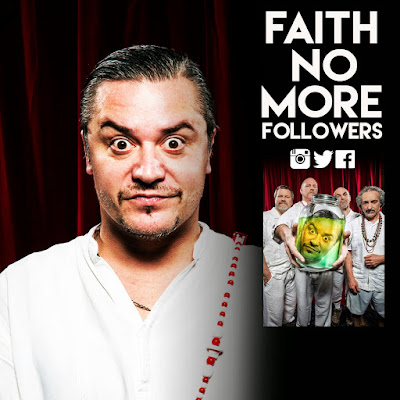 We are only a week into August and already there are a bunch of interviews to share with you.

Here they are with a sections of the text, follow the links for full interviews.

And as part of the live , how Sol Invictus songs with his classic material mix?

The Truth is that the new songs were coupled well with the others. They work very well together. Music is different from our old stuff , but somehow everything perfectly mated , and feels very natural. In our new shows we are all at least four to seven songs from the new album , so we're playing a lot of this material , which I think is very good.And in Chile Faith No More is one of the most beloved bands ...Absolutely . And we also feel that way . So , boys, we'll see again and as always , we are very excited about this new tour and will be a great fucking show. So is that let's go!

A short interview with Bill and Roddy Bottum by New York webpage.

Faith No More rocking out to 'Sol' music
By Carl Gibson

Bottum: This record feels more cohesive and thematic than anything we've done before. I feel all the songs sort of work together in a way that the other records didn't.Gould: Right now we play better that we ever did and it's kind of like a tight fist right now, a super tight fist. It's really good. It's really solid and we've been very consistent.

An Interview with Faith No More: Digging Deep
By Robert Gluck

What can fans expect for this coming U.S. tour?

Well we take a whole lot of pride in our live shows. That will never change. There is always going to be a lot of energy and passion on the stage. And you can’t forget a little humor as well (laughs). You gotta keep the mood light and everybody relaxed. As far as the setlist goes, you can expect a lot of older songs. Of course, we will also sprinkle in a number of new tracks from Sol Invictus.

We love to travel. We are all pretty adventurous and would love perform in so many different places. Iceland, India, and Vietnam are just a few that come to mind immediately.

Do you have any plans after the U.S. tour concludes?

Once the tour concludes, we will rest up and get ready to head on over to South America!

“I think it’s amazing. I guess we’ve played some hard, driving music, but I never thought of us as a heavy metal band. But this year we’ve played a bunch of heavy metal festivals, and they all really went over really well. And I do think of that as an achievement. Because that’s not our identity, necessarily, but I’m glad that we can attract different people, and they can appreciate us for what we really are.

"There’s little kids, old grey-haired people, there’s metalheads — all kinds, everybody. To the point where I can’t even say what a Faith No More fan is. Last night, just looking in the audience, I’m like: ‘This is really a strange mix of people.’ I try not to judge them; I’m just really happy they like what I’m doing.”

Faith No More - Mastering with the Master Buss Processor

Can you please tell us a little bit about how you got involved in this record?

I have known Billy Gould (bassist, producer and engineer of Faith No More) for some years now. We like to talk about gear and music, and he asked me if I would be interested in trying out mastering the first single he had produced, engineered and mixed for a limited edition 7” vinyl called “Mother****er”. A few months later, I had mastered the second limited edition 7” vinyl “Superhero”, which he produced and engineered as well, but had mixed in collaboration with Matt Wallace. It featured a B-Side remix by Alex Hacke of Einstürzende Neubauten.Around February I got to master the whole “Sol Invictus” album, which was produced and engineered by Billy Gould and mixed by Gould and Matt Wallace. The two singles were remixed again by Gould and Wallace and I remastered them differently for the album, in order to fit with the other songs. The whole process was a natural progression from mastering the first singles and remixes to the whole album. Collaborating with both Gould and Wallace was very inspiring – both are very nice, down-to-earth, super talented people. I feel very blessed to be the mastering engineer on this album.

Matt Wallace gives a great insight into the early days of working with FNM.

"The guys in Faith No More are great to work with. That's not saying that we haven't had our moments of, ahem, 'creative fiction' but, generally, we get along very well. In fact, they are the only band that I have shared lodging with! While recording their Independent record on Mordam Records all five guys and I slept on a loft across the parking tot from the studio where we recorded the 'We Care A Lot' album. So, we worked together all day tong and then, voila!, we walked 15 steps to our lodging  and spent even more time together! ha ha. During the making of their debut album on Slash Records entitled 'Introduce Yourself' Mike Bordin, Jim Martin and I all shared a room at the infamous Tropicana Hotel on Santa Monica Boulevard. It was a sketchy hotel in a sketchy part of West Los Angeles but It was still an enjoyable experience. Suffice to say that, between throwing lawn furniture Into the pool (which the management had us remove) and shutting off the electricity to the hotel we managed  to make a fine record!
By the way. Bill Gould (bass player) and Mike Bordin (drummer) actually started their recording history in my parents' suburban garage in Lafayette, California. It was there that we recorded their first demos for the earliest incarnation of Faith No More entitled 'Sharp Young Men' they then became 'Faith No Man' and they even released a 7" single from those sessions! Pretty sweet."

Bill talks to Jason Rockman of the band Slaves On Dope.