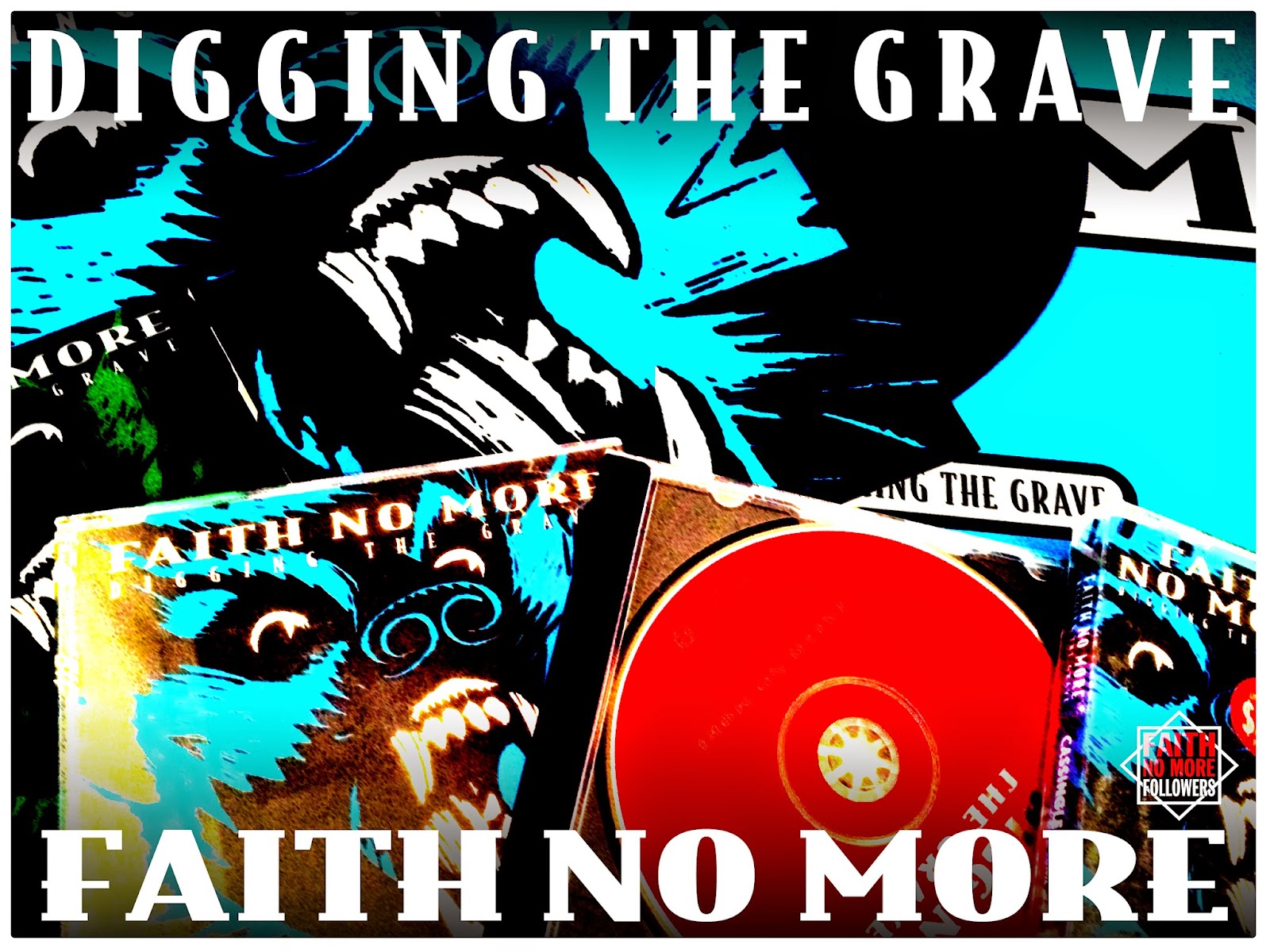 All FAITH NO MORE fans are waiting with excited anticipation for the arrival of album number 7, SOL INVICTUS.


But we have been here before a few times now. Twenty years ago we were awaiting the arrival of 'King For A Day Fool For A Lifetime' and several nervous questions were pulsating around our brain area. How will it measure up against it's masterpiece predecessor 'Angel Dust' ? How will it work out without the grinding axe work of long-time member Jim Martin? How will it sound without Matt Wallace behind the mixing desk? But most importantly how long do I have to wait! 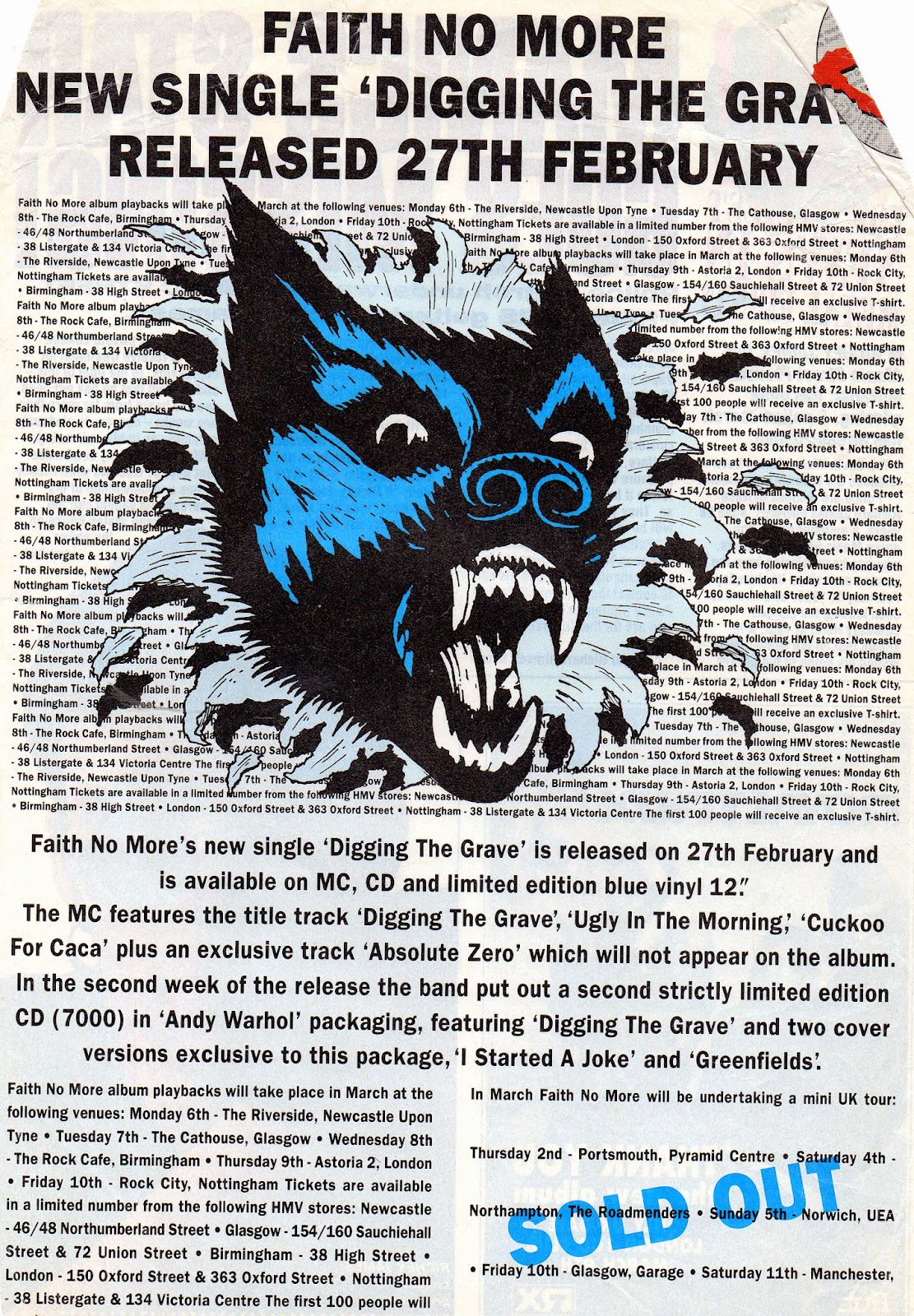 On February 28th 1995 the very first single release ahead of the album 'DIGGING THE GRAVE' the hit record stores at 9am, and shortly after that the CD players of those sceptic questioners. Almost three years in waiting for new FNM material, yeah it's true we were blessed with 'Another Body Murdered' but this single was the appetiser to a whole new full meal of an album complete with mysterious guitars, new haircuts and a sense of refreshed attitude.

Ok first impressions: where the hell are Roddy Bottum's keys? Is this really Trey Spruance from MR BUNGLE on guitar? Have FNM finally given up trying not to be a rock band? Then........Damn this song is raw and it's hard, three minutes of ear-bashing, jump around the room brutality.....this is pretty awesome.

In true FNM style it's different, unexpected and spectacular. It keeps up the fashion of FNM's ability to progress their sound further with every debut single from each album. If you compare this song to 'From Out Of Nowhere' or 'Midlife Crisis', though the characteristic FNM elements are present the songs are so diverse it's like listening to a different band.

To say the had band lost their most 'metal' contributor (Big Jim) the song is bursting with brutal guitar riffs from the eccentric hand of Spruance. A whole circus tour away from Mr Bungle yet it carves his short-lived smile on the face of FNM deep. We might at first think he was trying too hard to 'fit into' the band but we we're proved wrong by the following album.
Mike Patton's vocals are nothing but perfection. He still has the schizophrenic shifts between ferocious growling and powerful operatic that we are used to from 'Angel Dust', but he is angrier, more lunatic than ever. The noises that man can produce are astounding, like a human guitar on overdrive he screams the living shit out of the middle eight. His harmonies on the chorus are also tighter than anything before.
Only the rhythm section is truly reminiscent of the 'Angel Dust' sound with Bill Gould feverishly pounding on his strings and we can only imagine how many cymbals, drum skins and sticks Mike Bordin went though to create that untamed monster beat.
"On that track I wanted to get that sound we had on our first records but tighter, faster and harder. The middle section of that track came from the beat me and Bill came up with before we started trying out guitarists." - Mike Bordin 1995 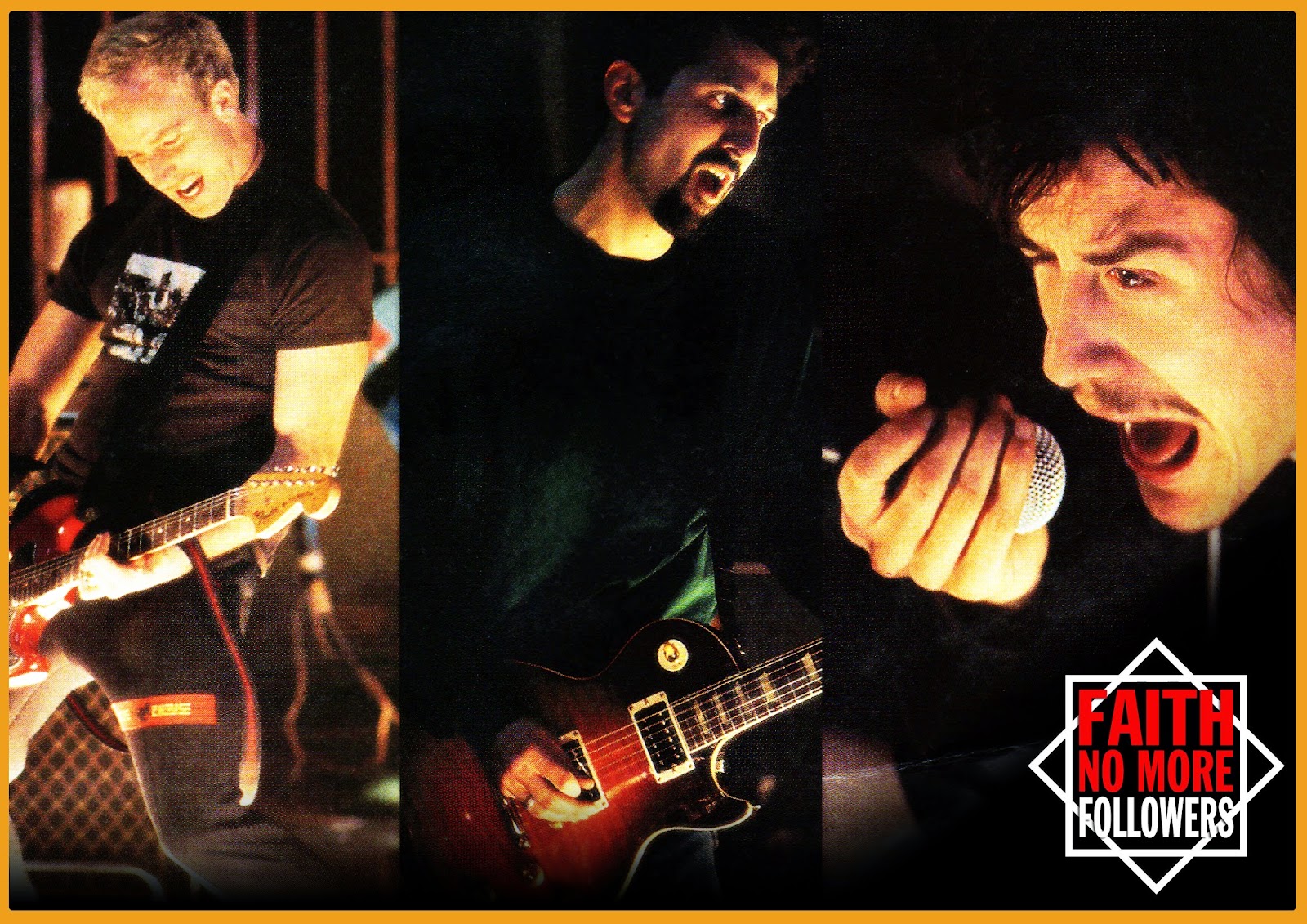 The lack of keyboards was explained when the band did interviews about 'KFAD'. Roddy faced a few personal demons and lost loved ones and wasn't as involved with the writing and recording of the song. We can wonder how 'DTG' would have differed had Roddy been more involved. He appears in the video playing guitar and also took up a six string onstage live throughout the consequent touring. Without elaborating on this troubled period of Roddy's life, he did say this to say:
"Yeah, I understand how that album is revered but it's not my favourite. I wasn't that present in the song writing and i was going through some tough stuff at the time" - Roddy 2013
The most notable difference in this song to previous FNM material is the production. The band decided to use Andy Wallace producer of many revered rock albums, a shift from long time producer Matt Wallace. He took them to an isolated studio in New York where according to band they had 'controlled cabin fever'. His skills deliver a more disciplined and compressed overall mix which changes the feel of the band's music radically from what we've heard before.
"It seemed ultimately self defeating to continue to do records with the same producer. Matt did some great stuff with us but over the course if your career why limit yourself to one person? We're the kind of band that prides itself on our diversity, versatility, change." - Roddy 1995
Patton has never really elaborated on the lyrics to 'DTG', but finding a final resting place in death or looking for a place to hide are an obvious interpretation.
Patton had this to say on the lyrics from 'KFAD' in 1995.
"I can't actually write words before music. Words are the last thing: before the words, I hear sounds. Sometimes the words have no connection to anything; they just have to fit into the sound. I'm sure a lot of what was going into the words on the new record were things we all were going through at the time. Kind of subtle ways of getting revenge on those people. People you see everyday, situations your in everyday that maybe it's better if you don't confront them. Everyone will know what its about but no one will talk about it. It's a beautiful thing" - Mike Patton 1995

The single was released on 12" coloured vinyl and a double cd pack with artwork by illustrator Eric Drooker. The full illustration was revealed when the album was released as an image taken from Drooker's book 'Flood! A Novel in Pictures' from 1992. The snarling police dog on the cover is a perfect accompaniment to the suggested violence of the song itself, creating a perfect package. 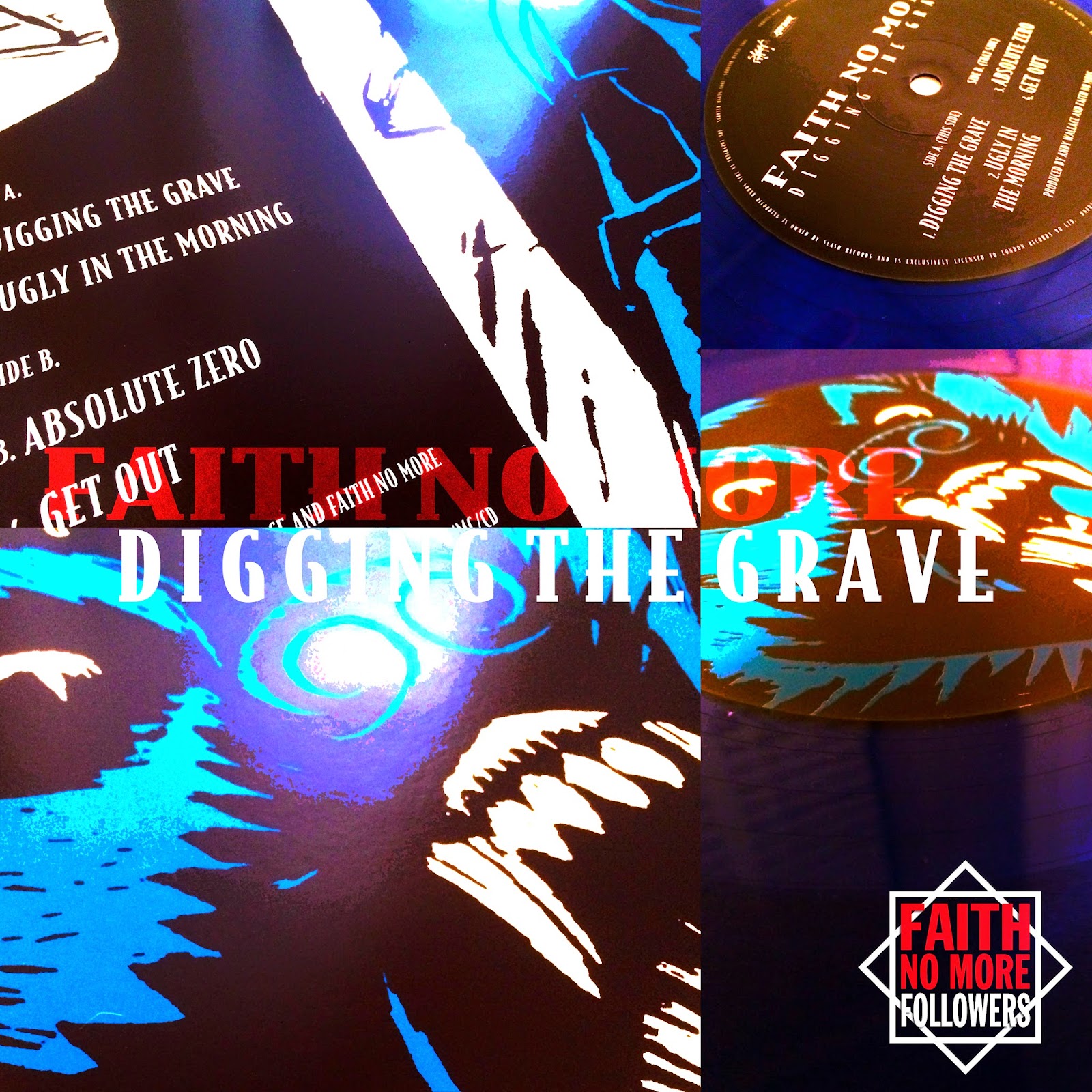 'Like the rest of the singles released from the album, it failed to chart in the US. However, the song became the band's fourth-highest charting single in the UK. The single reached number 16 on the UK Singles Chart, and number 12 on the Australian ARIA Charts; becoming the 91st most-played song on Australian radio that year.' - Wikipedia.

Bill offered a theory as to why US radio had developed an aversion to playing FNM:

"Radio will say the our song 'Digging The Grave' is too hard for them, too metal. If we do a song like 'Evidence', then none of the metal stations will want it!"

The album was very important to the band personally and they were very positive about it.

"The new album was a catharsis for us. We made a record that was very liberating. I think we really learned how to use our power as a unit. I mean, I have a total submarine view of it, but I see it as more if a release type thing. There is a great amount of stress let off on this album" - Bill 1995

"The new record is like being hit with a fucking fist, with one finger sticking out. This is the best record we've ever done. But it doesn't just come out of your butt on a plate. The songs, the performance, the recording process, the tones, the mix, the mastering. It's a whole bunch of shit that makes a good album". - Mike Bordin 1995

The importance of this song in FNM history is really how the departure of Jim Martin affected the band's image and sound. Would the band still have the edge without the tension between members that helped to create previous albums, would a happy FNM camp produce the same results? When Bill was asked on how the writing process differed without Jim he had this to say:

"We've never written stuff with Jim, as a band. Usually we'd give him a tape and he'd put stuff to it because he didn't like practicing with us much" - Bill 1996

According to Puffy in an interview with an Australian radio station the departure of Jim helped them focus on the new material more. 'Very to the point, very straight forward and very strong'. Here's that audio interview in full:

But it wasn't entirely plain sailing and the process still was fraught with difficulties; Roddy's personal problems, Trey's departure and a nasty car accident. Patton wasn't happy with appointment of his Mr Bungle co-member in the first place.

"Trey didn't come highly recommended by the only guy in the band that knew him. Patton said, 'he's a great guitarist, he'll do the job, but he's not dependable and he'll fuck us up ultimately due to his lack of any sense of responsibly' " - Bill 1995

Although Bill also says how happy they were with the end result.

"It's heavier, it's more direct and it's the first record where we had the guitar the way we wanted it. Now it feels we're a dog who's been let of the leash" - Bill

A lot of fans miss Jim greatly from the band but there is no denying Trey is a outstanding guitarist and his input created a new phase in FNM's history. And they pull it off, 'DTG' is an awesome tune it is all out barefaced aggressive rock! Like the bark of Drooker’s police dog it tells no lies and there’s no fucking about.
'Digging The Grave' is not by any means the best song on the album but it is a great song to listen to when you want to jump around and let of some steam. I think that's how band play it too as a stress release. Head down all in!

Originally published on Faith No Blog but updated and rewritten for this page.