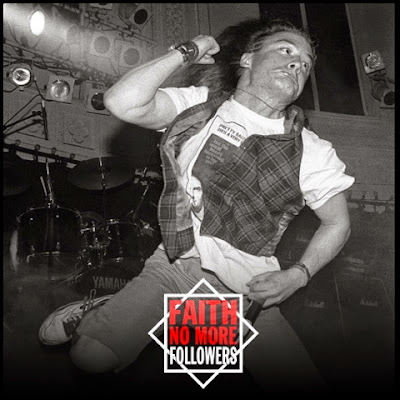 On this day in 1990 FAITH NO MORE were in London returned to the UK Capitol for the forth time, unbelievably the third supporting their album THE REAL THING. They were on the aptly named 'Epic tour ' a run of shows to promote the release of their soon to become hit single. Little did they know that after these shows they would yet again return to Europe on the success of the single. 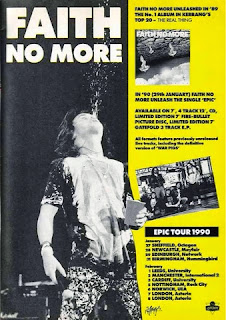 On this particular day FNM played the first of too sold out shows at THE ASTORIA. Here is a review of that show from NME magazine.

FAITH NO More's entrance turns into the kind of tangled, mangled disaster that Birdland probably lie awake at night plotting to instigate. Within 30 seconds of their arrival, the quintet are obscured by a posse of security guards pulling crushed punters
from the mosh pit tnadvertently allowing less endangered types the opportunity to claim their moment ot stage-romping glory.
The band continue pumping invisibly through the chaos until with staggering irony - the set grinds to a halt after 'Falling To Pieces'. It seems that the 'safety' barrier has collapsed, so while roadies and biz-types sandwich flight cases 'twixt stage and audience, the latter vent their frustration by directing a rousing chant of "You fat bastards!" towards the intrusive burly beefheads. Anarchy, eh? "F— the band, I just wannaseea riot!!!" screeches a fine, upstanding pillock of society. Mercifully, despite one's mild sense of satisfaction at witnessing such an exposure of The Astoria's abhorrent facilities, his wishes remain unfulfilled. Back on bounce the Faith boys, rifling through 'The Real Thing' and striving to live up to Guns N' Roses' assessment that Faith No More are top of the rock stakes, whatever that means.
For sure, FNM take a trip through Eclectic City, searching to master a bucking blend of generic charactertstics. Rock and rap
have always been perfectly-suited bed partners, going on cock counts and ego wank stains alone, and the San Francsiscans
grind together the disparate sounds with betltgerent ease. 'Epic' is the pick ofabluster-like bunch, a collision of snarls, flailing guitar from Jim Martin (looking uncannily similar to Roy Wood on hunger strike) and punishing aggression. 'Surprise! You're Dead'' lays with the grim corpse of grindcore, all speed and no room for weeds. 'Woodpecker From Mars' Is a bizarre ragbag of Instrumental Ideas, the grandiose keyboard patterns suggesting that Yes and Metallica can work together, against all wads.
So they've got a handful of brilliant titles. A barnload of whacked-out inspiration. A trickload of ruck-along tunes. Frontman Michael Patton may strut and swagger, but he raps like Falco and his farynx often falls to match his movements.
Ultimately, confused by their fusions, one has to appreciate their ricocheting adrenalin levels and blinding colours, but sod the hybrids. This is hyped-up, hypermarket rock 'n' roll, a sallvating, ambitious beast encaged by small relevances like predominantly white metal audiences and a victory for volume
over barrier-breaklng ingenuity. They kick hard, but all too often kick themselves In the shin. The future of rock? Faith No More will - deservedly - be giants. Pomp up the jam. __. 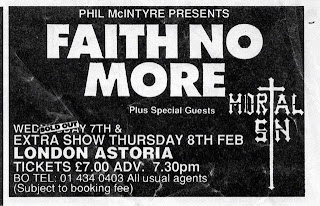