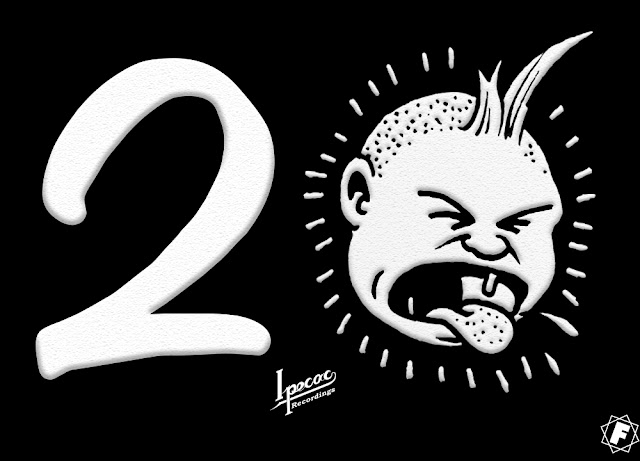 On April 1st 1999 Mike Patton and Greg Werckman founded Ipecac Recordings.
In 1999 Patton had said goodbye to Faith No More, the band who had facilitated his rise to fame and with which he had already broken boundaries through a stunning catalogue of music. He had proved himself an extraordinary musician and songwriter whilst also exposing his more eccentric tendencies through Mr. Bungle and his work with John Zorn. Fans were eager to follow Patton down whichever path he chose.

The label soon became a conduit for Mike Patton's many and varied projects such as Maldoror, Tomahawk, Mondo Cane and Peeping Tom. In it's early development The Melvins joined the fledgling company which paved the way for more acts and soon Ipecac Recordings became a fully functioning record label.

Ipecac broke ground with honest and fair deals which larger labels failed to offer this meant artists retained ownership of their music. These policies and with Patton steering the ship meant more acts were attracted to releasing their music with the Ipecac stamp, and soon Ipecac became one of the most prestigious, unique and revolutionary labels around.

In modern times a record label with the values upheld by Ipecac is more important than ever before. We at Faith No More Followers have received incredible support from Greg and Shawn and we congratulate you guys on 20 years of making people sick!

Ipecac has been home to some incredible artists and we reached out to a few of them to help celebrate with us.

"I have been a part of Ipecac Recordings since the release of their first album. (1999 / Fantômas / Amenaza Al Mundo) When I first started working with Mike and Greg I was gifted not only great friends, but with complete creative encouragement. No labels or limits.
Challenging boundaries and making people uncomfortable has been the majority of my life's work. At Ipecac I was embraced for my intense, often odd, musical taste and encouraged to keep freely expressing myself through any style. I am very proud to be apart of the Ipecac family and hope to continue "making people sick" for many years to come.
Mike and Greg, Congratulations on 20 years of insanity and thank you for creating an artistic space where individuality rules and mainstream has been 86'd."

"Ipecac was initially created as a sort of haven for misfits, specifically Fantômas, at the time. The label continues to be a grassroots family whose business model is transparent. To be able to directly call and chat with the owners of the label about possible releases, licensing, distribution, etc is refreshing. And there are no inflated hopes about hit-making. It’s a very realistic place to launch one’s creativity."

"We love being a part of the ipecac family. Having the privilege of being associated with the iconic label itself has helped us find like minded music lovers in all corners of the world. They’re all pretty weird people too. Believe me."

"I'm grateful for the existence of a label like Ipecac, as there are only a handful that exist on this planet. I'm also appreciative of the camaraderie that Ipecac and Three One G have. Anyone that would welcome myself and my band mates, from multiple bands, has to be just as weird as I am. It's also an honor to be part of a really jacked up and eclectic mix of artists who I admire and respect. For that, I would like to say thank you to Ipecac and the people who put up with their entire roster."

"Twenty years in and still making people sick and blowing minds!  Given that we - the Ipecac staff and artists are just a bunch of hopeless record-collecting jerks, it kicks ass that Ipecac is still here. I’m so very proud and so grateful for being a part of the family.”

"It's hard to imagine a label more diverse and challenging than Ipecac. From the start they've been uncompromising and unaffected by trends. It's not easy running a label-you have to say "no" on occasion. I'm fortunate to have had a long running relationship with them. Long may they reign."

"Ipecac has been home for me since 2002. Mike and Greg have never put any restrictions on us or our music. They have allowed us to be us and gave us the space and support to grow into the musicians we are today. Being on the same label as, and touring with the Melvins, Tomahawk, Fantomas, Isis, (and so many other incredible musicians) taught us what it is to be a touring musician and uncompromising artist. I am forever grateful for all Ipecac, Mike Patton, Greg Werckman, and the entire staff through the years has done for us. I am more than honored to be an Ipecac Recording artist, a member of their Board of Directors, and Godfather to 6 of Mike Patton's 7 children. (6 out of 7 ain’t bad) When Patton bailed the Oktopus out of jail.... that's more than a label b... that's family. Congratulations on 20 years familia! Here's to many many more! Salud!"

"Ipecac has never ceased to be a pillar of innovative, incredible, powerful , and just downright fucking weird records. I wouldn’t want a label any other way. They take chances. That’s what good art does. It takes chances. Thank you for everything you’ve helped other artist birth into the world."

"Being part of the Ipecac family has been one of the highlights of our career.  We've grown up following and looking up to their bands, as well as their ethics as a label.  It's surreal to us every time we flip over one of our albums and see that logo!  Aside from being huge fans of theirs, it's an honor to work with people that respect music as an art form.  I can’t think of another label out there who really does favor the artist's interests, and operates in such a transparent way.  No bullshit. That should be their alternate slogan. We love Ipecac, here's to another 20!"

"Zu is a weird animal. It’s always been difficult to fit into a festival program or into an agency roster without feeling like fish out of the water. When we first met Mike back in the days in early 2000 and he talked about his new label we thought that it would have been a nice bowl to swim in…but we weren’t ready.
In 2009, 1000 concerts and 6 records later we made our first release with Ipecac Recordings and we felt we finally found the right place, surrounded by other weird animals!
Happy birthday Ipecac Recordings! Thanks for everything!"

"It’s always been difficult for a label to figure out what the hell to do with me. I don’t do just one thing, I do everything, that’s no exaggeration. If anyone could understand and appreciate that approach it would be Mike Patton. Ipecac doesn’t have a formulaic, cookie cutter approach to releasing their artists material. It’s not a ’one size fits all’ marketing strategy like most labels try to get away with. They really take their time to figure out clever ways to give each artist their stamp of individuality. They basically let you do what ever the fuck you want, granted they like what you are doing. And they ALWAYS ask what your ideas are before offering their own. And they are genuinely friendly fucking people. I feel an honest sense of ease knowing I can trust this label."

"I speak as a designer, but one thing I have learnt is that you get included in the Ipecac family, you really support each other. I must tell a story about my own entrance into the "family" as a young designer. One thing I never dared to tell Mike or Greg back in 2000 (when I was asked to do sketches for Fantômas “The Director’s Cut”), was that I had only made like one or two CD covers, for friends' bands. That they believed in me (an obviously an inexperienced designer), and let me have the opportunity was unreal. Although the Internet had existed for many years, it was strange to communicate only by email. It is also unreal that this is almost 20 years ago. I have many times thought after countless hours, that the fans should know how much time and effort we put into designing these covers. I want to thank Ipecac for all the fun projects and wish Mike, Greg (and all the others who have worked at Ipecac over the years) a wonderful anniversary! Skål!"

"I will always be grateful for our time on Ipecac. For me, it was a dream come true. Having grown up in the nineties on a steady diet of freaky underground rock, getting to join such a prestigious roster was and is an enormous point of pride. While our tenure was brief, we had a wonderful time working with Greg, Mike, Shawn and Monica. Congratulations! Here’s to another 20 years!"