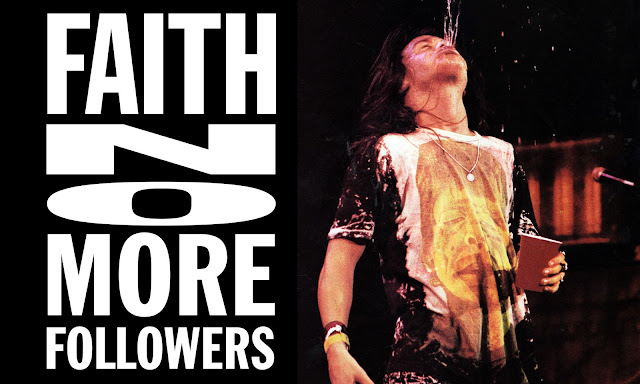 Mike Patton first performed on stage with Faith No More on November 4th 1988.
This is an update to our previous article on Patton's first ever live show with FNM at the Ibeam in San Francisco.

The full article can be read HERE.

We have acquired the only full review of the show written, by Steffan Chirazi from issue 215 of Kerrang! magazine. This would also prove to be the very first time Patton was mentioned in any mainstream publication.

IT STINKS in here, and this is a reminder as to what ugly spent sweat smells like. It's a different stench to that of normal live sweat, for when Faith No More decide to cook, it's than just perspiration, it's mucus, gob and hair, stale farts and a whole lotta twisted love. And Faith No More, new singer and new songs, are cooking up a vile one. For all those who thought life began with Chuck Mosley, read on and learn. Faith No More are one of those
beasts that, when firing on all five cylinders, produce enough gagworthy stenches and horrorstricken sounds to induce even the most passive bunch into a state of mass delirium. I personally only ever saw it once before, the full cylinder shot that is, a show in San Francisco's Fillmore where Chuck wasn't drunk out of his mind, wasn't arguing and was therefore at ease with the rest of the band.
Some say Faith No More rely inner hatreds to achieve their sound. That's just a load of
pretentious unnecessary and analytical bollocks. Mike Patton, 20 years old and cute enough to doubly cover the admittedly interesting antics of Mosley, behaves like a cold turkey with cabin fever to match. He doesn't simply eat the floor, he swallows the whole damn
thing with one utterly enormous gulp, spitting bits of it back as the evening progresses into the completely chaotic organisation that is Faith No More. Jim Martin, glasses rested for the evening, wobbles his head both in time and then in dismay when his second guitar comes
through sounding like six cats being slammed off a wail by the nastiest bastard you never knew.But he does not get overly aggravated, he merely tunes, takes a turn to the left and is
immediately pushed to the ground by the charging Patton. Martin stays down, happy to be
there, and Patton goes on to break one camera, six glasses, a mike stand and nearly 'Puffy'
Bordin's kick drum. Quite impressive for a man of his age. And before the cries of 'so what, can he sing?' rain down, the man would leave the crispest lark at a loss. He can not only sing, he gives old FNM songs an identity and range as well as making new material seem so much more huge, so much more versatile. Remember, these new songs were written with a voice in mind as well as four instruments. Pick of the new ones must be the sick head-whipper 'Sailor Song' (Surprise You're Dead)', an ugly melee of guitar crunch and rhythms big enough to collapse your chest cavity, whilst 'The Violin Song' gives Rowdy Rod the chance to fuck around with some expertise before ushering in a song of might and meat. The sound, of course, was piss awful  but then who expected anything else here. We were here to see if Patton had the feet to match the old boots. His feet simply squished in and split the crusty leather apart. Mike Patton has big, big boots and Faith No More have new tough soles, it's gonna be a mighty march forward, rest assured.