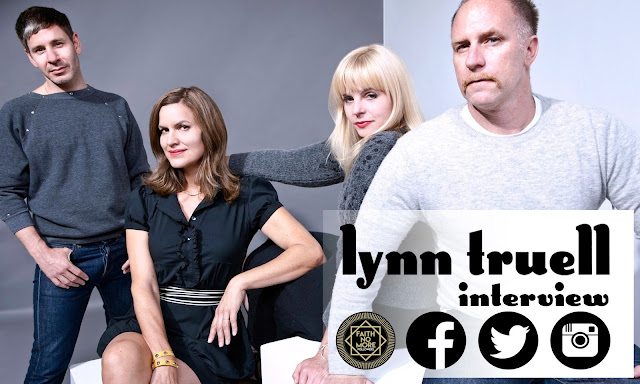 Lynn Truell of Imperial Teen reveals exclusive details about their next album.

Formerly of San Francisco punk outfits: The Wrecks, The Dicks and Sister Double Happiness, Lynn has played drums with Roddy Bottum in Imperial Teen throughout their twenty year career. She kindly gave up some time to talk to us about the recent return to the stage, an upcoming Imperial Teen album and more. Lynn also celebrates her birthday today! 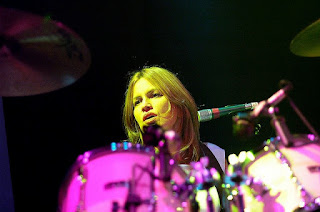 
If I'm not mistaken this was the first Imperial Teen show since 2014, how was it to be back onstage together?

Yes. We had not played live since July of 2014 for the MERGE 25.  It is a joy to get together, to hang out and play our songs again. Onstage we usually try to stay pretty connected and make eye contact and be present with each other. Before we go onstage, no matter how big or small the crowd, we have a moment and come together in a way and tell each other to have a good and fun show. Keepin' it real!

Ha - We played the longest set ever - paralleling ourselves with the Boss. Of course, not nearly 4 hours did we play, but we added about 3 extra songs into the regular set and an extra encore one. 18 in all. Epic for us. We added Hooray into the set which we'd not played in maybe 10-15 years. I think we practiced it twice the day before. It's all about the 4 of us and our instruments meshing. It's an emotional song for all of us. Will just rips the guitar on it. Pretty cool doing that song again.


Imperial Teen have a loyal and caring fan base was I good to see familiar faces in the crowd?

It's always good to see anyone in the crowd! We are one with our longtime fans - a set of which even came from Vancouver, Canada to see us in SF.  And to hear them singing along - well, any band usually likes that.


After the long periods apart where you are individually busy how easy is it to return to Imperial Teen?

It is easy in the heart but ain't easy strategically. We live in NYC, LA, SF, Denver. So 3 people always have to travel by plane to get ourselves in one place. We don't have a practice pad anymore so that's one more thing to work out when we get together. For the SF show, we practiced at FNM studio. And I have a studio of sorts in my basement in Denver, so that eases up some of the planning. I am the only one with kids and I have 3 of them, so it's pretty hard to leave town on my end. That said, I have a music-fan of a husband, so he's happy and very qualified to take my place when I leave. But, yes, as you stated, we all have very individual lives in our cities....


Roddy in particular has been very busy over the last two years with FNM and Sasquatch The Opera. Did you catch any FNM shows or the Opera?

Yes. Finally. I'd planned to see the first SF show but couldn't make it at the last minute. However, I saw them at Red Rocks here outside of Denver. It was truly dreamy. Especially with the white and flowers of their stage, surrounded by the beautiful outdoor amphitheater and those Red Rocks. They were amazing - just loved every little thing about their performance.  I didn't see Roddy's Opera. We all sent flowers to Roddy opening night, except we were off by a week -- at least early and not late! He is working on Sasquatch quite a bit in the upcoming spring. He has a cool opportunity coming up with that. I'll get to see it...


You got up and played with Dinosaur Jr at their 30th anniversary show how was it?

That was pretty cool. I've known J for like 30 years and it was an honor and a blast to play with him again. (I'd done a TV show in the U.K. with him back in the 90's when Murph hurt his hand and Dino Jr had a top 10 hit on the charts over there.) Over the years, the rest of imperial teen has gotten to know him, too. Since I was in NY, and staying with Roddy, J asked R to play rhythm guitar. It was just so cool. (Roddy on my coat tails he and I joked.) Henry Rollins introduced the evening from the balcony.  He spoke of the energy and excitement and feelings of finding a "place to find other like-minded" in coming together for music at that time - the punk rock/grunge, pre-indie time. He said it so well.


Earlier in the year the band announced that new songs were being written. Can we expect a new album soon?

Yes, I'm flying to LA right now to finish up some stuff with Will. We've gotten together in various sets of ourselves and have been writing songs. We have maybe 20 now, but will skim it down to 12 ish - saving only what we hear as the best. If we can record these for any type of full album or EP, it might be close to a miracle. But yes, that is the plan.


If so can we hope for a tour?

A traditional tour is doubtful. But we'd definitely want to do some shows and or festivals. We do love playing live.


We spoke to Jone in May about the 20th anniversary of 'Seasick'. What are your memories of the first album and live performances with the band?

So much freedom and possibility and ....colorful....Shaping and sharing our sound ....vulnerability....