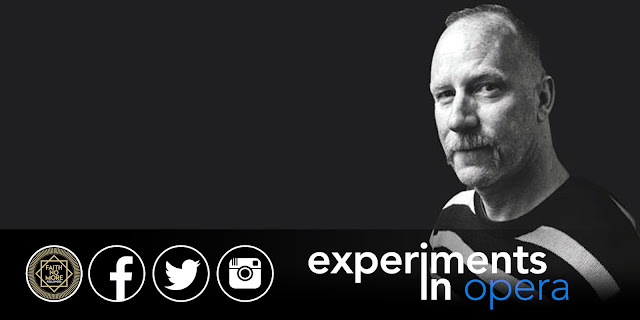 Roddy Bottum’s second opera The Ride will be featured on EiO’s upcoming Story Binge II at Merkin Concert Hall at the Kaufman Music Center on December 15, 2016 (tickets here). Experiments in Opera sat down with Roddy to discuss his piece, his wistful feelings about being part of an older generation, and why flutes, synthesizers and drums are the perfect musical accompaniment for a monotonous bike ride.

EIO: Tell us what your opera is about.

BOTTUM: My opera is called The Ride and it’s about two bicycle riders who are riding in a charity bike ride from San Francisco to Los Angeles to raise money for AIDS.  One of the riders is an older gentleman and the other a younger gentleman: two different generations raising money for AIDS riding side by side on bicycles. The opera to me is more about the generation gap between older gay men and younger gay men. The older generation of gay men who dealt with AIDS as a life threatening disease and were in the trenches for the first generation of the disease helped their friends get through life or death situations.  The generation of gay men today who are on PrEP drugs and TRUVADA don’t really view the disease as life threatening. It’s just a different relationship. And that, to me, is interesting.

EIO: You have done this ride a couple of times. What was it like to be on that ride?

BOTTUM: I’ve done the ride two times, and it really changed my life. It is a really miraculous experience. Geographically, the landscape from San Francisco to Los Angeles is the most beautiful landscape in the country.  And it is great to be surrounded by people who were only invested in this particular ride just to raise money and help people. It’s also interesting to me, what the brain does when you’re riding a bicycle for a long time. Your brain starts doing weird things. I have found it interesting to compose a libretto based around patterns and things you do in a cyclical way.  The music for The Ride is loop driven, which seems apt especially with subject matter of driving for long periods of time in a straight line. It’s really monotonous and I wanted to capture that.

EIO: The notion of conversations between generations is a fairly common thing, what does this dialogue mean to you personally, whether it’s about you as a musician or you as a gay man?

BOTTUM: For me, the story sort of transcends the actual disease. It’s not a story so much about AIDS. It’s more about a generation gap between older people and younger people. As a person getting older, I tend to look down on young people and I think that’s sort of a typical thing. An older man will say, “Oh when I was your age, you know, I had to buy my own records and hear ‘em for the first time and just spend money and like learn the record that way.” This attitude contrasts with the reality that kids today can just download music on the computer. It’s a weird place to be but I find myself going in that direction. That’s where this opera experience has taken me, dealing with my generation as a gay man as opposed to the younger generation of gay men and trying not to be judgmental and to keep an even keel with my ethics.

EIO: What do you want people in the audience to take away from this opera?

BOTTUM: I want to push a sense of history about the disease of AIDS. In one way, I think we can learn a lot from people who dealt with AIDS in the first generation.  And, at the same time I want to stress universality. It sounds crazy, but all people are created equal and are all open to the same risks and life threatening concepts that everyone else is.

EIO: The instrumentation for The Ride is really unique.  It’s probably the first piece ever to have four flutes, a drum set, a synthesizer and two singers. What was your thinking behind this instrumentation?

BOTTUM: When I approached the instrumentation of this opera I was just thinking about the theme of bike riding.   Kraftwerk’s “Tour de France,” is the quintessential bike sound to me. But for some reason flutes to me evoke the sort of bicycle spirit, I don’t know why, but that just was in my head. And using flutes and synths together felt super clean so I knew I had to dirty it up a little and add something organic and a little bit rough. Live drums felt like a good rhythm stabilizer to put in there.