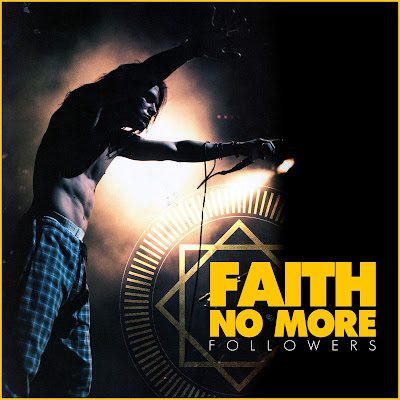 Following on from our last two articles about Mike Patton's audition and the beginnings of The Real Thing in FNM, this third part to our trilogy is concerned with his very first live performance with the band.

In 2013 I wrote a similar article for Fnmblog, but since then I have accrued more evidence and quotes from the band.

On November 4th 1988 Faith No More played at the IBeam in their hometown of San Francisco. This was their first live performance with Chuck Mosley's replacement Mike Patton fronting the band. Steffan Chirazi, who had already championed FNM since 1987 and written the band's only magazine feature in Kerrang!, wrote this preview.


FAITH NO MORE - I Beam SF.
Your chance to check out the new version of the SF funk/punk/metal/rap kingpins. New vocalist Mike Patton of Mr Bungle has come on board to replace Chuck Mosely. Early indications are that the group's moving in a more metal direction. These guys are god-like in England by the way.

At this stage the songs for what was to be their next album The Real Thing were on the whole written. Demos had been recorded and submitted to the record company for approval but work on recording the album itself would not begin until December that year.


This was therefore a show to judge public reaction to the new music and more importantly the new singer. The reaction of the crowd was not all positive and not all returning fans were taken by the radical change in vocal style.

'The first show I did was in San Francisco about November 1988, and after the gig the bouncer brought this note back and said, 'Some girl asked me to give this to you' I'm like, 'Oh great, cool, neat- my first groupie!' And silly me, the note read: 'You stupid, sexist, macho asshole. What are you doing? Get off the stage. Where's Chuck? He rocks... All this stuff you know. I just went, 'Killer! I'm going home '"

However Chirazi's review of the show was much more complimentary

Who knew what to expect when FNM unveiled their new singer at The IBeam recently? But Patton lay  waste to the band 's previous singer. Patton's advantages.  He wasn't drunk, he can sing, he can dance. He has energy and conviction. The band seems recharged and ready to roar with new material that could break the band big. By the evening's end, the scene sported a return to real ugliness, broken glasses, a broken camera and a piece of Patton hate  mail that read 'You guys were cool, but get this long haired asshole off the stage...' To the person that write that - stop taking drugs and realise it when talent spits you in the face. - Steffan Chirazi. Bam Magazine.

I spoke to Bill Gould about the show and although his memory was hazy he confirmed that the set list was mainly comprised of songs from The Real Thing and according to Chirazi From Out Of Nowhere, Falling To Pieces and Underwater Love were in the set as were As The Worm Turns, We Care A lot and War Pigs with also a strong possibility that The Cowboy Song was in there too!


In my previous article on this subject I spoke about this show being filmed and appearing in the From Out Of Nowhere video. This however seems to be very unlikely, we spoke to Andrew Bowie from Faith No More Gig Database and this is his theory.

Patton's first gig has been confirmed as being the November 1988 I-Beam show, one final mystery remains - when was the 'From Out Of Nowhere' live footage recorded, and when did Patton hurt his hand?

Again thanks to BAM Magazine we have record of three I-Beam Faith No More shows when before The Real Thing is released: 4th November 1988, 24th Feburary 1989 and 7th April 1989.

If we take The Real Story at it's word, the 24th February gig would be the I-Beam show The Real Story refers to. If so, the band managed to play a gig the next day in Berkley, and keep touring throughout March, even though Patton's hand was badly cut.

It seems more likely the 7th April 1989 gig is the gig where Patton hurt his hand as there isn't any record of any gigs after this date until June. The band is known to have taken a break around this time, with reasons including "to enable Jim Martin to have surgery" and also due to Patton's "unfortunately accident".

As further evidence, an article on Faith No More by Michael Snyder in the San Francisco Chronical from 9th July 1989 says:

A couple of months ago, Patton could have written a symphony of misery. The occasion was a video shoot for the new LP at an I Beam gig. First, Patton cracked his front tooth in half on his mike stand. Then, during the band's cover of the Black Sabbath number, "War Pigs," Patton lost his footing, tumbled forward and smashed his hand against a broken bottle on the edge of the stage, severing a tendon. He finished the show and, the next day, spent 5 1/2 hours in microscopic reconstructive surgery. "The nerve is growing back," he said, "and we got it all on film."

A couple of months before early July (and more likely mid June when the article was likely written) would fit with April. 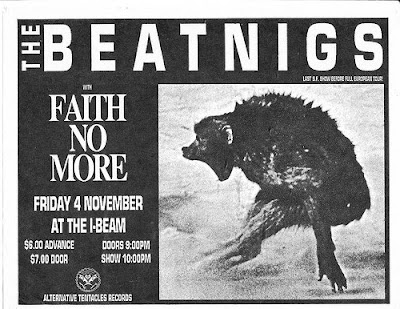 Thanks to Bill and Andrew for the help.