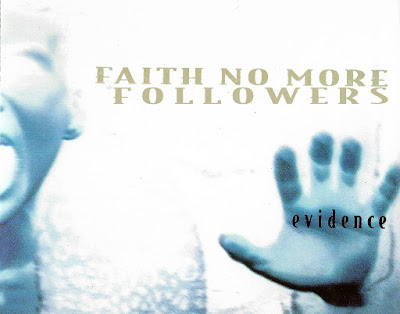 On July 17th 1995 Faith No More released their single Evidence.


'The band’s story is as much about who got left behind along the way as who made it to the finishing line. The 1995 album King for a Day … Fool for a Lifetime proved they could live without Jim Martin, even if it didn’t make its mark on the charts. (Big Jim had gone off to become a champion pumpkin farmer). It was their most eclectic and far-reaching collection to date, and sounded like the one that took the most effort. Evidence, a slick, atmospheric slab of R+B featuring a croon by Patton that owed a debt to the Family Stand’s Ghetto Heaven, crept into the top 40 when it should have done a lot better. Special mention should go to guitarist Trey Spruance, whose understated licks brought such a vintage touch to proceedings. Patton had been preaching the virtues of Burt Bacharach back when Bacharach wasn’t fashionable, and now, thanks to Noel Gallagher and other pop stars espousing the old guy’s songwriting prowess, Burt was suddenly hip again. Not for the first time, Faith No More were ahead of the pack, which probably made it all the more galling that they were being forsaken.'

Patton starts cakling--a high, weird Tex Avery laugh more animated than his surreal singing personas--and the effect is more unsettling than seeing him mad. Perhaps he is mad, and Faith No More fans are mere visitors to a sort of traveling asylum. After all, why would a rational human being leave a trail of droppings across U.S. stages for hapless clean up crews to discover? And is that what this "scat" singer is celebrating alongside Bottum's soothing-but-funkified keys on "Evidence"? "Step beside the piece of circumstance/ Got to wash away the taste of evidence," he groans, painting a visceral but nonetheless stomach-churing picture."I, uh, don't remember, I claim ignorance," Patton weasels when quizzed about the track. "I wrote the song and that's enough--you have fun with it. I don't have to tell you shit." The point exactly. Oddly enough, he doesn't shy away from this purloined-doodle rumours. "You do what you gotta do to get you through," he explains. It sounds quite logical. "It's like , you're a musician, right? You wake up at 2:00 in the afternoon, you don't have any responsibilities, you don't have any certainties in your life, other than the fact that you're gonna play that night. So you may as well throw a couple of others in there, something to look forward to."Bordin seems to understand his teammate's curious credo. "But we don't like living in the past," he chortles. "We've gotta find some new habits to do this time around.""I'm gonna leave part of my colon behind this time," Patton declares. "Yeah!" Bordin responds. "It'll look like little pieces of sausage casing!" Then the duo breaks into happy hysterics, infatuated with its own morbid sense of humour. But Bordin--a founding father of Faith No More along with Bottum and Gould (Patton clambered about on Real Thing, the band's third release)--suddenly stops laughing, turns poker-faced serious about the tell-tale "Evidence" cut. "That's the one I'm most proud of," he says. "All the loud songs turned out really great on this album, really aggressive, and we've always done that really well. But the smoother songs I've never felt we've gotten exactly right. And this one is pretty damn close to being *exactly* right."'

More on the song Evidence

Labels: 1995 Evidence Faith no more King For A Day Fool For A Lifetime