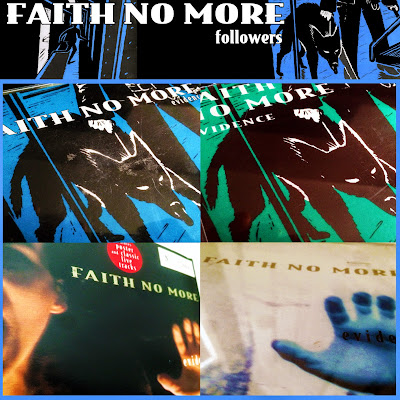 With music credited to Bill Gould, Mike Bordin and Trey Spruance, lyrics by Mike Patton, Evidence was the third single released from 'King For A Day....'

It saw it's initial release on May 8th and July 17th 1995 in the UK. It reached 32 in the UK charts, 27 in Australia and 5 in Finland.
The single was released with several different covers. The same Eric Drooker sleeve as 'Ricochet' in orange and blue with promos in red, purple, grey and aqua. The UK release cover was a still from the video of a woman screaming, released in white and black as a limited edition digi-pack with free poster. 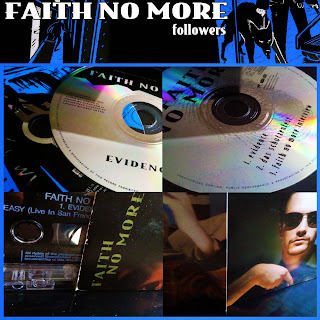 The b-sides included performances from San Francisco and the Forum in London. Plus an interview with the band.

Patton starts cakling--a high, weird Tex Avery laugh more animated than his surreal singing personas--and the effect is more unsettling than seeing him mad. Perhaps he is mad, and Faith No More fans are mere visitors to a sort of traveling asylum. After all, why would a rational human being leave a trail of droppings across U.S. stages for hapless clean up crews to discover? And is that what this "scat" singer is celebrating alongside Bottum's soothing-but-funkified keys on "Evidence"? "Step beside the piece of circumstance/ Got to wash away the taste of evidence," he groans, painting a visceral but nonetheless stomach-churing picture.

"I, uh, don't remember, I claim ignorance," Patton weasels when quizzed about the track. "I wrote the song and that's enough--you have fun with it. I don't have to tell you shit." The point exactly. Oddly enough, he doesn't shy away from this purloined-doodle rumours. "You do what you gotta do to get you through," he explains. It sounds quite logical. "It's like , you're a musician, right? You wake up at 2:00 in the afternoon, you don't have any responsibilities, you don't have any certainties in your life, other than the fact that you're gonna play that night. So you may as well throw a couple of others in there, something to look forward to."

Bordin seems to understand his teammate's curious credo. "But we don't like living in the past," he chortles. "We've gotta find some new habits to do this time around."

"I'm gonna leave part of my colon behind this time," Patton declares. "Yeah!" Bordin responds. "It'll look like little pieces of sausage casing!" Then the duo breaks into happy hysterics, infatuated with its own morbid sense of humour. But Bordin--a founding father of Faith No More along with Bottum and Gould (Patton clambered about on Real Thing, the band's third release)--suddenly stops laughing, turns poker-faced serious about the tell-tale "Evidence" cut. "That's the one I'm most proud of," he says. "All the loud songs turned out really great on this album, really aggressive, and we've always done that really well. But the smoother songs I've never felt we've gotten exactly right. And this one is pretty damn close to being *exactly* right."'

"We've always wanted to write a great pop song, Evidence is just that. I think we needed to lose a guitarist to achieve the end result."

"I like that song, it's pretty different for us. It's very laid back, groovy. There are some real strings on it, the punctuating sort of strings... a sort of Soul II Soul vibe."