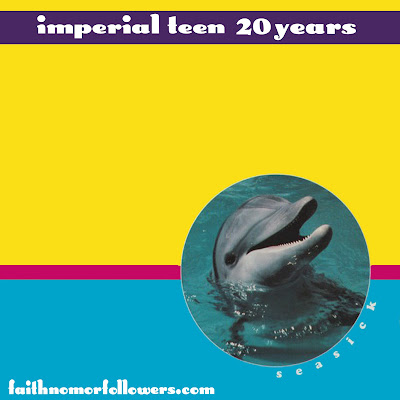 On May 7th 1996 Imperial Teen released their first album Seasick.

'Their hooks are immediate, nearly non-stop, and the happy/sad lyrics draw you in with abstract intimacy.' 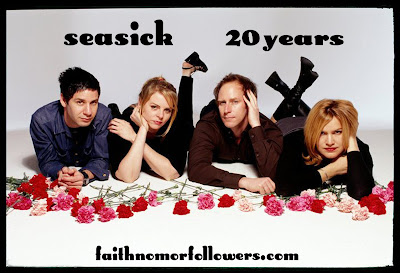 The debut album from these four vibrant characters is an indie pop delight. Similar to all of Faith No More members' other projects it is extremely different , polar opposites in fact, to the music you would find on a FNM album. After the aggressive and complexity of Roddy's last recording (King For A Day) this music is a straightforward and sincere. Whereas FNM thrived off being such contrasting characters, Imperial Teen seemed to enjoy a common ground. There is an undeniable and harmonic chemistry that can be heard through great songwriting.
On this record Faith No More fans were introduced to a new Roddy and the music seems to express his sexuality and passion for music he was so commonly associated with in his personal life.
Twenty years after this debut album the band have enjoyed a long and blooming career that continued during FNM's hiatus.
We asked bass player Jone Stebbins to look back on 1996 and share with us some memories of this album.

How did Imperial Teen get together?

Well, I had known Lynn since I was a kid and we were living together as housemates in San Francisco. Roddy was also living in SF at the time and was a very good friend. Lynn and Roddy both were in bands but really wanted to play in a band together and also have the opportunity to try out playing other instruments. They asked me if I wanted to play and then Roddy knew Will from Los Angeles so he asked him..we got together and really had fun so we kept doing it... here we are 21 yrs later... still having fun.

You were originally called 'Star 69', where did 'Imperial Teen' come from?

We got a cease and desist notice from another band that was already using that name (Star 69). We had never heard of them (still haven't!!) and didn't want trouble so we switched our name. It was a quick decision based on words we liked but it also fit the spirit of the band.

It's been 20 years since 'Seasick' was released. When was the last time you listened to the album? In it's entirety?

Hmm.. I don't know maybe 18 yrs. ago!! I'll give a listen and do the rest of this interview afterwards!!

Ok....What kind of emotions does the music from that debut album stir up now?

It seems like a long time ago. So much has happened since then. Of course this record totally reminds me of such a special, wonderful, intense time of my life and the amazing bond between us .. I love the spirit in it. A few of these songs I totally forgot about! What a trip to listen to it!!

Is it true that it was recorded in a week?

You are all famous for being multi talented on various instruments. Who played what on the album?

We played different instruments on different songs. Most of the songs are Will and Roddy on guitar, me on bass and Lynn on drums but 'Balloon' and 'Copafeelia' are Roddy on drums, me and Will on guitar and Lynn on bass.
The vocals seemed to be the most confusing thing for people, who was singing what...  Will sang the lead on 'WaterBoy', 'Pig Latin', 'Blaming the Baby', 'Balloon' (Lynn sang the backup), 'Tippy Tap', 'Copafeelia' (I sang the back up) and 'Eternity'. Roddy sang the lead vocal on 'Imperial Teen', 'Butch', 'You're One' and 'Luxury'.

How did you go about writing these songs? All together or did you bring material separately to the table?

We pretty much wrote them together. The lyrics were written by whoever is singing them for the most part. I think a few were brought in almost done and we worked them out together. Back then we had the luxury of playing together all the time...living in the same town- it's much harder now.

'You're One' is reportedly about Kurt Cobain. Would you say this album was a release for Roddy that FNM couldn't facilitate?

Hmm.. I think that would be a better question for Roddy. All I can say is that it was an intense time when Kurt died.

The album is very joyous in parts, sullen in others. It also is very sexually charged and homoerotic. Is this a feel you were consciously trying to achieve?

No, we weren't consciously trying to achieve anything except write and play songs. That's just what came out. That's who we are/were at the time.

Is it true that you were Roddy's hairdresser before you joined Imperial Teen?

Nope. I knew him as a friend way before I ever cut his hair. He had dreadlocks when I first met him!! I have cut his hair a bunch of times though!

Imperial Teen hinted via Facebook that they were writing new music. Can we expect a new album and a tour soon?

We are working on new songs and are planning on releasing them. A full-on tour probably won't happen but I'm sure we will play some shows!