FAITH NO MORE / PRIMUS | Did Les Claypool Sing on Epic? 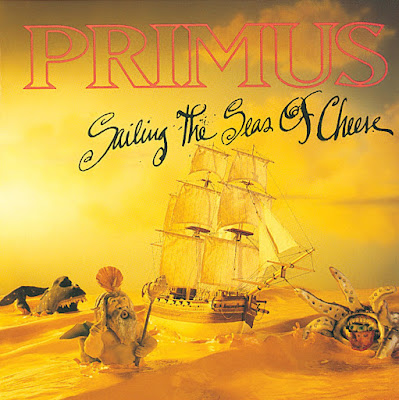 On May 14th 1991 Primus released their second album Sailing The Seas Of Cheese.

Ok, Ok this is not a Faith No More album, however it is a record of pure genius and  there are links between both bands.
Apart from Mike Patton sporting a 'Frizzle Fry' shirt for most of the FNM tour of Brazil in 91, the bands have played together on at least four occasions, the most recent in 2010. And Mr Bungle have shared the bill with Primus also.

'We’ve known those guys for many, many years. Mike Bordin is one of my oldest friends. And Mike Patton, he’s an incredible talent. All those guys are great guys. We started playing with them around San Francisco in the ’80s.'

Mike Bordin and Les Claypool have been friends since the 80's and Puffy appears in the credits on most of Primus' releases.

Here are some details:

On the first Primus album 'Frizzle Fry', the following credits appear: "Special thanx to Susan and Howard for letting us spill bong water into their console (the Exxon/Puffy conspiracy)".
Faith No More is thanked on 'Suck On This', "Hugs and Kisses to Faith No More".
On 'Tales from the Punchbowl', in the song "Over the Electric Grapevine" Primus mentioned Introduce Yourself: "Then 'Introduce Yourself' came on as they barreled through the fog."
On 'Sailing The Seas Of Cheese' Bordin is credited as playing the "Two-Skinned Foreskin Drum" on track 13 -'Los Bastardos'. He is also listed as one of the Bastardos under drums and vocals as 'Puffster'.

Mike Bordin is also the subject of the Primus song 'Mr Krinkle'.

"'Mr. Krinkle' is basically about conversations I used to have with Mike Bordin. Mike Bordin, his hotel room name was "Mr. Krinkle." If you read the lyrics or listen to the song, it's basically about conversations with Mike. He's a huge San Francisco Giants fan, and there was all this talk that the Giants were going
to move from San Francisco. So, "Hey there, Mr. Krinkle, how are you
today? Seems the rumors are abound your team might move away." And he was really pissed off about this! "Hey there, Mr. Krinkle,  let's cruise the bastard boat"— we used to go out on my boat. The thing about Mike, he is one of these guys like Mike Watt — he has a very interesting perspective on things, and he's really good at tossing out these colorful little quips, on how he perceives things. So we would have these great conversations on the phone."

In a Rolling Stone article from 1991, it states that Les sang on the song 'Epic'! As this was information not widely know we asked Bill Gould.

"You know...he might have. There was a big back ground vocal party singing 'It's It"'


In celebration of Sailing The Seas Of Cheese 25 years here is that Rolling Stone article.

Primus has just finished its set at the Warfield Theater in its hometown of San Francisco, the climax of a triumphant sold-out tour. And 2500 people are chanting, "Primus sucks!" Actually, it's the fans' way of coaxing the band back for an encore, the shibboleth of a burgeoning cult following that has made Primus the hottest band on the alternative scene.

Primus bassist, vocalist and all-around figurehead Les Claypool explains that in the band's early days, "We'd just get up there and say, 'We're Primus, and we suck.' And it kind of caught on." The band helped it along with PRIMUS SUCKS T-shirts adorned with various things that suck, such as a vacuum cleaner or a baby with a bottle. "I think it's the greatest thing, myself," says Claypool. "I mean, somebody can come right up to me and say, 'You guys really suck.' And I would just take it as a compliment."

The joke runs pretty deep – Claypool has a cartoon mosquito tattooed on his head because "skeeters suck, too." On his right arm, he's got a tattoo of the Cat in the Hat toting a heaping plateful of green eggs and ham, but that's another story.

And Primus doesn't suck. The band practically stole the show on the ill-fated Gathering of the Tribes tour, which also featured Fishbone, X and Steve Earle, and is currently holding its own on the Anthrax-Public Enemy tour. Primus's third album, Sailing the Seas of Cheese, just hit the 200,000 mark in sales, and the group recently sold out the Palace in L.A. in just four hours. And for all the self-deprecation, all three band members boast staggering chops. Larry LaLonde, a student of Joe Satriani's for three years, makes his guitar sing at high velocity, squall uncontrollably or peal out perplexing dissonances; Tim Alexander's crisp, tricky drumming – full of mighty double-bass-drum bursts and startling syncopations from all corners of his mammoth kit – recalls art-rock maestro Bill Bruford.

But the band's focal point is the charismatic Claypool, a prodigious bassist whose playing can suggest both drum and rhythm-guitar parts, enabling Alexander and LaLonde to freak freely while he talk-sings in a variety of cartoonish voices that would make Mel Blanc proud.

Onstage, the lanky Claypool looks like he holds down a day job at the Ministry of Silly Walks, stalking back and forth from the mike like an ostrich, doing a rubber-limbed Lindy Hop, twirling around while stomping a long outstretched leg, all the while tossing off the most baffling bass lines. "He was a bouncing boy," his mother recalls, shouting over the din of an after-show party. "He used to like to jump in his jumpy chair. I think that's where he got the strength in his legs. I never saw anybody who could jump as well as he did in that jumpy chair."

Tonight, Claypool wears Birkenstocks and loud – no, deafening – black-and-white plaid pants, a red plaid vest and a straw cowboy hat with a jaunty red plume. Backstage after the show, Claypool's proud dad, sporting a Primus T-shirt that says Suck on This, has an even more questionable sartorial sense. "He wouldn't wear some pants I got for him because they were too wild," the elder Claypool says. "So I wear 'em."

Claypool is at the center of a group of friends he affectionately calls the Bastards; he's given them all nicknames, like Flapjack and Brain and Flouncer. Claypool himself is nicknamed Snapper – for unprintable reasons – as well as Granddad, "because I'm just a crotchety old bastard and I'm the oldest one in the group." LaLonde is twenty-three, Alexander is twenty-six. "I'm forty-eight," declares Claypool, 28.

Primus's songs are little more than chants ("they're like pirate ditties," says Claypool) laid over teeming, hypnotic riffs that are as fascinating as they are visceral. Although Primus is pegged as a thrash-funk band, there's a lot more to it than that. The band members unashamedly cite Rush as an influence, and the music also contains echoes of Public Image Ltd., Stanley Clarke, the Residents and especially King Crimson.

With Faith No More leading the way, San Francisco is the epicenter of the thrash-funk scene. And everybody there seems to know one another. Claypool's good friend Mike Bordin, drummer for Faith No More, was a guest on "Seas of Cheese"; Claypool sang on Faith No More's hit "Epic." And Primus shares a sensibility, show bills and side projects with such up-and-coming Bay Area bands as the Limbomaniacs, Fungo Mungo and Psychefunkapus; Primus has also befriended stylistic compatriots, such as Jane's Addiction, Living Colour and the Red Hot Chili Peppers.

Claypool first met his best friend, Metallica guitarist Kirk Hammett, in high school and auditioned for Metallica after bassist Cliff Burton died. He figures he blew it after he jokingly proposed jamming on an Isley Brothers tune. Metallica was not amused. "I had really short hair then, and I guess that didn't help, either," deadpans Claypool.

The Warfield Crowd is as eclectic as the music, a peculiar blend of skate punks, Deadheads, metalheads, clean-cut college kids and the odd Gothic trendy; they sport jams, dreadlocks, partially shaved heads and the obligatory backward baseball cap.

Scores of moshing kids tumble over the crowd barrier in a human waterfall; like spawning salmon, only the fittest make it to the stage and dive off. A daring few climb the PA stacks and jump into the crowd a good twenty feet below. A decade ago, this bunch would have embraced much mellower music, but in a meaner, rougher nation, even the flower children slam-dance. For some reason, about a dozen shoes get tossed onstage.

Two girls work their way to the lip of the stage. They go berserk after managing to touch Claypool's foot. They are Noelle, 15, and Karen, 17. "I love him so much and I touched him! God!" Noelle raves later.

"He dripped on us!" squeals Karen, who explains the secret of Primus's appeal. "It's real life," she says. "We can't relate to M.C. Hammer. 'You can't touch this' – what does that mean? I don't know."

Claypool's lyrics are real life. Cartoonish celebrations of the mundane, his shaggy-dog stories feature characters like C.G. the Mexican, the verbose Harold of the Rocks and even former members of the band. "It's true stories – you go with what you know," says Claypool, which explains the inordinate amount of nautical imagery – there's nothing Claypool would rather do than go fishing. Or eat Corn Chex and get stoned in front of the TV. "He liked to watch TV a lot," says Claypool's mom. "I think that's where he got a lot of his ideas. He'd sit there on his little tiny plastic motorcycle that he had and watch cartoons."

Claypool's blue-collar background is another frequent topic. A former carpenter, he comes from a working-class Bay Area town called El Sobrante, which, as he is fond of pointing out, translates as "the leftovers." "I was raised in the land of Budweiser," he says. His father is a mechanic, and so was his grandfather, but somehow, Lester Claypool was not destined to twiddle wrenches. "I would have blasted out one way or another," he says, his braids trailing from a fading mohawk.

Nothing if not a rugged individualist, Claypool invites fellow misfits on board on the title track of Sailing the Seas of Cheese. When "the cold wind of conformity is nipping at your nose," he whines, "come with us, we'll sail the seas of cheese." The fierce "Sgt. Baker" blasts the army's cookie-cutter mentality, while the eleven-beat meter of "Eleven" is a metaphor for a character who "just can't seem to blend into society." Even the band's odd coupling of thrash, funk and progressive rock is a statement.

"It's always been the potato chip up our ass to do what we want," says Claypool matter-of-factly. Early on, he built a printing press so the band could sell T-shirts at gigs; Primus keeps recording budgets low, so it quickly turns a profit. "We've been self-sufficient for a number of years now," says Claypool. "So it's always been in our nature to have control." Unlike most new bands, the members of Primus produce their own records, shoot their own videos, even design their own album covers.

Claypool saw what happened to San Francisco's once-vibrant world-beat scene – "they all waited around for the major-label deal, and when they got it, they weren't ready for it" – and vowed the same thing wouldn't happen to Primus. So he borrowed $1000 from his dad to press the band's live debut album, Suck on This. On the advice of friends in Faith No More and Metallica, the group sought a one-album contract and released the alternative smash Frizzle Fry on the venerable indie label Caroline Records.

Free agents, the band decided to brave the seas of corporate cheese and sign to a major, Interscope Records (a division of Atlantic). It's been smooth sailing for Primus ever since, but it doesn't seem to have affected Claypool's priorities. "If we sell a shitload of records, yee-hah!" he says. "I'll buy a bigger boat!"