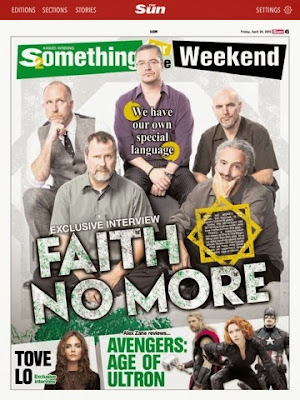 Wow! FAITH NO MORE are more popular now than ever before with every publication clambering for interviews.

"Recently we did a show and we played Epic. We came offstage and we were all just looking at each other, like, 'Do we really have to play that song any more? "It was the same thing with We Care a Lot. It felt a little bit funnier than it did impactful. and kind of nostalgic in not a very good way. But that was maybe just one night. We just did four shows and I enjoyed playing those songs, so its up and downs."

"I felt sure we'd get a handful of people that would come back from the Nineties era. It surprises me how many young people are there, and that's super-flattering. I would never have thought we'd have that sort of draw." 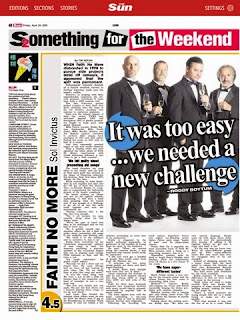 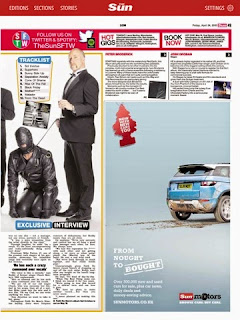 What was Mike Patton doing while the rest of the band was getting together and writing music? He heard a lot of the stuff we were messing with, and he felt good about it. So that encouraged us to carry on with it and finish it up right. He listened to a lot of it, and that determined the songs that ended up on the album.


What were your first impressions of the two singles "Motherfucker" and "Super Hero"?
"Motherfucker" leaped out at us because Roddy brought it to us, and it was fairly complete, except for the drums. I like what Mike sings in the chorus; it makes me laugh. Whenever he says, "motherfucker," it makes me smile because it sounds as if he's smiling when he's saying it. On "Super Hero," there are a lot more layers. It has a lot of energy; it's driving and forceful. To me, that's what Faith No More should sound like.

“We chose the side of creativity over business and it’s great to see that survived over all that time,” he says. “Because it could have gone the other way but it didn’t.”

“We were never a band that was really understood right away. We spent a lot of time making records, and whether it was the label didn’t understand it, the press didn’t understand or the people ... they were all different than the records previously.We didn’t follow a formula. Artistically that was the way for us to go, but what that also meant was that if we wanted to survive making music we had to tour a lot harder and just keep going, and we did.” 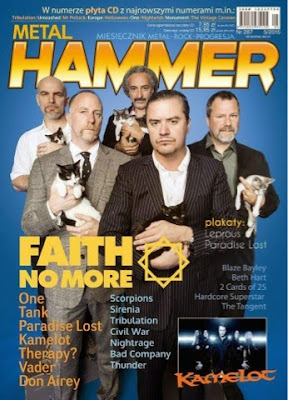 Fast forward to the present. Last week, just before Faith No More embarked on its first North American tour since reuniting in 2009, the band shared a medieval-tinged remix of its new song "Superhero" courtesy of Einstürzende Neubauten bassist Alexander Hacke. Like Spinna’s heady electro remix and FNM bassist Billy Gould’s celestial reworking of songs from the band's final album before breaking up, 1997's Album of the Year, Hacke's interpretation points to avant-garde tendencies that aren’t apparent on "Epic", the smash single off 1989’s The Real Thing and a gift that keeps on giving when it comes to mis-representing Faith No More’s legacy. When Mike Patton replaced Chuck Mosley as FNM’s frontman in 1988, he may have just come from waging "fucked-up psychological terrorism" with Mr. Bungle, but "Epic" nevertheless made it easy to dismiss him as a second-rate Anthony Kiedis knockoff (which, apparently, he was still touchy about long after the fact)—and to view the band as unfortunate funk/rap-metal avatars destined for flash-in-the-pan status.
Thankfully, neither of those things turned out to be true—at least not for long. Faith No More went on to record three adventurous, musically rich albums before breaking up, while Patton immediately proved himself as a creative force to be reckoned with by 1992’s Angel Dust. After Faith No More, he pursued a career of such staggering versatility that it would take this entire column to scratch its surface. Hacke, for example, is one among the scores of cutting-edge artists to release work on Ipecac, the label Patton co-founded with former Alternative Tentacles manager Greg Werckman. Patton’s ravenous appetite for exploration makes you wonder whether he’s been trying to compensate for his flat, nasal rapping on "Epic" ever since. If so, then that song truly is a gift that keeps on giving.


It speaks of ease and confidence to lead with this rather than the obvious – riotous second track ‘Superhero’, all boot-to temple punk-metal, maniacal roaring and thunderously psychedelic outro. Things start to get really interesting with ‘Sunny Side Up’ – part lilting ballad, part punishing assault, with an unsettling, cheerfully acidic refrain.
Propelled by one of Bill Gould’s greatest ever basslines, ‘Separation Anxiety’ is relentless, claustrophobic and disturbing; while ‘Cone of Shame’ shifts from velvety and gothic into churning, swampy noise-rock. ‘Rise of the Fall’ crafts a supremely eccentric patchwork, combining elements of wiry ’80s FNM, jagged riffs, mellow sunshine pop, and the bouncy carnivale of early Mr Bungle.
Familiar to FNM-watchers as the first new track to appear in their comeback gigs, ‘Matador’ was large and lean on stage, but the studio version is just colossal – a multi-part epic, piling on layers of sound, massed vocals and production flourishes to a degree that’s brilliantly, almost absurdly overblown. ‘Black Friday’ and closer ‘From the Dead’, a warm reflection on FNM’s return, both evoke late-’60s Scott Walker, one of many uncharacteristic touchstones that pepper Sol Invictus.