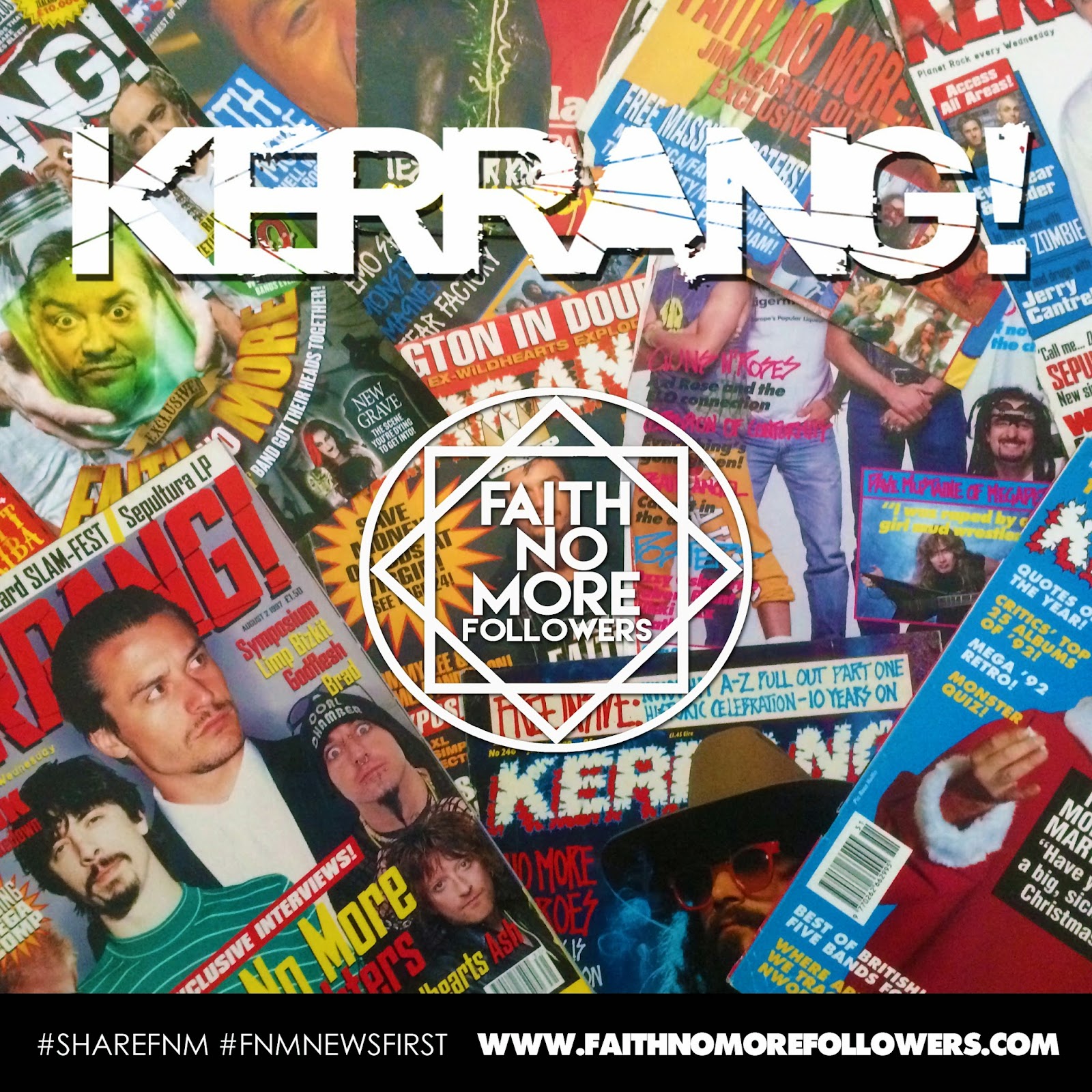 FAITH NO MORE are the cover story of week's issue of KERRANG! magazine (issue number 1564). This will be the 14th time FNM have had this honour.


Kerrang! magazine is a UK based publication that dedicates itself to the most popular and fashionable rock media. In keeping up with current trends it is likely to upset hardcore metal and classic rock fans alike, but they do fall back on their roots and cover the greats occasionally.
The magazine has a history with FNM of posting some of their most honest, humorous and sometimes painful articles written by such names as the legendary FNM jouralist god Steffan Chirazi (big fan), Mike Gitter and Chris Watts. Accompanied by some of the most iconic FNM photographs captured by the ominpresent cameras of Ross Halifn and Mark Leialoha. Of course FNM have adorned many other publication covers along with many more great articles, but Kerrang! has given up the front page spot to them more times than any other magazine.

I have made a point of collecting all these articles to share over time on this page, for now however to celebrate Faith No More's 14th time as Kerrang! cover stars what follows is the full list and a summary of the article inside. These are the dedicated cover stories only, FNM have appeared in the magazine much more often. 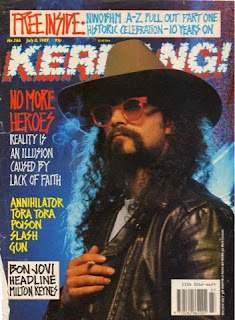 'Who The Hell Are Milli Vanilli'.
Tour antics and interview with the full band.

"I think they're (Milli Vanilli) two of the most beautiful and ugly people I've ever met. Can't sing, can't dance, big hits, pure genius. Two of the whitest black people I have ever seen. No soul, nothing...they can't even say their fucking names." - MIKE PATTON 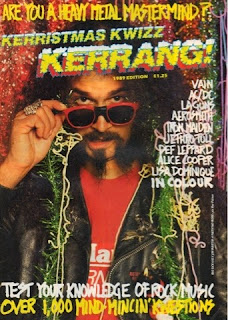 A christmas special quiz edition (not included in the count). 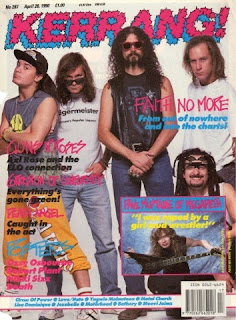 'I Wanna Tell You A Story'. Ho-hum. But listen up, suckers! Are you tired of lifeless, bloodless interviews? Fed up wfth tales of studios and producers, record company and management politics? Do you thirst for tales of organised crime, government corruption and mass murderers? Thought so... Pull up a chair then and make yourself comfortable because FNM bassman Bill Gould has put on his best Mac Bygraves voice to say....


"(FNM's success) has nothing to do with money or power or that side of things, and let's be serious, if I wanted to make money and be on that side I'd be smuggling cocaine because that's where the big money seems to be at" - BILL GOULD 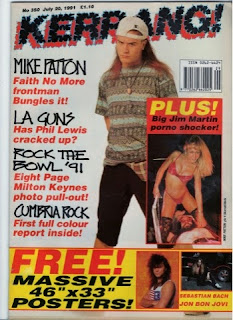 'Bung Ho'.
When you encounter the gaggle of lunatics who make up insane San Francisco Metallers


"We're just like any young American boys, collecting our Easy Riders, our Playboys. By now we all have pretty enormous... collections" - TREY SPRUANCE 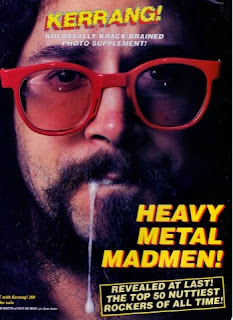 Cover photo | Gene Ambo
A special photo suppliment (not included in the count). 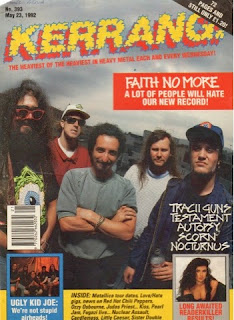 'Sure, We Can Compare Ourselves To Gods'.
Yup, Faith No More are back and Mike Patton's still got his tongue planted firmly in his cheek. Their new LP 'Angel Dust' has ruffled a few feathers at the record company but thankfully, Faith Mo More still don't give a shit. Chris Watts was despatched lo Los Angeles to catch the band shooting a video for their up-coming single 'Midiife Crisis', and uncovered Big Jim Martin and co's welcome return to their MTV-hostile roots...


"Don't you think it's great to see someone twitch? You know, they get really nervous? That happened with our record company. They tried working on each of us individually, persuading us that we didn't know what we were doing. They said it would alienate fans of 'The Real Thing'. Ideally they'd like another 'Epic' on there somewhere." - MIKE PATTON
KERRANG! | ISSUE 410 | 19.09.1992 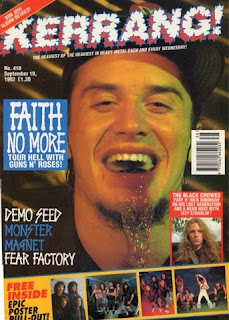 'Testing The Faith'.
It was never gonna be easy playing bottom  of the bill with Guns N Roses and Metallica on a cross-states trek - but for Faith No More it's turned out to be something of a nightmare. Thousand mile bus rides and interband wranglings are jist the tip of the iceberg: but, as CHRIS WATTS asked when he stowed away in their luggage rack, could Jim Martin's rock n' roll excesses be the straw that brakes the camel's back?


"The atmosphere is not really conducive to this band playing well. It's like the Village People syndrome. Showbusiness. Mass entertainment..." - MIKE BORDIN 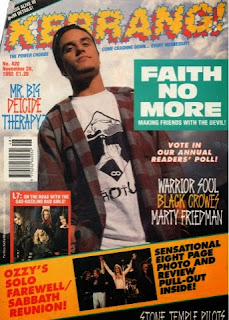 'Making Friends With The Devil'.
That's how Faith No More bassist Bill Gould describes the experience of touring with Guns N' Roses. But despite the band's attempts to "diss" him in the press, Axl Rose was "pretty cool"! Now liberated from the stadium millstone and back in the UK playing theatres, FNM are feelin' much more at home - and actually like each other for the first time in years' Mike Gitter is the man sprinkling a little 'Angel Dust'...


"Don't get me wrong, I'm happy to be doing this. I can't think of anything else I'd rather be doing - digging ditches or going to the office every day. But in my opinion, it's definitely time to do something new, because this last record didn't work out all that great and didn't measure up to what it could have." - BILL GOULD 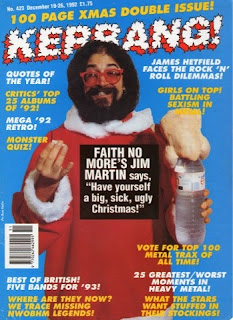 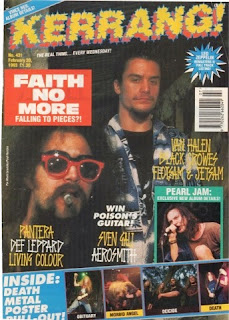 'Dust Storm'.
During the recording of their most recent and critically acclaimed album 'Angel Dust', it became obvious that a rift was growing in the Faith No More camp. While vocalist Mike Patton  was taking an increasingly strong grip on the band's lyrical and musicial direction, guitarist and Metal icon Big Jim Martin was becoming increasingly isolated from his bandmates. 'Angel Dust' survived, but will the rigours of long-term touring and the pressures of preparing for their next LP be the straws that break the camel's back? No one will admit to having the hump, but Steffan Chirazi is determined to probe the problems anyway...


"There's this myth about lyricists and singers, that they're always 'projecting their inner-most secrets', which is horse-shit. Singers are the WORST They can't hide behind instruments..." - MIKE PATTON 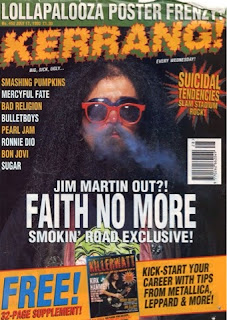 'Midlife Crisis'.
Faith No More have grown up (or so it sez 'ere!) According to bassist Bill Gould they're "children running out of talk". But are they sick 'n' tired of juvenile guitar-slingin' Metal mutha Jim Martin? Is he just misunderstood? Could they survive without

Jim? And who cares anyway? Sugar-loafin' Steffan Chirazi gets to the point! 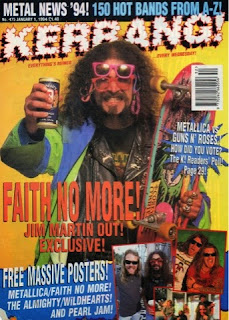 'Jim No More'.
This time it's lor real! The shit has finally hit the fan - Jim Martin is out of Faith No more! In a Kerrang! world exclusive, Steffan Chirazi Faith No More's official biographer, talks to Big Jim and bassist Bill Gould as the split happens!


"Jim should do what he wants to do - and what he's good at. I Think that what we do has nothing to do with what he does..." BILL GOULD 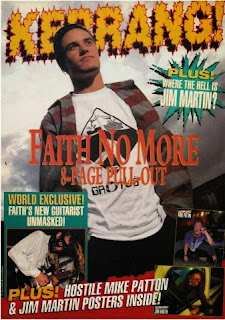 8 page pullout with posters and details on Trey Spruance and Jim Martin's 'Behemoth' (not included in the count.). 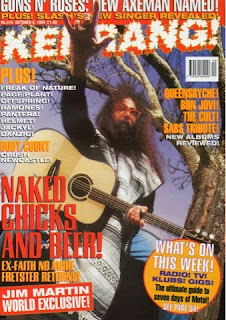 'Cowboy From Hell'.
Beer-guzzlin' man's man Jim Martin is back - one year after Faith No More sacked him! On the axeslinger's California ranch, Steffan Chirazi hears Jim's side of the split - and gets blown away by his brutal new songs! (not included in the count).

"I felt sort of let down. I also thought it wasn't a smart or wise thing to do, but I guess that would go along with my feelings about many other things that Faith No More were doing. There are too many things to talk about. It's like marriage counselling. I disagreed with the way the band communicated with each other and the outside world, and the way they communicated with me." - JIM MARTIN 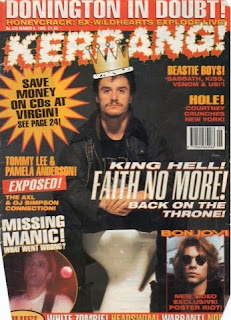 'Royal Flush'.
Will Faith No More's new album 'King For A Day... Fool For A Lifetime' leave 'em flushed with success? Or will they go down the toilet without Jim Martin? Mike Peake gets to the bottom of things!


''The new record is like being hit with a fuckin fist, with one finger sticking out! I think this is a really fuckin' special record. I'm honestly, sincerely, really proud of it. This is the best record we've ever done. But it doesn't just come outta your butt on a plate. The songs, the performance, the recording process, the tones, the mix, the mastering. It's a whole bunch of shit that makes a good album." - MIKE BORDIN
KERRANG! | ISSUE 659 | 02.08.1997 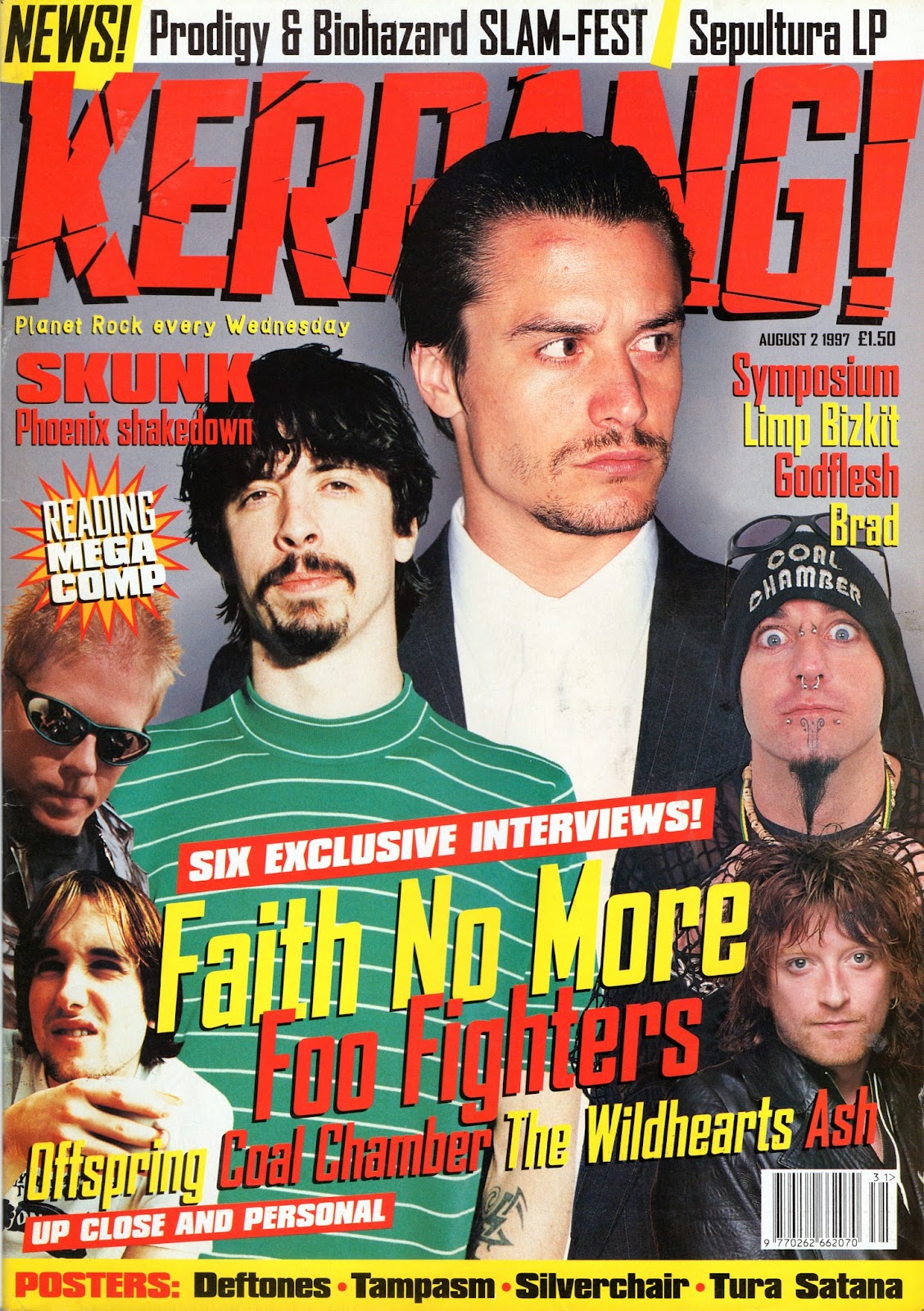 'Men In Black'.
Kind souls that we are, we've decided to stop asking Faith No More about hating each other and shit eating. Instead, we've flown to Poland to talk to them about heroin addiction and homophobia.

"I spend my time off making music. I lock myself in a studio. It doesn't make for a very well-rounded, interesting life, but that's what I do. I have a lot of friends to play with in a lot of different groups. Apart from that, dominoes, cards and my Sony Playstation and good." -MIKE PATTON
(A shared cover article but still in the count) 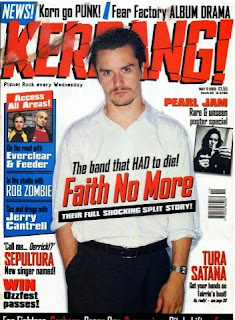 'Ashes To Ashes'.
On April 20, Faith No More announced that they had split up. This is the story - and the last words - of the band who helped to change the face of rock music in the '90s, and nearly killed each other in the process...

"I'd just like to say thanks, man. Thanks to everyone who supported Faith No More. Thanks to everyone in the UK and to everyone at Kerrang!. I really appreciate it, and I know Billy does too. Your support's been amazing over the years. We really couldn't have asked for more. Sorry it had to end this way." - MIKE BORDIN 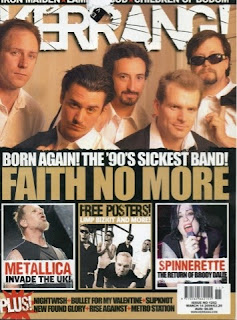 'From Out Of Nowhere'.
After an 11-year split Faith No More are reforming for this year's Download Festival. Here's the story of how the San Franciscan nutjobs became the finest - and most shocking - band of the '90s...

"We can only hope that the experience of playing together again will yield results erratic and unpredictable enough to live up to the legacy of FNM. Who knows where this will end or what it will bring up... Only the future knows. But we are about to find out!"  - FAITH NO MORE 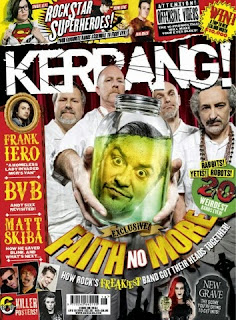 
'Little Chop Of Horrors'.
It might have taken 18 years, yet Faith No More are finally on the eve of releasing their stunning new album, Sol Invictus. But then, rock's freakiest band have never done things by the book. In a UK exclusive, ian Winwood delves into their ever weird and wonderful world.

"I flipped out when i heard the new collection of music, I didn't know what it was going to sound like, and it totally took my head off. I thought, 'Well, I'm gonna at least try to contribute to this.' " - MIKE PATTON