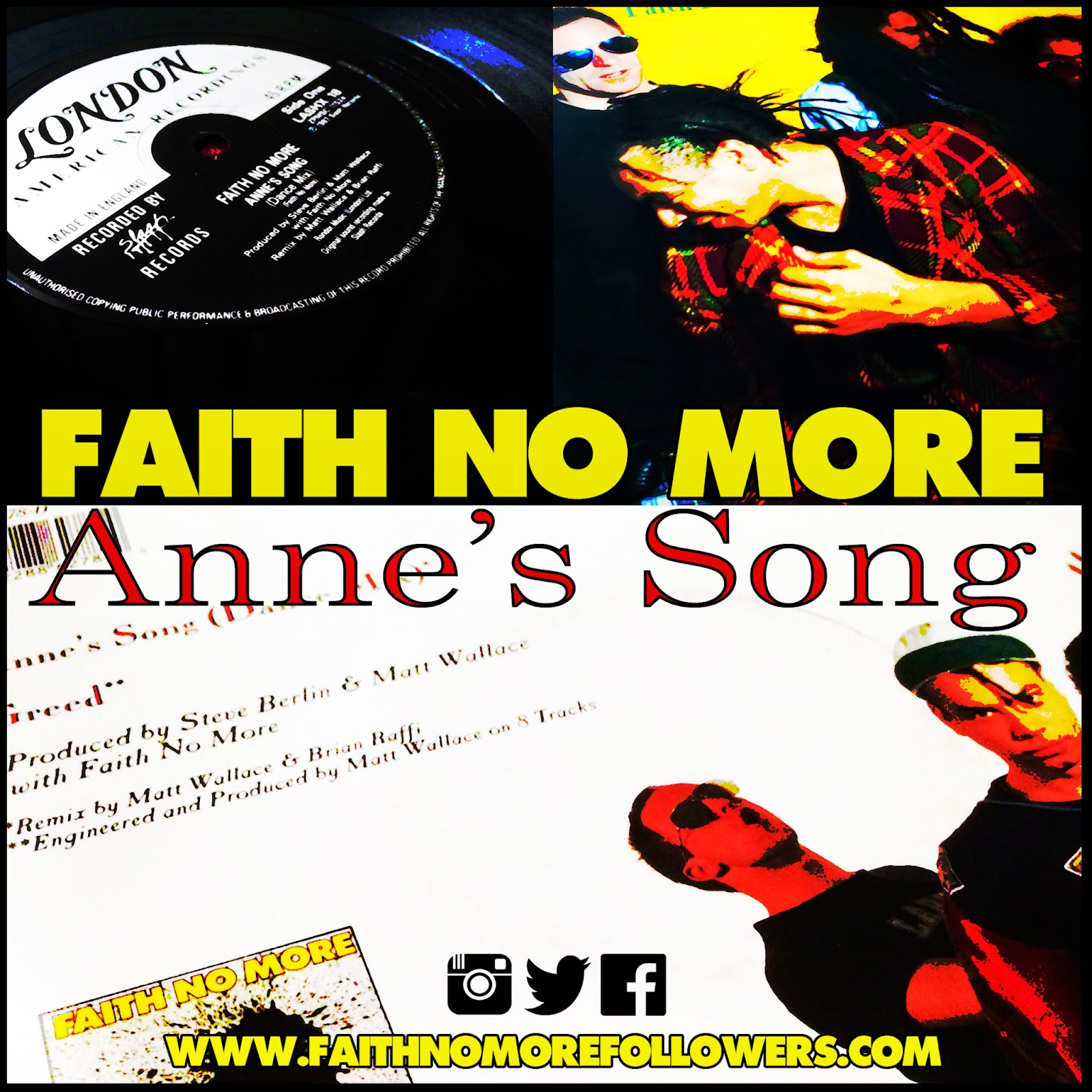 On the 18th of April in 1988 FAITH NO MORE's second single from Introduce Yourself was released. ANNE'S SONG

Here is an updated version of article I wrote for Faith No More Blog in 2013.

'A dancing 12 inches of pure abnormality that rips around the room accompanied by one of the finest voices ever to come out of a broken vocal pipe. It just bludgeons it's way along hitting everything from its path and grinning inanely while doing so. One day all absurdities will be made this way. SingIe of the week, every week. Brilliant.' - SOUNDS 1988

I think you know where I'm going with this by now.

Released in the  on , exactly three months after We Care A lot, it was the second and last single the band released with Chuck Mosley's vocals. Pressed on 12" and 7" with a  yellow vinyl sleeve sporting a cool picture of the band, also on 7" picture disc (a very tasty little collector's item.)

Anne’s Song is fun, funky and full of great rhythms and melodies. Bill Gould's poppy bass groove, like so many other FNM songs takes the lead, while Roddy Bottum's piano melody is graceful and enchanting. The drum track is not dissimilar from We Care A Lot, Mike Bordin accenting the rhythm of Bill's bass riff with his African beats sound tweaked by Matt Wallace's immaculate production. Jim Martin shows off his skill with an elaborately layered solo (so extravagant he needs three hands to play it in the video.) Chuck Mosley's punk-like tones and spoken word perfectly narrate the story that unfolds. The song fades out with a marching beat and a strong melody that sticks in your head. Is it just me or do you blast into the verse of Introduce yourself regardless too?


I used a lot positive adjectives in that description which would suggest there is no reason why the single failed in it's musical structure. In fact it is extremely original and unique amongst the tracks on the album, not really adhering to a traditional ‘verse, chorus’ format, like so many  songs ahead of it’s time.

The lyrics to Anne's Song stand out on Introduce Yourself, written by Chuck and Roddy they tell the story of Anne. They describe her as having a cheerful disposition and a positive outlook on life, someone to turn to for advice, a friend. They go on to describe a party presumably hosted by Anne herself. Brought to life by colourful description and poetic phrases these lyrics are witty and engaging.

'Ann was a friend of Chuck's who lives in the lower east side in NYC. All of the people referenced in that song were part of her 'crew' and are all featured in the black and white sections of the Anne's Song video' - Roddy 2013.

'Anne's song was quite simply, a pep talk that i got from my friend Anne, when I was down in the dumps about not getting along, or seeing eye to eye with my band mates at the time. It's also an introduction to all of our friends and family in , an epiphany about making the best of any situation, and appreciating what you have. I could be wrong, but I think that if I had applied the advice to my situation better at the time, things might have turned out different, but, no regrets, except for the reaction that those particular lyrics spawned at the time, which, unfortunately the details of which, I also have to save for the book, sorry to say...' - Chuck 2013.

If you didn't already know, Chuck is working on an autobiography. So leaving us on cliff hanger there we will have to wait that story then Chuck!

Back in 2013 I also interviewed the subject of the song Anne, who still enthuses over Chuck and FNM and remembers her time hanging out with the band fondly.

Anne's Song was a permanent fixture within ’s live set during Chuck's time in their ranks only to be dropped when Mike Patton took the job of front man.

Despite critical acclaim from publications like NME and Kerrang Faith No More's status remained cult until the release of The Real Thing. After Chuck's departure and the success they found due to the MTV generation, a new group of fans (myself included) discovered their earlier albums and Anne's Song finally got the respect it deserved.

Yeah I'm biased. I am the guy that no matter what, thinks  can do no wrong. Every song is a hit to me (maybe apart from Home Sick Home but that's another story). So I'm using all this evidence to suggest that Anne's Song's lack of commercial success was most likely due to poor promotion and drive from the record company.