FAITH NO MORE played a surprise show at the Troubadour in LA. September 3rd 2015. 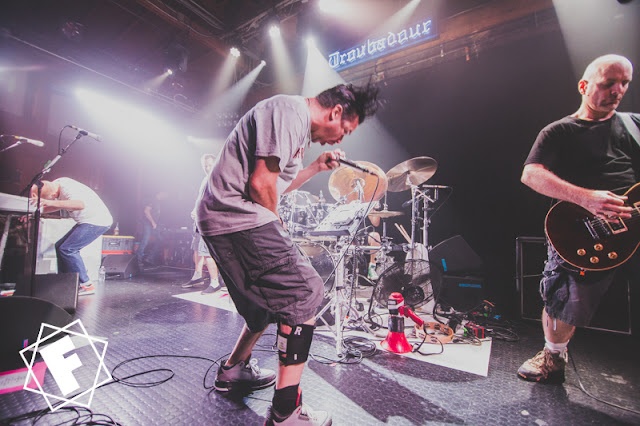 On September 3rd 2015 Faith No More performed an intimate surprise show at the Troubadour in L.A.

"We had a month off before this, so I was scared" - Bill Gould

“How did you guys find out about this show?” inquired Mike Patton of Faith No More who just happened to play the tiny Troubadour on Thursday night. This divided the crowd into Tweeters and non-Tweeters as bassist Billy Gould and keyboardist Roddy Bottum appeared to be big tweeters and said they might have leaked it.
Only diehard fans were in attendance for this special special show as word leaked out on the band’s Facebook page and word of mouth. The band “LUMP” was posted as playing before the official announcement. After an appearance earlier on Jimmy Kimmel, Faith No More played a midnight show for eager and grateful fans. Instead of an opening band (who no one would have wanted to endure) Neil Hamburger dazzled us with his dare-to-go-there humor and his love for Gene Simmons.
As FNM took the stage, it was looking like casual Thursday (according to Bottum) as the guys sported shorts and t-shirts as opposed to looking debonair in their usual suit attire. Patton had a police jacket on that was taken off early and thankfully. There were no beautiful flowers on stage. No gimp! Whaaaa? Just a lot of instruments, sneakers and sweat. The entire band was in good spirits. It was weird for everyone. It was glorious madness. Patton crowd surfed many times and ended up on the bar in the back with, unfortunately, a shot of Jack Daniels. Almost the entire Sol Invictus album was played along with highlight “Be Aggressive” and after a band meeting, ending with “As The Worm Turns.” 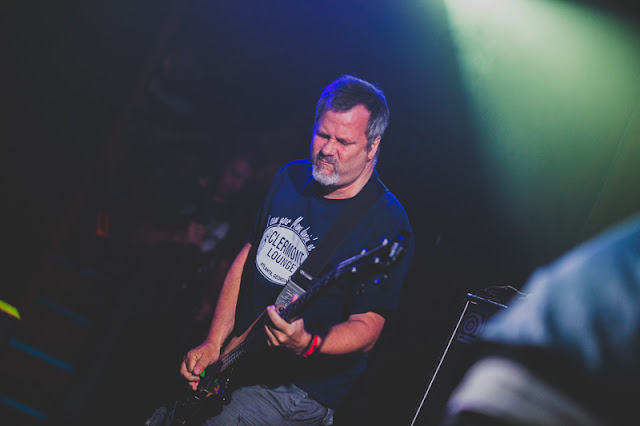 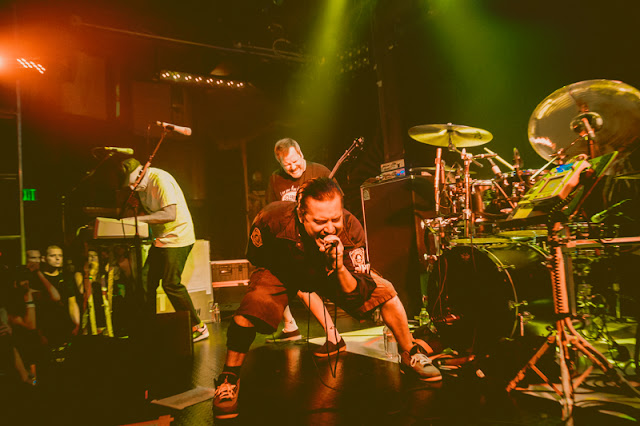 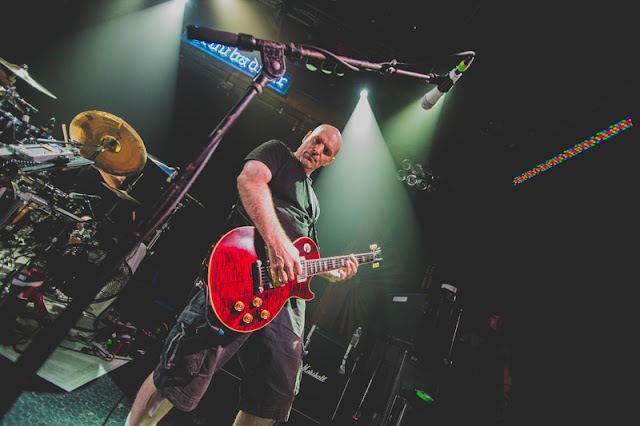 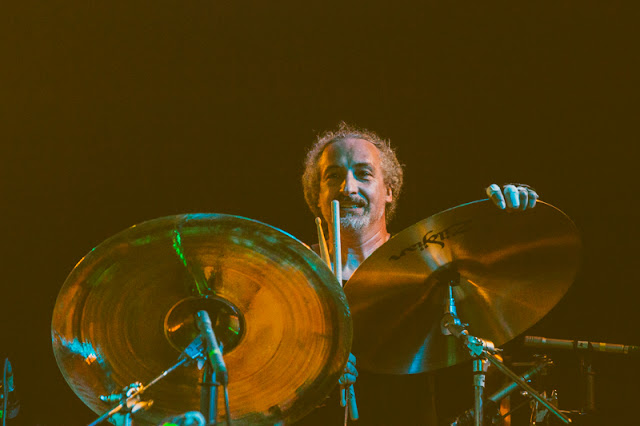 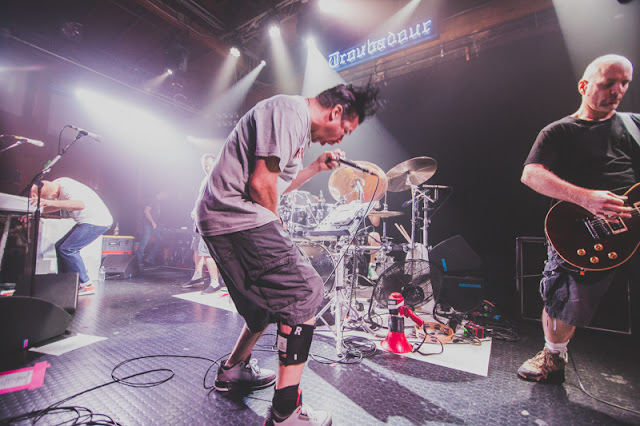 Taylor I’mma let you finish, but Faith No More just had one of the best shows in big-act-playing-in-small-venue history.
Ageless. Timeless. Invictus. Faith No More proved their staying power by getting up close, sweaty and way too personal with 300 fortunate fuckers last night. The band dished out heart attack inducing energy levels, deafening amps, and they played like it was their first and last concert ever. When you watch Faith No More you don’t go back in time, there is no time, they sound just as fresh, fast and fucking flawless as they did when I first saw them in the 90’s in my hometown in Brazil.
During that time, me and some friends were lucky enough to spend an afternoon with Mike Patton and I have to say that after seeing him again 20 years later, his realness, weirdness and complete dedication to musicianship remains the same. Oh, and his oversized cargo shorts and Air Jordans are probably the same too.
Fait No More Troubadour
Roddy Bottum, sporting a Tom of Finland tee alerted the crowd, “This is the first time we play without our stage “uniforms” in 21 years and it feels good.” Casual and relaxed. The band dressed like they were playing a living room gig. But they played like they were in a goddam arena. No room for nostalgia on their set list. The first six songs hit the crowd like a geyser of sound and to my surprise they were all straight off their latest album SOL INVICTUS. “From the Dead”, “Matador” were pretty solid, but their new hit “Motherfucker” really got things going and got Patton plunging off the stage three consecutive times like an angry teenager at a hardcore show. He just kept bouncing back from the crowd to the stage throughout the show, harder and stronger, pretty much his career in a nutshell.
After the obligatory new album sequence and when you thought they were gonna throw in some hits and make it an easy ride for themselves, they kicked it into full gear and performed some of the most interesting, musically challenging songs of their career. “Caffeine”, “Midlife Crisis” and “Ashes to Ashes” were the most impressive of the bunch. And the cherry on top, for me at least, was listening to their graceful non-ironic cover of the Bee Gees’ anthem “I started a Joke”, followed by the classic “We Care a Lot”.
Faith No More Troubadour
On the set list, it said they were going to close with “Epic” and “From out of nowhere”, but by the time they finished “Worm”, the band and pretty much everyone in the room knew that this show, this motherfucking magical moment in time, was already epic enough and they decided to cut it short and cut everyone loose from this dizzying, electrical shock that was this secret show of theirs.
You know, these days there’s a lot of talk of artistry in music or the lack there of and I never once saw Faith No More being mentioned by other artists or in those articles. And I know, they don’t give a rats ass about it, but in all honesty, we should. 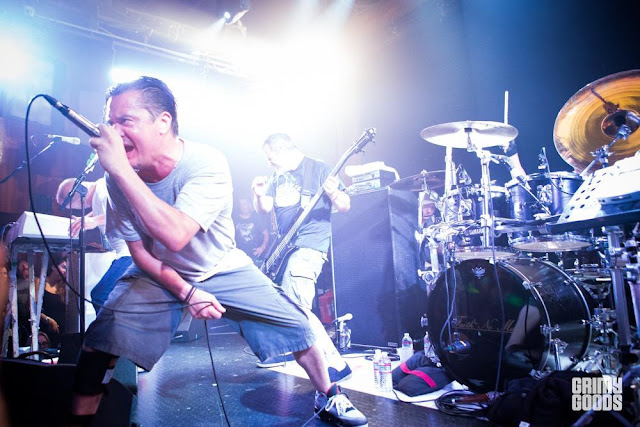 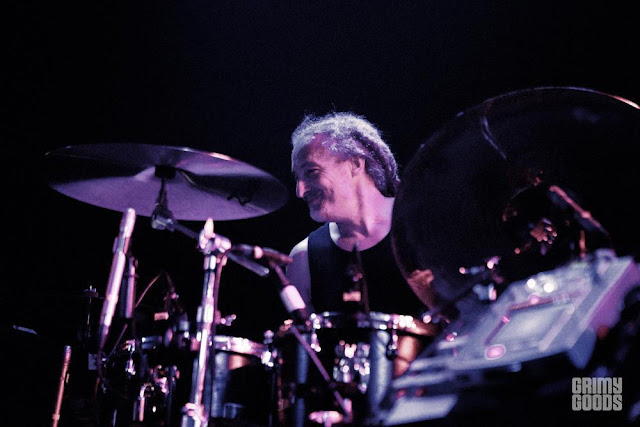 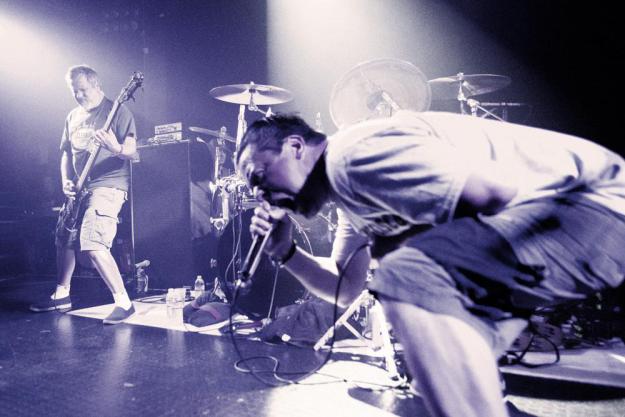