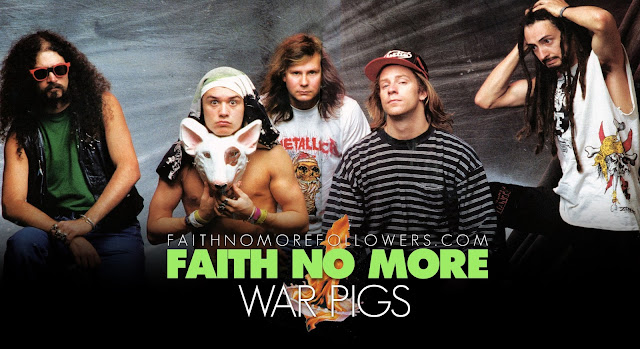 
Nobody can deny Black Sabbath's status as rock legends. Their 40 year career in one guise or another has influenced many musicians and shaped the sound of Metal and Rock music today. Anybody who takes on a cover of one of their songs is brave indeed, not only would they incur the wrath of fans but of Satan too!
Despite this chance of being dragged to hell by the Prince of Darkness himself many artists have taken the risk and added a Sabbath song to their repertoire. In fact there are in fact three full albums dedicated to these songs.
The Nativity In Black series contains thirty seven tracks by various artists, some are glorious tributes to the originals, some not so much. The classic originality of Sabbath, the sinister mood they create and the vocals of Ozzy Osbourne and Ronnie James Dio in particular are always going to be a hard thing to recapture.

On the first album in this series is Faith No More's version of War Pigs (oddly it's Live At Brixton Academy not the studio recording). And of course War Pigs was included on the Cd and cassette versions of the groundbreaking album The Real Thing.


FNM have been playing the song live since the mid 80s when Chuck Mosley was their front man. Chuck, Jim Martin and Mike Bordin have always cited Sabbath as a major influence on their music but as to why they originally chose to cover this particular song Bill explains here:


"We did 'War Pigs' as a cover initially to piss off the punk bands we played with, and we did 'Jump' by Van Halen live to annoy the f* *k out of people. But Jim was starting to feel so proud playing 'War Pigs' that I didn't want to give him that pleasure, so we thought doing 'Easy' would be the perfect antidote. We always liked to do things that we could never imagine ourselves doing because it would open you up to musical possibilities."


We can totally believe the majority of FNM voted WP in to piss people off rather than because they simply loved it! Their rather unconventional approach to their career in music has always been endearing and their unpredictability a reason they are so well respected.

Here let me make it clear I am a massive Sabbath fan, I was brought up sharing a room with my older brother who would play their brooding tones to me against my will until I eventually succumbed and began to smuggle away his cassettes for my Walkman. The whole reason I discovered FNM was due to that fact my brother had acquired a copy of TRT because WP was on the track list. Anyway I now have all Sabbath and Ozzy's albums and appreciate their greatness.

Now that you know this I can make my statement....

FNM's version of WP, in my humble opinion, is BETTER than the original. Bold eh? Well let me alter that a touch, it's an improvement on an already awesome song.

Now I'm not just going to thrust this declaration on you without justification. Let's start with the most obvious reason, Mike Patton's vocals.

Even though he delivers a faultless performance Mike seems to tackle his part with a certain disdain, similar to the way he does in the band's cover of easy by The Commodores, but when I say this it's only that he doesn't approach the song with any imitation of Ozzy. He sings the macabre lyrics with cool groove tones and a hint of sarcasm, not at all how you expect a song of with such a dark and brutal theme to be sung. This twist on the song is more engaging than the original, in fact this approach is nothing short of genius. Patton's addition at the end, of schizophrenic noise, is a real 'pre-Fantomas' moment and puts me in mind of the Live At Brixton version where he momentarily either forgets or can't be bothered with the words and slots in the line 'blurgh blurgh blurgh', demonstrating the possibility that he can't really take the story of witches and wars seriously.


"Most of us weren't really weened on Black Sabbath. Just like two big Black Sabbath devotees, Jim and the drummer Mike. I f* * kin' hate those guys, to tell you the truth. I never really got into 'em. I never even owned one of their albums before I joined this band, and then we went to Warner Brothers and they gave us all these Cd's. I didn't like most of them so I traded them in! I mean I like that song, and I have a couple of the albums and there's some good songs on 'em, but ... I don't know, I Just can't relate to a lot of it."


Now I love Ozzy's voice it is unmistakable but I adore Patton's ( as do you guys or you wouldn't reading this ) and I think this cheeky change of the mood is brilliant. Mike Patton laughing spreads his wings!

The quality of feel and overall sound of the FNM version is due to the production. This is down to the expertise of'fifth FNM member' Matt Wallace who as we know had homed his engineering skills over the last two albums. This overall sound is much more vibrant, thicker and polished. Respectfully the recording technology was more advanced in 1989 than back in 1970, but I think Mattachieved a wonderful sound on the entirety of TRT and getting a great depth of sound is an art in itself, the song TRT being a perfect example of that.
The bpm of the FNM version compared to the original is also a touch quicker which suits the song better with it's long open sections.
This glossy FNM version does however lack the gritty background noise of 70s analogue recordings that brings it's own charm and that present day artists go to great lengths to replicate.

Another thing that makes the FNM version that bit tastier than the original is Billy Gould's bass, even though again I consider Geezer Butler a bit of a legend I think Bill can play a much stronger and fatter baseline. He adds his trademark groove to the performance which lifts the feel and tightens the various sections of the up.

Roddy Bottum too wasn't a 'metal head' like some of the other band members and had this to say on their cover version:


"It was an easy song to do and the kids always love it. Jim and Mike Borden are really into Black Sabbath, but I've never listened to them in my life except for that song. Mike and Jim were little Heavy Metal Monsters. Jim's grown up into a big Heavy Metal Monster."


Mike B and Jim M grew up on Black Sabbath and eventually Puffy spent many years of his career during the 11 year hiatus playing for Ozzy. Although Puffy's style of drumming is born of many different influences including tribal African rhythms, Jazz and Rock there's no denying the nod to Bill Ward's technique.
Mike Bordin 1992....


"One of the bands that I gravitated to was Black Sabbath. Their music wasn't being played on the radio, it wasn't on jukeboxes at the pizzeria you had to go to a friend's house and discover it in the basement. It was an underground thing, which made it more special. It's no joke that Black Sabbath saved my life. I always dreamed of meeting Ozzy and telling him that."


That conversation took place in the late November 1990 at a RIP magazine's 4th birthday party, not only did Ozzy show up, but he jumped on stage to sing War Pigs with the them. Afterwards, Bordin approached Ozzy and nervously introduced himself.
Mike 2015....


"My recollection was that we were starting to get popular with The Real Thing and the videos were on MTV, and I think Ozzy was at home, retired,  watching Perry Mason on morning TV and I think he saw us and heard the sound, and we orbited closer and closer. We did 'War Pigs' on The Real Thing, then he heard that and was intrigued, or confused, and the first time we played the RIP [magazine]  party. He came and sang it [Ozzy jumped up on stage to sing it with the band] and that was the first time we met. Black Sabbath was really important to me as a kid, growing up, I don't want to overstate it, but we sat and talked, and he said, 'You guys are so different, why did you do War Pigs? Are you taking the p**s?' And I said, 'No, Black Sabbath are super-important to my life and I owe a lot if not all of the path I've taken to that early influence and he remembered that."A couple of years later he was coming out of retirement on that Ozzmosis tour and we were just finishing the King For A Day tour and we played shows together in South America, and he remembered we were pretty strong on stage and so he liked what we were doing, we talked a little more. And we were going home and he was just starting, and he called after we went home, a couple of weeks later, and said, 'Do you want to come and play?' and I said yes of course, I'd love to."


Because of this reverence of Sabbath, Puffy's take on the drum track is pretty much identical to Ward's with respectful imitation. Bill Ward like John Bonham brought a certain funkiness to rock music in the 70s that helped them stand apart from some of their counterparts and puffy has the same ability. The only differences are that Puffy's strike of the drum is much harder and his fills more complex, the song offers much room for the FNM drummer to show off his skills.

For the same reasons Big Jim plays the guitar note for note, and as we have read above he would've found great satisfaction in committing a song by his heroes to vinyl (or CD). From his imposing stance to his elaborate solos Big Jim just oozes Metal and his influence from Tommi Iomi is very apparent.
Bill 1990...


"He's a victim of the 70s. He says nothing since then has really interested him that much. He's got pretty far-reaching roots. What made him play guitar was Black Sabbath, and if it wasn't his idea to cover 'War Pigs' on the album, he was probably the happiest when we decided to do it! To the people who were coming to see us at the time, 'War Pigs' was a real clash to our audience."


The faithful drum and guitar tracks are played with the same conviction and monsterous power as the Sabbath version whilst being distinctly Faith No More which enables WP to sit amongst their original songs comfortably. With the influence of Black Sabbath on their lives and careers who better to record the track than Jim and Puffy.

With these things in mind I stand by my original statement and fully believe that the War Pigs of 1989 is a fresher better presented version than the original.