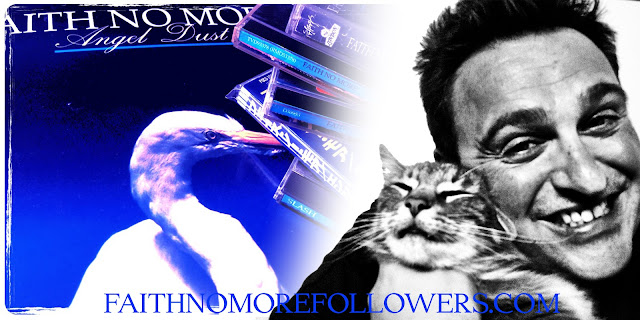 In 2012 to celebrate the 20th anniversary of Angel Dust I spoke to Steffan Chirazi author of FNM 'The Real Story' and he was kind enough to share his thoughts and memories on the album.


…The memories are sharp in one sense and rusty in another. I was absolutely absorbed in everything they were doing, because they were simply the most exciting band around. Everyone tried to slap that shitty "funk metal" label on them, but that was just lazy. Theirs was an aural magic carpet ride; you never quite knew where you were going, but it was visceral, exciting…and they grew, properly grew, between albums.

One of the reasons Angel Dust is such brilliant, important album, is that made sure to avoid the very thing which undoes successful bands; it was it's own. Not a replicate of The Real Thing, not a sequel, an album related only by talent and edge.

It was an album made, as I remember, under the typical duress with which FNM did everything back then, and the tension bands which each of them (in their own ways) stretched to the maximum flex, were as tight and taut as ever before. What beautiful opposites they were, and never was it more clearly heard than on Angel Dust. Take "Midlife Crisis"…beautiful melody, wonderful, haunting keyboard, great bass bobb and then that thick, juicy slab of guitar, always the counter point, always the thing which made beautiful lack of sense. And Matt Wallace was a big part I remember, he really understood what needed to be done to help Angel Dust sound as it should…I spent a fair few nights in a shitty little SF studio watching him and Billy cook it up, help mould and shape it... Much has been said of how much Billy recorded and how much Jim recorded, and the truth is, I never really knew. I remember the bitter, petty arguments about where rehearsals would take place, and I know that ideas ended up being traded by tape much more often than in person. And the thing is, I suspect that no-one was really sure when this "game" of inner-arguing would end. Was it a game? Was it real? Was it just anger built up and spouted via sarcasm? I think so…when you're young, you don't quite have the confidence to sit down and talk out your problems, so they tend to fester in a build-up of silence and sarcasm. I personally always felt that was the case, but in truth, I didn't know, I was simply observing…

PLUS I was friends. Friends with most of the guys, but especially Jim and Billy, I spent a lot of time with each of them. Jim was, and still is, one of my best pals, and Billy and I pretty much clicked on everything. I found the moment when they split with Jim incredibly difficult in the sense of I wanted to stay out of it and not lose either as a friend. To their immense credit, neither ever held anything against me for saying I saw the other's point of view. I remember clearly saying to Jim that whatever the rights and wrongs, the realities were that he was one and they were four, so he would have to either find a way to resolve their differences by accepting a few things he might not have wanted to, or he would likely not be in the band. We saw what happened. I "think" it was for the better with regards to him as a person, but who knows? I loved the music they made together, it was (and remains) so alive, so fresh…

…yeah, lets get back to the MUSIC eh? On Angel Dust. Where to start? A cornucopia of counter-melodies, a sumptuous stew of ingredients which on paper don't make sense, but when cooked by these master chefs was mandible-blowingly delicious…Patton was singing out of his skin (he would later execute some really incredible performances), Puffy was a hooligan as ever, driven by a combination of raw unfiltered tribal talent and some innate inner-nervousness, Billy was the alchemist who laid down the platform and co-created many of the micro-recipies within, and Roddy (as ever) knew how much keyboard dust to sprinkle. Jim? Yeah. I think the guitars are fantastic. "Malpractice" is savage, absolute aural violence, it makes me wanna throw things around the fucking room whenever I hear it (including myself) it's like listening to a moshpit…and then Patton with those twisto vocals! And on the same record, you had "Crack Hitler" with it's funkified megaphone-voxed Huggy Near coolness sliced up by slabs of raw riff. "Jizzlobber"…the heart of darkness, Coppola would've been proud, man, I have to stop, I'm doing a track-by-track and you want to know what it was like.

It was like hearing the greatest album you could imagine. I loved everything about it. I loved the sleeve art (procured via a friend of photographer Mark Leialoha, Werner Krutein, who ran a stock agency along with his own photography) and I loved the slabs of meat on the back. That sleeve was so fucking typical of them, beauty and the raw, visceral beast…and they were fun to be around in many ways. Their anthropology was fascinating, and I still wonder whether that line-up would've made it had they all had a great APPRECIATION of how it's nuances worked to their enormous advantage. They'd get pissed off with me from time to time because I'd refer to how important the tension was in Faith No More…but I know that Angel Dust is testimony to that as fact.

Only now is it being recognized for what it is, one of the most important albums of the last 40 years. And I'll stand behind that sentence, and fight over it, in any fucking coffee shop or bar or club or venue. Because I'm right…as I put the last "full-stop" to this ramble, "Midnight Cowboy" is on my headphones. It's beautiful. Like Faith No More. Like Angel Dust. Even though they might never know it, I will always love them along with this album, and the old romantic in me always wishes that they could make it up with Jim and do a glory ride to bask in what they created together. But life doesn't work like that…at least they made this music…

p.s. "Faster Disco" just came on, and I'm getting a memory shot. I'm not shitting you, my spine just tingled. I guess i forgot how much this band is in my heart…thanks for letting me bleed out a little bit on your pages…