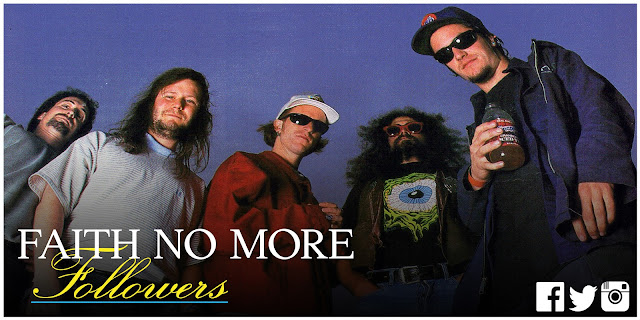 No one can ever accuse Faith No More of playing it safe. During the quinlet's ten-year existence, music styles have come and gone, but Faith's sound remains uncategorizable. Angel Dust, their fourth LP (second with vocalist Mike Patton), pushes rock's—and
Faith's own—boundaries even further than '89's The Real Thing, with splashes of hard rock, dance pop, industrial death metal, and even country. And that's justice  judging by the five songs ("Kindergarten," "Caffeine. "RV," "Malpractice" and "Small Victory") completed at press time! According to keyboardist Roddy Bottum. the rest of the album is just as diverse:
"There's a couple of songs that almost have a pop sort of feel. then there are a couple that are really ultra heavy and loud and kind of abrasive. in your face."
Or as Mike P. puts it, "It's rated G. There's something for each family member on the record."
Although all of the songs on Angel Dust (except the theme to Midnight Cowboy, a cover) were written recently.
"Before it's a song. it goes through many, many life cycles and some of the ideas were generated a long time ago," says Mike.
Generally, the new stuff was written in the traditional FNM way: Roddy, bassist Bill Gould and drummer Mike "Puffy" Bordin came up with musical ideas that were later expanded upon.
"Mike P. was in on it a lot earlier this time, " notes Roddy. New to the band when The Real Thing was recorded, the singer's contributions to that LP were limited.
"I'd never written songs with these guys before," says Mike. "It's alright! You feel each other out and you always reach some kind of understanding." He also composed one song completely on his own ("Malpractice'") as well as all lyrics except those on "Be Aggressive." Cracks Roddy of the latter, "I think we both kind of hated the song to the point where lyrics were needed and he didn't want to write them. so I gave it a go." Then there's the charmingly-titled "JizzLobber." guitarist Jim Martin's main musical donation to the album. 'It's a great song," describes Mike. "A tortured-soul type of thing."
Faith's "country'' tune. "RV." is a definite album stand-out with its boozy keyboards and deep. Southern-fried vocals. "I like that one a lot, agrees Roddy. "It started out as a piano thing I was doing, then Billy and I just started playing around with it and we finished it when we were on tour in Brazil and started playing it live."
"The words are really messed up," says Mike. explaining its theme. "It's the white trash saga: You wake up. you do nothing and you talk a lot of shit .. . and that's what the song does."
One can imagine a middle-aged heavy-set guy singing it. "Oh yeah." agrees Mike. "A lot of the tunes are like character sketches. I don't see anything wrong with that. A lot of people maybe will want to give me shit for that."
A lot of people will assume that these characters are him, as he sings in the
first person. "You have to do it." he believes, "even though it has nothing to do with me. pretty much always. I think it's horrible to write about yourself; I mean. who cares?"
On the more cheerful end of the spectrum, song-wise. are the catchy "Small Victory" and "Land of Sunshine." Mike wrote the latter's lyrics "after staying up for three days and watching self-help programs and reading fortune cookies . . . "it's a totally disgusting, grotesque positive song!"
"I love it, it's real uplifting." says Roddy. "Almost angelic."

Although nothing in particular inspired Mike's lyrics this time. he cites a definite new hero. "When I was up a really long time. I kind of discovered this late night TV evangelist who I really admire now called Robert Tilton. He's quite a guy. You may have seen the
Dallas-based preacher: "He asks you to put your hand on the television set and he'll heal you through the power of TV. using the demon spirit of television to cut off the devil's head . . . We're going to visit his church when we go to Dallas.!" enthuses Mike.
Even though most FNM fans know by now to expect the unexpected. does
Mike think that anything on Angel Dust will really surprise people? "Yeah, I think so." he says. ' I would say 'Surprise! You're Dead' was one of the more extreme things on the last record. There are things on this that are so extreme in the opposite direction that I think they'll freak people out: also stuff in the same direction, but pushed way further. I mean. you can't really put your finger on what's disturbing about it and I think that is what's disturbing about it. so it's a good thing.'"
Angel Dust, like all of Faith's albums. was recorded in the band's hometown of San Francisco and co-produced by Matt Wallace.
"He's been in there since the start.' says Roddy.
"He has a hands-off sort of thing with us and just lets us do what we want. which is really important." Says Mike of Matt. "Since he's worked with us before he's just as much a candidate for torture as the rest of us and that's a comforting thing."
He describes this recent recording process as "a little more trying" than the last album "just because of the mental torment we inflict upon each other: we like to split up into little fractions and try and destroy the other fractions. Like four fifths versus one fifth. but the good thing is we can all be five fifths when we're fighting the record company."
Record company battles aren't something Faith No More are used to., as they've always done their own thing relatively hassle-free. This time however, no doubt due to the success of The Real Thing, it was a little different. Mike explains. "They left us alone for the whole recording and then when we were just about to come to mix, there was suddenly this concern that they didn't know how to market it. They didn't really understand it and who did we think we were making a record like this!" Continues Mike, obviously still bothered by the experience. "Basically, it's a cheap tactic to try and get you worried and feeling
insecure about your own work, to have to justify your work to them. You shouldn't have to do that but by the same token, you have to work with these people because they sell your records, so they have to understand at least a smidgeon of what you're doing."
Recalls Roddy. "They flipped and got a little paranoid. I think they wanted it to sound a lot more like our last record."
Eventually, fears were allayed and problems got worked out. Roddy: "Judging from the way the last record went. I think they realized back then that we were best left alone and we kind of proved that. It just goes to show that if we just do what we think is right on this one, the same sort of thing will happen. hopefully."
The band is currently in the midst of a seven-week European tour with Guns N' Roses and Soundgarden that includes Czechoslovakia, Hungary and Spain, countries Faith have never
played before. In July. they begin touring the States, but no dates had yet been set at press time. They're prepared to be on the road a long time, maybe even as long as they toured in support of The Real Thing. Because Faith had already been on the road a solid year before that album started climbing the charts, they wound up touring for almost two years.
"If we have to do it again, we will." laughs Mike. "We kind of set a precedent for ourselves."
Faith No More have always set precedents, not only for themselves, but for rock music in general (though they'd modestly be the first to deny it). By remaining true to theirselves and refusing to play it safe with Angel Dust, they're keeping the world safe for other adventurous outfits. Not that it's something the band plotted, they just don't know how to do it any other way.
Getting into writing mode for this album was a little tough, according to Roddy. '"We hadn't been at it for a long time, we'd been on tour for so long that writing seemed like a
farfetched thing, almost. It was hard to pin ourselves down and start, but once we did it gut pretty easy." He's definitely pleased with Mike's lyrics: "They're really clever
this time around, just because he did have a lot more time. The lyrics are good, I'm really happy with them."

Mike says the Angel Dust LP title "goes really good with the cover because the cover's really serene and sappy, 101 Strings: It's a big swan or heron with this blue background, contemplative and sentimental and with those two words below it, it makes sense."

Things got a bit hectic for the band when it got down to the wire during mixing, as Mike Patton had to leave for his tour with Mr. Bungle. "He was here for the first week and a half, and then he went on tour, so we Federai Expressed him stuff to listen to," Roddy explained. "We were able to cover a lot of it before he left; We kind of chose songs he was really concerned about and paid attention to those first and foremost."

FNM recorded 18 songs in the studio, which took longer than anticipated. Roddy: "When we were going in we thought we had maybe 12; but then a lot happened, we remembered a lot of other stuff."
This included the "Midnight Cowboy" and "I'm Easy" covers, and a re-recording of an old song, "As the Worm Turns." The latter two will be b-sides.
Labels: 1992 Angel Dust Circus Magazine Faith no more mike patton Roddy Bottum