SOL INVICTUS | Sum It All Up In A Sentence 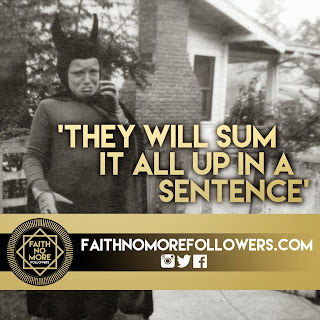 So most of the world has now had a chance to listen and re-listen to the new FAITH NO MORE album.

There have been over 1000 reviews so far on line and in publications including our own. We are now giving you guys the opportunity to have your say. Can you describe 'Sol Invictus' in just one sentence? Please post your one sentence review in the comments here, on our Facebook or Twitter page. We pick a select few and create a full page advert similar to the one below. 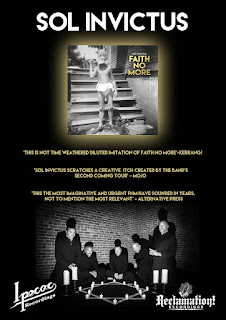 Here are some examples from the press so far.


'This is not a time-weathered, diluted imitation of Faith No More. This, ladies and gents, is still The Real Thing.' - Kerrang!

'Faith No More had nothing to lose by staying on history’s sidelines, for once, but Sol Invictus proves that they belong back in the game.' - Consequence Of Sound
'This is the most imaginative and urgent FNM have sounded in years--not to mention the most relevant.' - Alternative Press
'Sol Invictus is their best and most compelling work since Angel Dust, and the rare reunion album that truly adds to the strength of the group's legacy rather than diluting it.' - All Music Guide 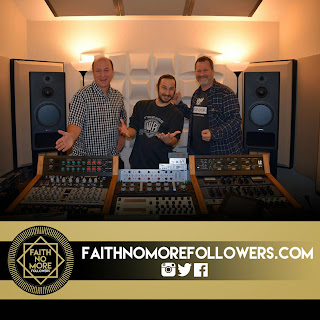 Here are a few great reviews already collected from friends of our page.

'For me, Sol Invictus is that rare and inspiring moment when a band, after years of hard work and experience, doesn't have anything else to prove and is relaxed enough to do their best work.   They are all exceptionally talented but I have to say that Patton has, once again, set the bar very high in terms of lyrics, melody and vibe.' - Matt Wallace

'It doesn't matter what I or anyone thinks about the new album, what matters is that they did it. I know what Bill went through after the break up and what it means to him.' - Espen J. Jorgensen
'The FNM album we were all hoping for' - Joel McIver (Chief Editor Bass Guitar Magazine)

'The hope, the pain, the anger, the revenge... happy that FNM are back!' - Enrico Maniago (Flatbush)

'Sol Invictus is more than I ever hoped for.' - Andy Couch (Caca Volante)

'Sol Invictus is the sound of a band finally at ease with itself but still happy to make listeners ill at ease: it is hard and heavy but stark and sombre; dark and diverse yet optimistic and holistic.' - Adrian Harte (FNM 2.0)

'Sol Invictus proves no fan could be greater rewarded than a Faith No More fan in 2015.' - Gerry LaFerla
'After an excruciating 18 year wait Sol Invictus is an intricate and brutal, jarring and beautifully soaring, gothic, expertly engineered, mastered, and arranged punch-to-the-heart of an album that is representative of the full spectrum of their talents and perfectly Faith No More.' - Nicole Naab

'Sol Invictus is a very unique effort; unlike anything you've heard, and alike any other FNM album it's way ahead of our time.' - Thiago Brandao

'The album you didn't know you wanted Faith No More to make, but are bloody glad they did.' - Matt Thompson

'Like a Phoenix risen from the flames of the past the album has arrived with a new fire and determination that has not been seen since KFAD.' - Frank Quinn

'A teenage love affair I wake up and fall asleep with.' - Alex Pavel

'A collection of stories of non sensical importance that will shape the thoughts of few too many than ought to be.' - Glyn Pickering