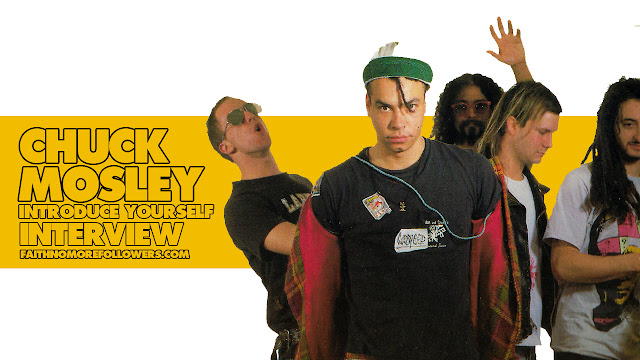 Faith No More's second studio album Introduce Yourself was released in April 1987. This album was a key player in mixing genres and creating something fresh and unique.
It's legacy lives on 30 years later and it influenced whole new generations of music. The music on the record fine tuned FNM's uncategorizable style and solidified the backbone unit of Bill Gould, Roddy Bottum and Mike Bordin. Even though it would be Chuck Mosley's last record with the band he gives the performance of his career which ensured his place in music history.

To celebrate 30 years of this seminal album we had a chat with Chuck.....


Introduce Yourself was released 30 years ago! When was the last time you listened to the record? If recently how does it sound to you now?

Listened to IY last year. Sounds really good. Still not like anything else, not even that 90’s rapping over rock stuff. All of which I do not hate, by the way. I’m afraid I’m a bit too out of touch as far as today’s “radio rock” is concerned. I don’t even know what that is anymore, or if it even exists.

How do remember the recording sessions for the album?

90% normal. The usual with a couple of hiccups that tend to accompany any marriage.


According to The Real Story, Matt Wallace was in your case during the recording of the album. Breathing exercises and jogging! Do you remember this?

HA, HA. No jogging. Maybe some breathing. Everyone was on my case. I was kind of a crabby person at the time. Everyone acted accordingly. When a young band starts to get major attention, money thrown, not at them, but in their direction.

Matt, however, was a true motivator. Yes, I write the majority of my lyrics on the spot. Matt used this and all of my vocal shortcomings in a way that I can’t describe. He understands me and got the best out of me when we did that. Not his skills, only, but his attitude and his approach make him one of my all time favorite producers.


It's hard to believe you wrote lyrics in the studio when there are so many poetic and memorable lines on the album.

Thanks for the compliment. Mostly I write lyrics on the spot. Like I said, they just seem to come out better that way for me, as opposed to writing them out ahead of time. It’s kind of like surfing. I tend to let my phrasing ride the beats and melodies, the words just come out. The ones that I don’t make up. That’s why shit may have a meaning for people who hear it. I usually don’t know what they’re about until much further down the road, save for the occasional spurts of emotion.

The spoken lyrics at the beginning of 'Death March' have become somewhat legendary. Where did they originate? And who is Scott Colbertson?

The “spoken lyrics” you refer to came from the streets of L.A. Let’s just say me and the Southern California Public Transportation System had a hate/hate relationship for quite a few years.
I remember the name Scott C., no offense to him, but I can’t place his name or face or his station in life in relation to mine. Like I said, the 80’s are a blissful, raucous filled, non-stop, hedonistic blur, ha ha…with major heartbreak thrown in for good measure!

The Crab Song is pretty emotional. Could you tell us a little about where they came from?

Like I said, just previously, major heartbreak…sorry man, this one’s just too hot to touch, too personal to approach, and after all this time, the story’s subject is the only one who knows what or who it’s truly about. I’ll tell you personally, next time I see you, perhaps! Besides, that book is still open!

How the fuck do I know? The 80’s are a blur…OG rap, Bowie, punk, OG style post punk, all the same shit I've listened to growing up. Celebrity Skin is the only current band I remember loving at that point! Although packed with fond memories, those years didn’t yield my favorite music.


Are there any songs on the record you are particularly proud of?

All of ‘em! Mostly Crab Song, Chinese Arithmetic, Faster Disco, Death March, Spirit. Like I said, ALL! Some are just more personal than others.


You went on to tour the record with the Red Hot Chili Peppers. (Before Anthony Kiedes had any issues with FNM). Any stories you can share?

I didn’t know Anthony had issues about FNM. I guess, living in Cleveland, I’m somewhat out of the rock gossip group, but, if true, it must be related to an era when I was not in the band, cause we are all cool and I fucking loved Hillel and miss him to this day. But, yeah, I've seen them out here and we were all still good. It’s been a minute, but I've never said or did anything to offend any of them.


If you were to re-write the lyrics to We Care A Lot today what issues would you include?

You mean a 4th version?! ‘Cause I know you know that Vanduls Ugenst Alliderasy did a third version on, “Will Rap Over Hard Rock For Food”, complete with updated lyrics.

If we did a 4th version it would go something like this: Donald trumps a lying, law breaking, tax evading, constitution ignoring, spoiled, sociopathic, psychopathic, misogynistic, lying ass son of a motherfucking useless pile of shit, so unfortunately placed by our sheer stupidity and ignorance, in charge of what I no longer consider, my country, and he’s gonna kill us all, WE CARE A LOT!