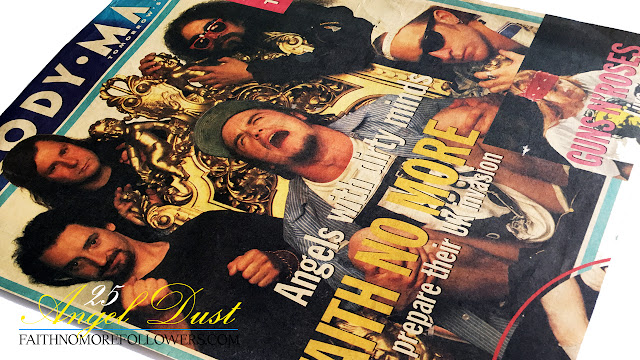 25 years ago Faith No More were the cover story in Melody Maker.

They're mad, bad and dangerous to know, so why are FNM so bloody popular? Andrew Mueller travelled to riot-born LA to discover what the kings of chaos think about MTV, hoax phone calls to stars, GnR support slots and their new album, 'Angel Dust'.

THOSE among you who've never been invited to spend a day out on a pop video shoot may simulate the experience in the comfort and privacy of your own home by iinstalling a partially working pool table in your lounge, removing the vertical hold on your television, laying out insufficient amounts of rancid food on the kitchen table and getting a few friends in to charge about waving clipboards and shouting.
Its the next day, and in a studio lot somewhere in the wilds of Burbank, this is exactly what we're doing in the name of a clip for the album's first single, "Midlife Crisis", a glorious, enormously likeable stomper with a glorious, likeably enormous chorus and Patton' s trademark snarl delivering some terrific lines about menstruating  hearts and the like.
The idea seems to revolve mostly around Faith No More as a re-incarnated Village People (mechanic, commando, hippy, gangster, um, drummer) who stomp around a sandlot hitting things with a shovel. This is all great fun for at least the first nine hours. In off-moments. Faith No More pass the time signing jovial obscenities on Promotional album covers and taking in the series finale of "Beverly Hills 90210". (The dim bulb blond shags the home help while her mum marries the class geek's father and Dylan gets bladdered and has a ruck with Shannon's dad. God, but I'm cruel.)
They also find time to discuss the album and upcoming support spot with Guns N'
Roses with the patient journalist. Patton is quick to warn that he is perhaps not on top form, regarding the imminent and extensive promotional schedule for the new record like most of us look forward to Christmas with the relatives.
"Yeah. I can't decide if I'm not used to it, or if I've just started hating it. Maybe both. Maybe I'm just not really any good at it any more."
Have you done much?
"No," he sighs. "That's the frightening bit."
Patton knows. Faith No More know, with tired certainty, that hacks of every medium from here to Timbuktu are going to want to know why they've made such a wilfully perverse new LP when enormous stardom was apparently there for the taking in the wake of 1989's "The Real Thing" LP and crossover smash single "Epic". The album contains Holy Joy-ish laments ("RV"), children's choruses ("Be Aggressive"), an instrumental, accordion-led John Barry cover ("Midnight Cowboy") all jammed into the band's more familiar and no less fantastic tangled, twisted visions of rock'n'roll. It's a madhouse. It's also rather brilliant.
Given the easy option of picking three adjectives each. Faith No More are as weary as they are deadpan as they are hilarious. All of the following are delivered as if recorded at 45 and played at 33. 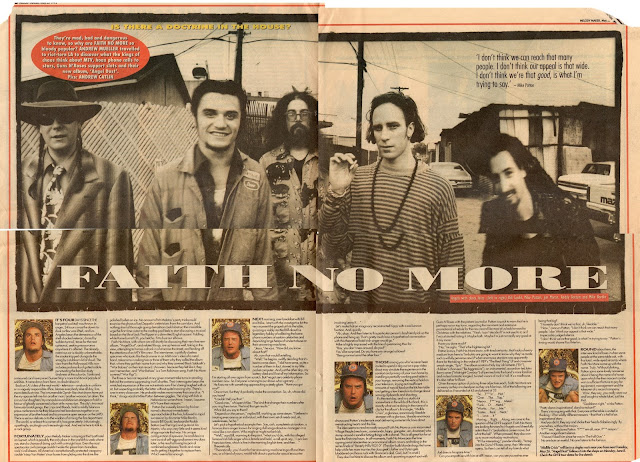