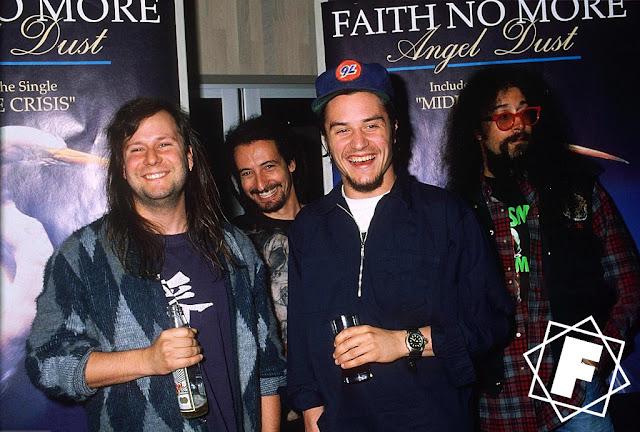 On May 14th 1992 Faith No More held their album release party for Angel Dust in London.
A select crowd of journalists and friends were invited to the (now gone) Marquee Club in London to be the lucky few to hear FNM, under the pseudonym Haircuts That Kill, play songs from their fourth studio album a month before it's release. The band gathered with the press for a release party then performed that night to a packed crowd, a warm-up show for their upcoming stadium tour with Guns 'N Roses. 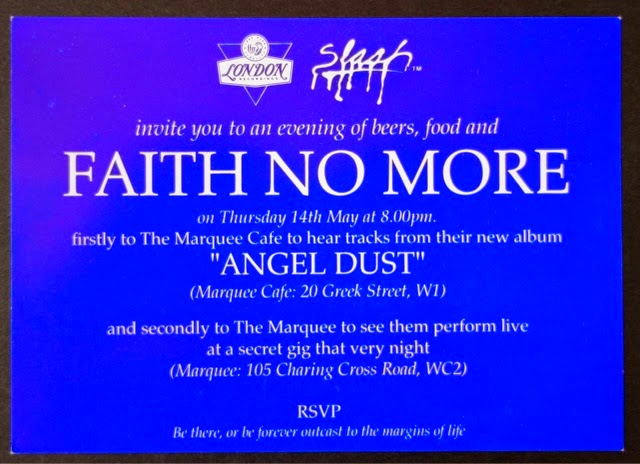 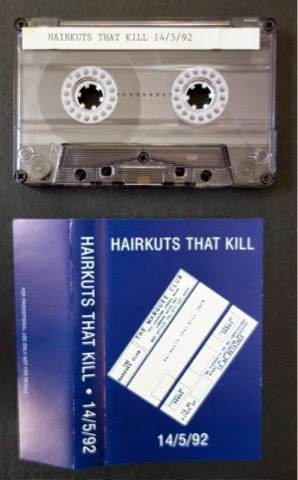 WHAT'S GOT ten legs, a stupid name, was in Europe to support Guns n' Roses and decided to play a secret show in front of around 1,000 hyperventilating lunatics? The answer, of course, is Faith No More. Word had spread like wildfire, and outside the venue tickets were changing hands for up to £48. A sea of disappointed faces formed a barricade outside the doors, forcing  the lucky few with the right credentials to gain admission to fight  their way  through. In typical low-key manner, guitarist Big Sick Ugly Jim Martin appeared in the boozer next door for a pint and to size up the talent. Once inside the heat was unbearable, and if you were less than seven feet tall, you probably only saw the top of vocalist Mike Patton's head, but the music was well worth the suffering. Inevitably, the quintet spent time promoting the crazy new 'Angel Dust' platter, opening with 'Smaller And Smaller' and also playing 'Land Of sunshine' and 'Everything's Ruined'. If new 45 'Midlife Crisis' borrows heavily horn the big hit 'Epic' then it's no great surprise; indeed, as the show transpires it becomes evident that Faith No More have found a comfortable niche. Based around eccentric rhythms, the throbbing bass of Bill Gould and stunning washes of colour from keyboardist Roddy Bottum, FNM strike an easy groove and don't look ,like stopping 'til well after the last underground train has departed. It's a long walk home but it's worth it. Just ask RAW snapper Tony Wooliscroft who, trapped up against the stage among hoardes of other lensmen, doesn't know whether to head bang to the staccato strains of 'We Care A Lot', to do the job he's paid for, or simply to gaze in loving admiration. With 'Angel Dust' still a while away from release, it was songs like 'Surprise! You're Dead!','Edge Of The World' and the instrumental 'Woodpecker From Mars' from 'The Real Thing' that got the best reactions.It was fitting that Gould, Patton and Bottum should all represent in Carcass T-shirts ("We like Carcass, if you don't then fuck you!"), as they whipped up a surprisingly intense wall of noise. By the time we arrived at the barnstorming 'From Out Of Nowhere' and 'Epic', both delivered as encores, Patton had the crowd eating out of his hands. A baffling character with his greased back hair, he tells the crowd he'll see 'em again atWembley Stadium with Gn'R, before telling 'em to "Blow the place up," and adding a subtle dig at the headliners into the bargain. As a colleague remarked afterwards, it'll be a miracle if FNM last more than a few days un the tour when Axl hears about it.

"You guys should be round the corner watching Sepultura. C'mon, what's your excuse?"

Goateed singer Mike Patton, skatepunk bum turned beatnik geek, is having an on/off Yugoslavian type war with the stage-divers. They come in droves, thrusting themselves past him and into the sweat box moshpit in elegant tumbles and feet-first stumbles. Adopting a wishful moniker for a pre-Guns N'Roses stadium tour support warm-up, Faith No More are back in their natural habitat and the divers' bastard choreography adds the right touch. This is a group whose wayward spirit hasn't been settled by success and who are still capable of turning tables and remoulding the basest of Metal component parts.

The Faith That Kills goad and taunt their audience, telling them: one, to pull a fire alarm or call a bomb-scare if they go to see their shows with Axl and Co; (Alex says: any of you who have the bootleg of the band at Wembley that month, maybe this might explain why Patton asks 'How many of you phoned in bomb threats today' at the beginning of The Real Thing?) two, the address of their hotel for an after-show party; and three, that among special guests waiting backstage is a very pissed off Rodney King. In between they unleashed a lacerating, pounding musical blitzkrieg that showed they ascribed to no rules and were headed for the outer limits with renewed fervour.

Their set starts with a sampled heartbeat turned to ear-bleeding volume, steadily increasing, until, by the time this eccentric bunch take the stage, you feel there's some defiantly martial rite being enacted. Haircuts No More take this keynote, run it into their songs and pummel, scour and batter it to death throughout their set. Central to their modus operandi is drummer Mike Bordin, king hell Teutonic tribal beatmaster, whose exploding heartbeat polyrhythmic thrashing defines the path taken by his cohorts.

Bordin's beat is the detonating force that blows the songs apart, the recurring calamity that holds them together. By turns hysterically funny, queasily obscene, inflamed, scizoid and shocking, Faith No More are the most futuristic, bowdlerising Metal force for the '90s. Fuelled by testosterone madness and showing versatility as a kind of Tom Waits from MTV high school hell, Patton's characterisations get caught in doom and bile-filled terror trips. The guy mightn't be much of a singer (?-Alex), but his vocals capture a well of feeling in a furious stream of high-pitched yells, screams, moand and larynx shrapnel.

They ended with the house lights on, inviting their good friends (FACT) Right Said Fred up onstage. But the Freddies weren't 'In the house' so they lived dangerously by using the none-too-amused skinhead bouncers as stand-in props. The guy they singled out as Michael Bolton wouldn't join them either, despite the memorable protestation ("C'mon Michael, we *know* you got soul").


Then it was time to go home. Patton smiled, waved goodbye; "Goodnight, and remember - smoke crack," he said. And they were gone.

"A LOT of people who bought our last record did so on the strength at 'Epic'," said Faith No More bassist and head manipulator Bill Gould recently. "A lot of little kids, ha ha ha! And i don't think they're going to like this new shit, ha ha!" They laugh a lot, do Faith No More. What at? Well, just look at  the inherent cynicism in the name; there isn't much you can do but laugh nowadays, and Faith No More aren't the crying types. It's easy to forget that they've have been doing this for the  best part of a decade, which is enough time to encounter a lot of anger and bitterness and suspicion, to work yourself into a real mind-set, and then to really get your shit together.

Theory. Sick to the hind teeth of worldwide Blockbuster "The Real Thing", FNM go away to write some proper music, get a little ugly, fuck with each other's minds and make a record that they won't be embarrassed to play to their drug dealers. They want to call it "Crack Hitler" but, after some more fights, settle for 'Angel dust' (a drug, by the way, for people who really want a one-way ticket) because that's bound to still annoy someone. And the practice? All that and so much more.

Billed tonight as 'Haircuts That Kill',  an excuse to kick out some Jams and wind themselves up before the real funny business with Guns N'Roses starts next month, FNM played  lots of old shit, some stunning motten-steel-coated-in-sugar-'n'-honey new stuff, and showed how they undoubtedly have their shit together. The new songs are bigger, better, nastier and shinier. They open with a righteous, impulsive rigid-middle-finger called "Caffeine", and it's at this point that the main transformation within the Faith camp shines out, that of singer Mike Patton. Joining such a band, and at such a formative stage of his life, has clearly twisted him all up , as if there's any it wouldn't  have. The snotty, confused lamb of two years ago is cooler, darker, stronger, with a fresh hard glint in his eyes that he uses to laser the front rows while the cerebral carpet bombing of "The Real Thing" throbs all around him. Mike Patton has grown into one hell of a front man, which in a band of frontmen is no mean feat. Midway, after the red lightning flashes of "Introduce Yourself" and "Surprise! You're Dead!", another new song called "Land Of Sunshine" rises from the ashes, and it is shockingly beautiful. Still  inimitably  weighty and groovy, of course, but with a deftness of delivery and power of soul that makes much of the back catalogue sound like kids' stuff. Which doesn't prepare you at all for the soon-to-be-infamous pairing of the gay anthem "I Swallow", about sucking cock-oh yes, really-and the seedy brilliance of "Crack Hitler", which comes over like a wannabe "Miami Vice" theme tune performed by a bunch of Death Row convicts. Faith No More are a telepathically tight live act-old chestnut "We Care A Lot" still sounds incredible after the 6,000th listen-and whatever games they play off stage are forgotten when drummer Mike Bordin starts hitting things like LAPD's finest, when freak bro guitarist Jim Martin starts laying down the law, when keyboard guru Roddy Bottum begins throwing psycho-shapes like a mad didator. The joy of Faith No More is that they belong nowhere, to no movement, scene, label or geographical youth club. They owe nothing to no one. "We're playing Wembley in June," Bill informs the crowd. "Don't come". "Yeah," nods Patton in agreement, "stay at home and phone in some bomb threats". They encore with "Epic", laughing, and "From Out Of Nowhere", snarling, and then with a drawled "Now piss off" from Jim they're gone.

Imagine it, five million MTV kiddies running around like little piggies, mainlining on aural PCP and whistling songs about sucking dick on their way to school. It's going to be a great summer. Faith No More are untouchable.