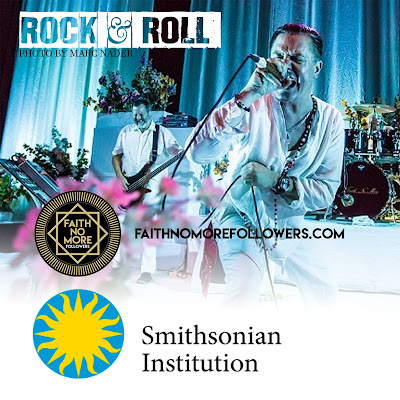 In 2015 we saw thousands of photographs of Faith No More taken by YOU from all over the world.Now is your chance to have them featured in an upcoming book published by Smithsonian.

On December 1st, Smithsonian Books launched rockandroll.si.edu. They have asked the public to go through their attics, basements, boxes, drawers, camera, photo albums, cell phones, and more so that the world can see Rock’n’Roll through the audience’s eyes. There will be a book published in 2017, and they plan to populate it with some of the best pictures from the website.

Smithsonian contacted us after noticing they are seriously lacking on pictures of Faith No More and hope our fan base can help.

Start sending in your rock snapshots now! We know that you’ve got some great rock shots, and we want to see them! Each month the Smithsonian or special guests will choose the best photos that have been submitted.

The site will also feature select photos and text from rock artists, band managers, photographers, and more sharing their favorite photos and stories. The site will launch December 1st, and give the general public the opportunity to post their rock photos and help create one of the greatest collections of rock’n’roll photography ever. The book will be published in the fall of 2017.

Submit your Photos of FNM before December 1st 2016.

For more information check out http://rockandroll.si.edu/ or Smithsonian Books Facebook