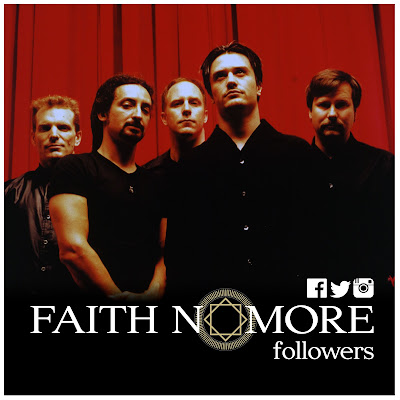 The latest updates from Faith No More and related bands.

Yeah, there were a lot of weird decisions in terms of restructuring the set, and it's also notable that the Live at the Brixton Academy album also has two previously-unreleased tracks tacked onto the end of the proceedings: “The Grade” and “The Cowboy Song,” both recorded during the sessions for The Real Thing. So, no, this isn't a perfect revisiting of the scorching performance of that April night lo these many years ago, but…well, we've got to go back to what we said before: Faith No More kicked some serious ass, and their performance still sounds awesome a quarter of a century later.


The Skinny have posted their interview with Mike Patton, Adam Drucker and Tunde Adebimpe.

Read the full interview HERE.
Nearly a decade under wraps, Mike Patton, Adam Drucker and Tunde Adebimpe emerge as Nevermen this month. In their first full interview, the trio meditate on making music like tapas and driving around in a mega Godzilla.

Patton on the lyrics

Adam wrote 100% of the lyrics on this record… so I should defer to him. But I can say there is a general theme about responsibility and accountability in our line of work. And the consequences involved.

Peeping Tom was my thing, it was very dictatorial in a sense. Nevermen is a different beast, all three of us entered into the adventure with equal input and output. I wanted to work with these dudes ‘cause I respect and love, in a grand sense, what they do. And I felt that a collaboration between the three of us could construct something larger.... hope we achieved that!

This record was recorded in small pieces, ‘tapas’ style if you will, but we all knew that no one was leading, or dragging. Even when you are in a band, those things sort themselves out. This ‘band’ had no such problems or issues. Because we are all used to being assholes and getting the job done. All three of us have experienced ‘leader’ issues in the past. This project is a great way for all of us to step back and let the music lead. By the way, a frontman does not necessarily mean ‘ego-man’, ok?

On future projects this year

A couple of records, a couple of projects, and a film or two… it means a lot to me to remain integrated, whether it translates to the public or not, who knows? Ha!