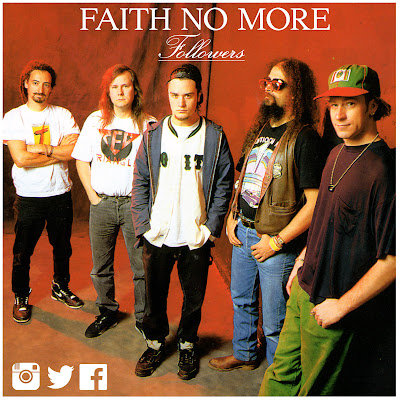 Recording their third studio LP - currently in the mixing stage and titled 'Angel Dust' was always going to be a trying time for FAITH NO MORE. The band thrive on friction and confrontation, guitarist BIG JIM MARTIN doesn't even rehearse with the others, and the whispers of spoilt-brat syndromes get louder. But this is where the FNM creative flow stems from, claims STEFFAN CHIRAZI, who just switched on the tape in front of RODDY BOTTUM, BILLY GOULD and the Big Sick Ugly One, and watched the shit hit the fan

CHAOS IS abundant, voices are raised, people are destroying their apartments in anger and the music is wickedly diverse and loopy. You wouldn't expect it any other way.
"There will be no middle ground for this album," states Bill Gould. "It's either gonna be absolutely huge or it'll be a total f**king flop."
Faith No More are mixing their third studio album, titled 'Angel Dust'. Jim Martin's been in the doghouse since before Christmas, and but for the fact that Faith No More is a democracy, certain ideas would've hit the toilet long ago.
But this turmoil is intrinsic to Faith No More's work. They need to piss each other off to work, and they achieve this in fine fashion. A cheap dive-bar around the comer from San Francisco's Coast Recorders sees myself, Bill Gould, Roddy Bottum and producer Matt Wallace drinking cheap beers and exchanging cheap talk. What's the pressure involved in following up a hugely successful album?
"Everyone's pretty much left us alone," sighs Roddy, "for ourselves more than anybody.The record company were worried about what we were going to do but they kept it from,us."
"Before, we've always stuck together because we were totally broke and we ' needed to put out another album for the money," furthers Gould. "When you take that incentive away you realise there's a chemistry there, because you always get something out of it."

ISN'T THERE pressure to, avoid taking the easy option on record? "We were sick of doing that old style stuff," Could says. "We'd toured it for the last two years so we knew we didn't want that."
Roddy: "We all knew specifically what we wanted to avoid - the whole Funk Metal thing!"
At what point do you stop. caring what people say?
Bill: "About six years ago!"
Do you find yourselves wondering Just how this whole thing took off?
Roddy: "No, touring as long as we did left us with plenty of time to realise how it was happening and why, and to deal with it.
"Everyone was aggravated because it was such a long haul touring, and for the most part we were in pretty bad moods."
Bill: "When it all happened we were more nonchalant because we felt it should've happened a long time ago; it was like, 'F"K... FINALLY!' as opposed to, 'Wow, it's happening so fast'. When you begin touring you imagine what's going to happen. And when things don't happen feel like you're a horse dragging your record company wagon along, and they're beating you with a stick holding a carrot in front of you. But when things finally pay off, at feast you know they were working too."

WHEN YOU  came to putting the material together for this album, you obviously diversified as much as possible.
"I don't know if you can put it like that," says the fired-up Gould. "But this whole Funk Metal thing is really disgusting. The last thing I ever want to be in is a Funk Metal band - we're gonna try to be anything except that!"
People will still want to hear those old songs live though.
"But those are just songs. They're NOT Funk Metal, f**k that! I would say that any band which plays Funk Metal, I hate, and would safely say that most of the band feel the same way."
In the new material, you have songs which sound as if they're from sleazy '70s cop shows and songs that'd strip the flesh off a dog's back, so where's it all coming from? And how much is Mike Patton involved?
"He's involved a lot more , than the last record - he's handling  pretty much all the lyrics and he's into it."
You don't like admitting that friction makes the whole thing work, but you need that tension.
"We go through a major trauma twice a week!" '
What was this week's?
Bill grins."The album cover was one. (The front cover is actually a fantastic shot of a heron in mid-rise on a lake of sorts, at the back a bunch of meat hooks with dead carcasses and a cow's head hanging...)

THERE'S THIS attitude now coming from most of the Seattle bands - they're anti-rock star and don't like being famous. Do you feel like that?
"Luckily I found the Lord Jesus Christ," says Gould sincerely, "and I've put all those drug-type of evils behind me... hahahaha! l discovered the Lord when I saw other bands being more successful than Faith No More!
"No, seriously, being successful is pretty good, I wouldn't know about whether people around me think I've changed or not, because I live in a Chinese neighbourhood where no-one speaks English! When they see me walking down the street they could be talking a lotta shit and I wouldn't know!"
Gould's landlord, however, on hearing that the band were famous rock stars, upped his rent by 30 per cent. "That's true," Gould confirms, "but I'm gonna pour cement down the drains when I leave. Then again, what's a mere 30 per cent after all the millions and millions of dollars I made last year - a cheap price to pay..."
It's Bill's round, I announce unequivocally in reaction to his last comment.

WHEN IT comes to Patton's lyrics, do you get involved? Do you want to know what he's writing about?
"We pretty much leave it to hm," says Roddy. "That's his job in the band. Everyone has .their input and words are his."
Bill: "He's really into his words, and as long as he's into them..."
You don't care.
Roddy: "No, I care what he sings about, but he's probably gonna get a lot of flak this time around. He's gonna offend a lot of people and I think it's great.
"He likes to capture characters in his songs. There's this one song about a white trash trailer park person who's really repulsive. But that's a really good angle to follow. If singers wanna do something like that then they should be able to, in the same way that actors who take on really sleazy roles don't get shit for it..."
Gould: "Like playing a child-molester..."
Roddy: "A singer is the is the same as an actor. People Shouldn't take what singers say so seriously."
But the more it offends, the better it is, right?
"It's just good to stretch things to extremes," affirms Roddy.
What other new songs could be considered as 'stretching' and 'offensive'?
Roddy: "I wrote some good lyrics on one song which Mike'll probably get flak for, it's about swallowing..."
I'm all confused. From any particular angle?
"Probably from down on knees! He'll definitely get flak for that..."

I CHOKE. Roddy might have written those words, but Patton is going to be the one singing them.
"There's a day of reckoning for everyone. It's not even about offending anyone, just about trying out different characters and being challenging."
Gould: "Characters can be offensive to people, but entertainment as a medium can't be wrong or right, only offensive or inoffensive."
This is as strong an illustration of band democracy as you'll ever see - the group totally split on song subject-matter. But how Has that writing come together? Have you found you've been bitching at each other like you always do?
"Jim's getting a lot more comfortable with the songs now," admits Roddy. "He's uncomfortable rehearsing; he'd rather have a tape of the finished product and work on it at home."
Bill: "It makes for a weird tension. He's working on stuff at home but you visualise everything, including the guitar, when you write the song. And then it comes back different to your perception - but if the person isn't there from day one they can't be expected to read your mind."
It seems as if you lot bicker on like grannies at a bus stop!
"It's just another manifestation of the same old story. It'll all work out though..."

JIM MIGHT be a grouchy old man, but it seemed only fitting to allow him his chance to comment. Has it been a pleasant experience, making this album?
"Absolutely not, it's been an unpleasant experience from the very beginning! It's been very unpleasant, but not really much different to my experiences in making records with Faith No More before. It's always been a very unpleasant experience - a lot of people scrambling to get henchmen on their side to play silly games, to blow smoke on a situation.
"It's very difficult to say it all in a short amount of time. There's certain things that certain people worry about at certain times, and certain other people choose to play upon it to increase the tension of a given situation, until everything's way out of hand."

But hasn't that always been the Faith No More way?
"More than ever now."
Is it pressure?
"I'm not sure if it's that or someone else's desire to be a teen idol. Things aren't that much different. At one point there was a problem, because everyone seemed so frightened that I wondered if we'd actually be able to anything! But at this point there's no worries on my part that's all."
How is it that you don't work with the rest of the band when writing and rehearsing (Recording's different, Martin is going in at 10am sharp.)
"Because I have to drive a long way in, and I get there and we'll play something and all of a sudden someone decides they wanna leave! Or somebody decides they're not having a nice day, they decide they wanna blow it off, and I've driven all that way to go there. I'm not too agreeable to begin with, so that stokes the flames up."

WHEN YOU do something different musically, then the bricks come tumbling down?
"That's mostly Bill's fault," Big Jim gumbles. "When somehow somebody gets Bill to think something's wrong I dunno how! - and Bill's the figurehead because he's always willing to say something. So if someone can get Bill going then they've got a good shot at getting their own way.
"I'm not trying to do anything different, I'm just trying to play these songs the way I see 'em, the way it should go. We're not reinventing  ourselves, I'll tell you that, we're just going along as we can. Anything we play will pretty much sound like us, so don't let any of that 'doing something new' bullshit creep in because that's a load of f**king crap!"
Without this pushing and shoving, would Faith No More really cease to exist?
"I guess so... it's the nature of the beast. As long as these people are around that's the way it is. Some people are spoiled filthy little brats, rich parents, been handed everything on a golden platter..."
Careful, Jim, they could just as easily sling the mud back at you! "That's bullshit! Anybody can say anything, anybody can sling shit at anybody they want! What's the point of doing this interview?! Come on! Here it is - guys sometimes act like spoilt children, and this is an industry and a job that encourages and permits that sort of behaviour."


Thank goodness they're hating each other right now through gritted teeth. It's the only way. Faith No More, monkeys trapped in a cage with each other, slinging shit all over the place. 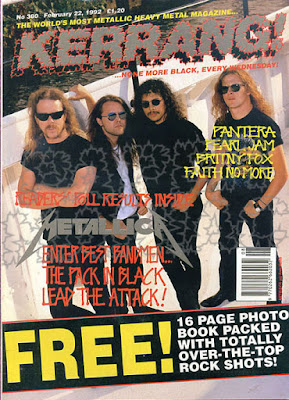