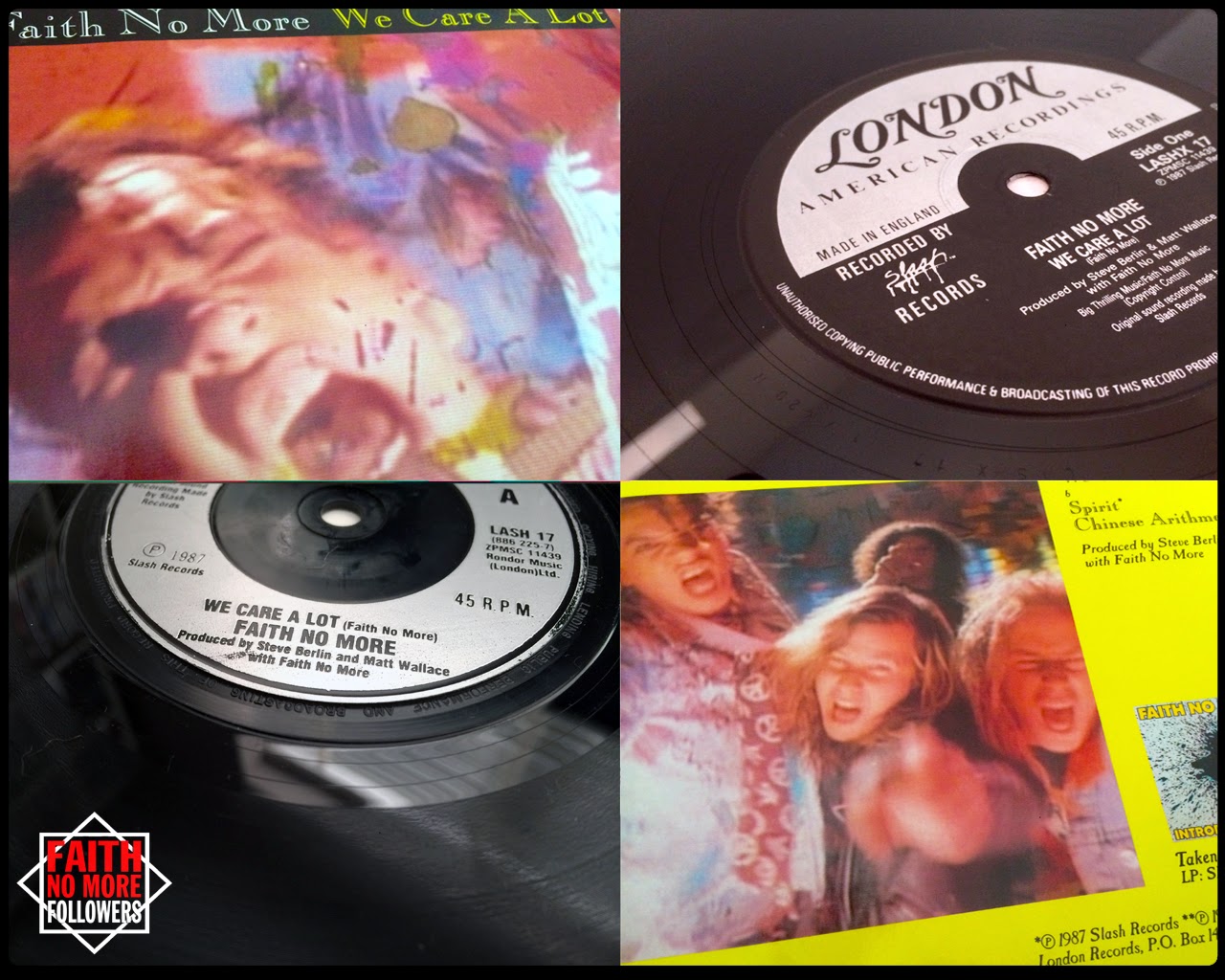 According to 'Q magazine' when writing a rock song that will survive the test of time you need a few key elements: a simple yet powerful chorus, a message the audience can relate to, and a hook you can repeat over and over again.......Although I'm sure Faith No More hadn't read that article when they wrote We Care A Lot but it is living proof of the theory!

The song has been in FNM's set list since 1984, appeared on three of their albums (not including compilations) and they have released it three times as a single.
Jim Martin (1990): ''We Care A Lot' was an accident. We just played the song and everybody liked it'

The song bears all the hallmarks of the early FNM sound. The unmistakable drumbeat resonates like the rhythm of a beating heart. When you listen to the track (whichever rendition) you can vividly picture Mike Bordin's drum rack rattling with the power of his swing. The atmospheric chords of Roddy Bottum's keyboards provide a perfect contrast to the punch of the beat. Bill Gould's bass-line thumps with discipline during the verse, breaking only for the slap and twang of his strings in the pre-chorus. And big sick ugly Jim Martin is at his most brutal with the iconic guitar riff.
The vocals by Chuck Mosley are his usual blunt almost emotionless sounds, an acquired taste that many of us love. The ironic thing about Chuck's tone of voice is that while he's singing 'We Care A Lot' he gives the impression that he couldn't give a fuck.


This was the song that got FNM a management contract and an advance to finance the recording of their first album. As Bill recalls his roommate at the time was playing the demo in the San Francisco branch of Rough Trade Records when Ruth Schwartz heard it and immediately offered to take them on. The band recorded their first album in producer Matt Wallace's garage over three consecutive weekends.

Bill Gould (1993): 'My room mate Will worked at a record store and I got him to slip on the tape to see how people reacted. This lady asked Will what he was playing. That lady was Ruth Swartz and she was starting Mordem. She called me that night and asked if we wanted to put out a record'
That whole funk/rap/metal crossover thing started here, challenging the typical glam American cock rock of the 80s, 'We Care A Lot' was more inline with the US rap scene and  music coming out of Europe. Roddy actually described the song as 'kraftwerk meets Black Sabbath!', and added 'I wrote this song after listening to a whole lot of Run DMC'.

The actual genre for the song listed on Wikipedia is 'Funk Metal', a phrase that wasn't used until a couple of years after it was released. A label which the band themselves disowned. 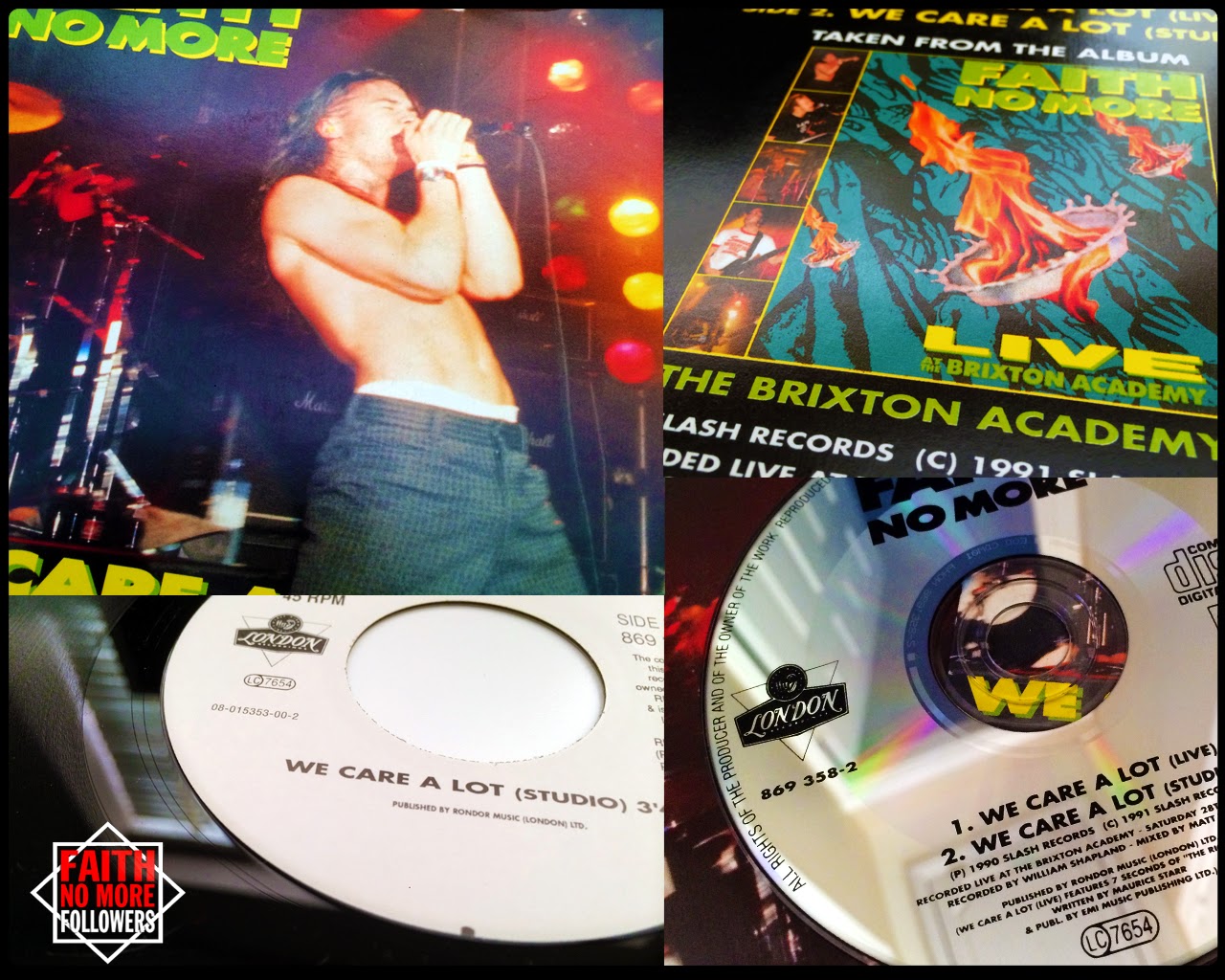 The song was first released in 1985 on the band's debut album of the same name and re-recorded with updated lyrics for the band's second album 'Introduce Yourself' in 1987. It was released as their first single in January 1988 to moderate reception in the U.S. The song later appears on the album 'Live At Brixton' and this live version was again released as a single in 1991 this time with Mike Patton on vocals. The third and final release was in 1998 as a double A side with 'I Started A Joke' taken from 'Who Cares A Lot?' the greatest hits compilation, this was the 1987 studio version.
It  reached number 53 in the Uk singles charts in 1988 and was more recently listed in Pop Matter's 65 Greatest Protest Songs, describing it as a 'smirking account of everything that pop and political culture shoved down our throats at the height of the Reagan revolution'.

The video was FNM's first, and you can tell that any effects of fame hadn't touched them at this point. Their young, happy and enthusiastic performances look rather less polished than even that of the next video 'Anne's Song'. Directed by Bob Biggs and Jay Brown it has no comparison to any rock videos at this point and pays homage to rap culture of the time with lots of bright colours. It also began FNM's reputation for surreal and unexpected imagery in their visual accompaniments. The bouncing baby, flying dog and bizarrely not the last appearance from a transvestite in a FNM video!
'We Care A Lot' is a sarcastic parody of what was going on in music and pop culture at the time. The Live Aid concert and USA's  'Feed the World' song seemed to have irked FNM into creating some kind of statement against the pop singers taking part caring more about their public appearance than the consequences of  poverty itself. The lyrics are in keeping with many by the band at this time and were written by Roddy with Chuck throwing in the odd line here and there.

Chuck Mosley (1988): 'Well, ah Roddy wrote all the things that he cared about and I just wrote the part that says, "it's a dirty job but someone's gotta do it" 'cause I figured that's just the feeling I got. That's the only thing I submitted. That, and the newer lyrics in the updated version.'

Although the band weren't  'out to save the world' exactly, I think FNM lyrics at this time regularly had issue and something they wanted to express. The later lyrics of Mike Patton are much different, he is more of a storyteller creating characters and scenes.
The relevance of the lyrics seem somewhat dated nowadays, not just because of the topics mentioned but because the music industry is much more liberal, instead of lyrics being ironic or having a hidden agenda they can be more direct. But regardless of this I think the message of 'We Care A Lot' is still strong.

Bill Gould: 'We played We Care A Lot as an instrumental for a year before Roddy wrote the lyrics. We got all excited when Chuck sang it because it was the first thing we ever did that sounded like real music.'


25 years after he sang the original Chuck recorded a new version of 'We Care A Lot' for his 2009 album 'Will Rap Over Hard Rock For Food'. Roddy guests on the song and it also features a reference to 'Epic' and possibly Patton with the line,  "We care a lot about the guy who wanted it all but couldn't have it"

Chuck Mosley (2013): 'we care update it wan't a knock on mike patton, but it was a reference to him. i wanted to update the lryics so to be relevent. We did the first version on the first lp, then the 2nd version on introduce yourself, with updated lryics, so, naturally the new version had to have current references, duh, and currently mike patton is the singer of fnm, so i mention him. i only said" little", cause he's younger than me and the phrasing called for a two syllable word. maybe it would get your juices flowing, if it was a "knock" on mike. if i had something to" feel bad about", but i've know him for over twenty years, and he's always been very kool to me, and we have always shared a mutual respect for eachother.....i think. he's a great singer. i sing ok, but, i'm unique, and original, and i write awesome lryics. but i'm glad you noticed, that's very observant. Can you tell me where else did i reference him, or his lryics? I'll give you a hint......oh, no I wont.....'


Chuck Mosley (2009): 'So my bands doing a remake of We Care A Lot with new lyrics poking fun at bands who've hopped aboard that rap/rock bandwagon. I figure that I started the whole thing so it's right that I should end it too.'

I'm a great fan of Chuck and the raw pre-Patton sound of the band but respectively 'We Care A Lot' isn't really one of my personal favourite songs from this era, I think 'Chinese Arithmetic', 'Faster Disco' and 'As the Worm Turns' are far superior.
It was interesting for me to hear 'We Care A Lot' and the two early albums in 1990, after having already developed a love for Patton's voice and 'The Real Thing'. I did, and still do, listen to them as two different bands and I think the two singers voices are so different the sound of the band as a whole changes a great deal. The way Patton sings the song live also seems to loose some of it's original impact and conviction but adds to it with more rhythm and melody.

The reason I decided to write this appraisal of 'We Care A Lot' is because it is a staple song in the band's set and still stands as a great tune after all these years.  It was the first FNM song that grabbed the public and music industry's attention,  and the first FNM song that highlighted the unique style, raw talent and the sarcastic sense if humour of the band. Which makes it an important part of Faith No More history... 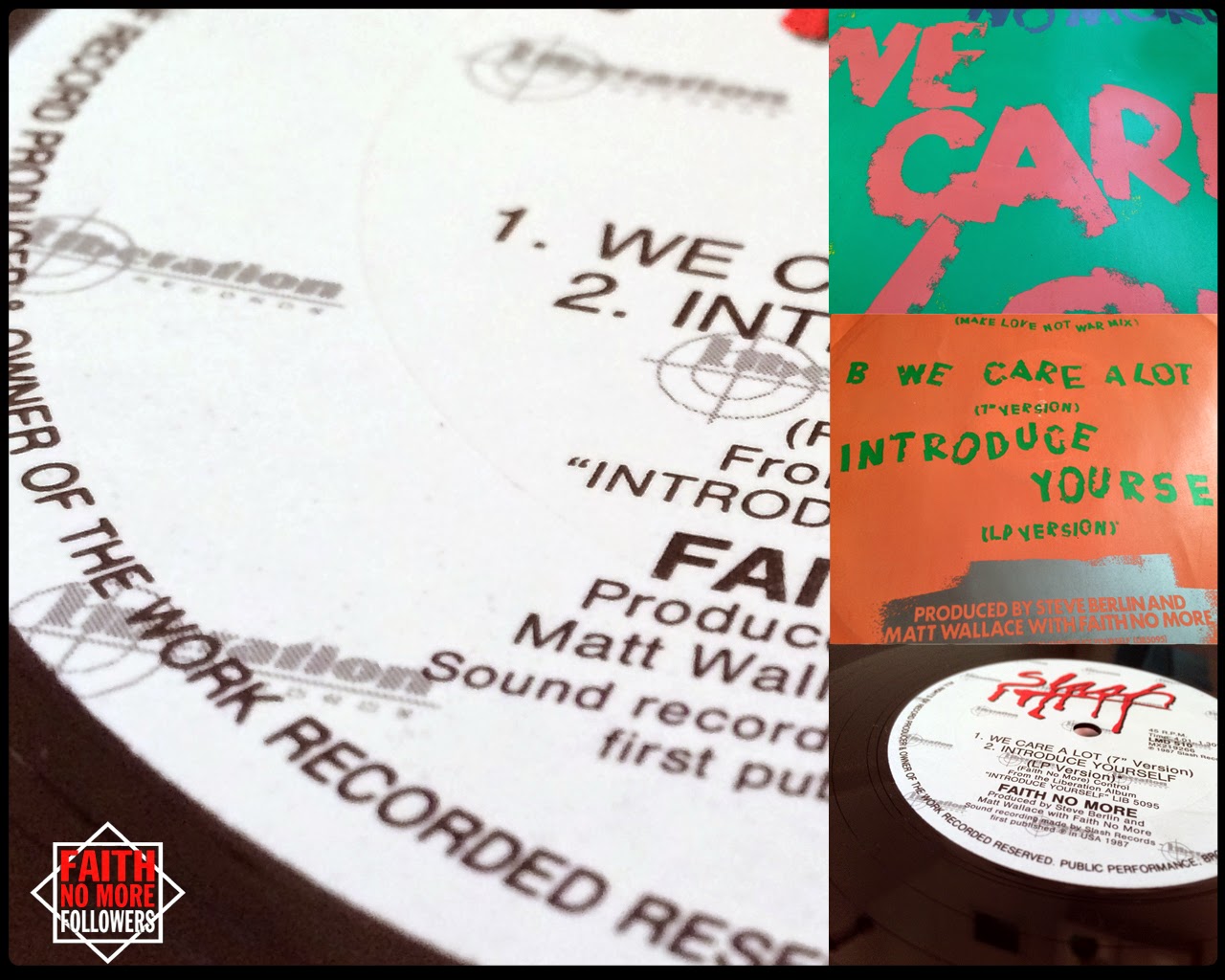 This article was originally posted on Faith No More blog, by myself but is updated here.
Labels: #FNMF Bill Gould Chuck Mosley Faith no more Matt Wallace Ruth Schwartz We Care A lot