Introduce Yourself | The Mike Patton Version 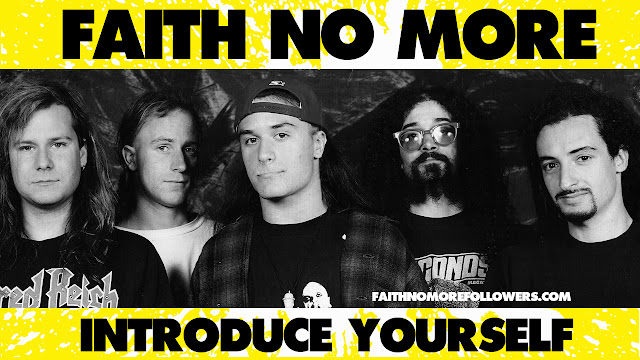 What if Mike Patton had sung on Introduce Yourself.

Faith No More's second studio album celebrates its 30th anniversary this month. We have a selection of interesting articles and interviews to share with you.

However as a fan of Chuck and of Mike Patton one can be forgiven for being curious as to how the recording of IY would've sounded with Patton on vocals. (Likewise how The Real Thing would've turned out with Chuck still at the helm. An future article.)

When Introduce Yourself was released Patton was happily studying, working in a local record store and gigging small venues around California with Mr. Bungle. He had attended a FNM show in 1986, that historic show at Humbolt University when Trey Spruance handed the band a copy of Raging Wrath Of The Easter Bunny.
But what if here we were to rewrite the history books and the fracture between Chuck and FNM had happened soon after the band recorded the record We Care A Lot?
Simply as an experiment, and in no detriment to the outstanding achievements of IY, let's imagine Patton had found his place as FNM's frontman two years earlier and recorded IY with the band.

** In reality it's unlikely Patton would taken the job at 18 years old. He was reluctant to join FNM at 20 and struggled to cope with the pressures of fame. **

Like The Real Thing, we could assume the music would most likely be complete and not differ from the classic sounds we hear on the album. Let us rule out any influence Patton would have on the music itself and concentrate on the vocals.

Patton's strengths as a singer and songwriter would no doubt have led to more defined melodies and rhythms. Certain songs would most definitely have had a more addictive chorus lines. However without Chuck the album would lose the raw post punk sound which added to its uniqueness in an age of wailing hair metal.
The lyrics would be quite different (with the exception of WCAL which was written mostly by Roddy), Patton has always created characters to express himself rather than voice  direct personal experiences, his subject matter being twisted and often perverse. Whereas Chuck romanced about real life issues; love, hate, life and death. Frequently resulting in dark and emotional moments.
The delivery of the vocals on the record would be worlds apart. Patton's soulful nasal and sarcastic tones of the late 80s are a complete contrast to Chuck's punkish, sombre drones and fits of rage.

Patton's voice is more accessible than Chuck's so it is possible that the album would have been more successful. However the music on Introduce Yourself has overall a more forbidding mood than The Real Thing, much of success of that album is due to radio friendly songs like Epic and Falling To Pieces as well as FNM's change in vocalist.

FNM would of course continue to play songs from IY and WCAL after Chuck's departure and presented with Patton's unique voice they are given new life, sung with the same furious passion he does his own compositions. In fact in many cases these versions were the first time fans had heard them.
The songs Introduce Yourself, and We Care a Lot find themselves regularly in set lists, the latter along side Epic as one of the most often played FNM songs at their shows. The version recorded at Brixton Academy was actually a limited single release in 1991. Patton updates the sound by replacing Chuck's frenzied yells with rap styles.
Chinese Arithmetic is to this day one of the greatest FNM songs ever written, it was a staple track in FNM's live shows during TRT and Angel Dust tours. Patton's added soulful twist on the melody and witty impromptu segments of cover songs (which originated with Chuck) create a version that would happily find a place on TRT. So much so that FNM included a live Patton version as a b-side to Epic.
Death March was performed during TRT and KFAD tours but it was most prominent during 1992's AD tour as the second song in the set.
The Crab Song, another hugely popular FNM song which they have continued to play throughout their career, was dropped in 1997 but resurrected for the Second Coming tour. With light and dark elements, not dissimilar to Zombie Eaters, we can imagine a recorded Patton version would've been fantastic.
FNM stopped playing Spirit in 1988 before Patton's arrival, again to be resurrected for the Second Coming tour. Patton's first recorded performance of the song was at the Hollywood Palladium in 2010.
Blood, R n' R and Faster Disco were rarely played without Chuck, making it into their sets on brief occasions during the early 90s. A recorded version of Faster Disco would have been particularly interesting, the layered melodies would have allowed Patton's voice to resonate.
There is no evidence that Patton has ever sung Anne's Song live, but with the story of Anne being particularly personal to Chuck it seems right that Patton would not take this one on.

Below is a compilation of some of the most relevant recordings we could find of the Introduce Yourself track list, in some cases the only recording.

Enjoy our Mike Patton version of this amazing album.