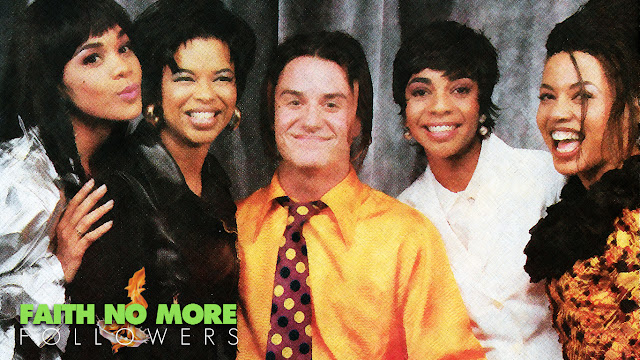 At the 1991 Bammies award ceremony Faith No More cleared up, winning five awards. Here is the arcticle featured in BAM magazine.

It so happens that this year's post-Bammies report coincides with the arrival in San Francisco of some 2,500 retail record people for the National Association of Recording Merchandisers Convention. And actually, this issue ought to be of particular interest to NARM folks since the big winners at this year's ceremony include a cross-section of Bay Area based artists who've already sold a considerable number of CDs, cassettes, and, records (M.C. Hammer, Faith No More, En Vogue,

Digital Underground, Robert Cray Band, Joe Satriani), plus some who promise to make a major impact in the near future.(Primus, Jellyfish, Testament). Actually, a convincing argument could be made that none of the preceding artists have reached their commercial peak (even M.C. Hammer!), which says a lot about the current state of this scene and its promise. That's just talking commercial performance and potential. On an artistic level, I'd argue that Faith No More and Digital Underground are the indisputable great hopes for '90s hard rock and hip-hop, respectively, and a great Top 10 list of critical successes could be put together featuring less commercial Bay Area releases from 1990 (Charles Brown's All My Life, Swell's Swell, Neil Young's Ragged Glory...). But I digress.

Also of interest to NARM visitors will be Caria Hay's CD/Record Store Guide. Included are outlets that have made an impression on those local music fanatics v/ho traipse from store to store in search of the finest and rarest releases. To compile her guide, Carla spent days on the phone cross-checking the responses of just such people, then went backstage at the Bammies (along with a veritable army of photographers) to see what the stars had to say about their favorite record outlets. Where the massive number of local CD/record outlets are concerned, it's impossible to mention all the good ones, but this is a truly thorough survey of the best.

Award shows are frequently a boring joke. But by most accounts, including near unanimous praise in the daily press, the 14th Annual Bay Area Music

Awards, held March 2 at the San Francisco Civic Auditorium, were a huge success on all levels; Fans, music industry people, and celebrities all gathered for a night of madness, inspiration, amusement, and of course, music. Unlike other award ceremonies where only music industry insiders determine who wins, the Bammies Awards are a direct result of BAM readers casting their ballots.

No one was really surprised when Faith No More came away as the nights big winners. They received the most nominations and took home five awards in all: Outstanding Group, Outstanding Song, Outstanding Male Vocalist, Outstanding Drummer, and Outstanding Keyboardist. There is nothing quite like seeing a hometown band in all its glory, and Faith No More put on a stunningly demented performance, performing "Edge of the World"; the theme from the Nestles Alpine White commercial, which segued wickedly into the thrash anthem "Surprise! You're Dead"; before closing with "Epic," the selection for Song of the Year. It was also something else to see a supposedly formal crowd showing as much enthusiasm as a regular audience at a rock concert. There was no all-star jam at the end of the Bammies this year.

Faith No More was the last act to appear on stage, and quite frankly, it would have been a little difficult to top them. They left the audience appropriately devastated.

When asked if he had any pre-Bammie thoughts, lead singer Mike Patton replied, "Where's the food?"

That was just a sample of the warped humor vibe surrounding Faith No More, whose reaction to winning all those awards ranged from bemused to disbelieving to flattered. But the group never forgot to extend a proper thank-you. "I'd like to thank Satan",  said a suitably humble (and typically facetious) Billy Gould in one acceptance speech. Another memorable

Despite all the acclaim and praise they received that night, it was not lost on the band members how much of a struggle it was to get to where they are now.

A continual theme in their post-award interviews was gratitude to all the people who supported them along the way. As drummer Mike Bordin said, "We still don't see ourselves as a glitzy, politician-type awards band but we know the awards came from the people so that really means a lot to us."

Love 'em or hate 'em, it can't be denied that Faith No More (which, along with Patton, Gould, and Bordin, includes keyboardist Roddy Bottum and guitarist Jim Martín) has shaken up the music industry with its unique, uncompromising music and persona. More Bammie Awards may be in their future. The group plans to begin recording the followup to its breakthrough LP, The Real Thing, at least by the end of 1991. All this is depending, of course, on how Patton will handle the conflicts entailed in being in two very active bands at once. Patton also sings lead for Mr. Bungle, which has just finished recording its debut album, which will be mixed by John Zorn of Naked City fame. 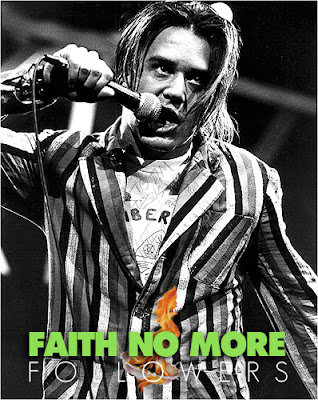 Primus has also been keeping a very busy schedule lately. The quirky East Bay trio performed and won three awards at the Bammies: Club Band of the Year, Outstanding Independent Album, and Outstanding Bassist. Les Claypool, Primus' lead singer and bass player, said that the only thing going through his mind when he went up to get the awards was, "I hope I don't trip. This is going to be on TV." He also took the opportunity to praise competing bassist Rob Wasserman. Primus has just completed a new album, called Sailing the Seas of Cheese, its first release on the Interscope label. Considering that if s strongly established itself in the Bay Area, Primus seems poised for even greater success, though drummer Tim "Herb" Alexander dismissed the notion that they'd become MTV monsters. Look for the band's appealing eccentricity to remain intact.

M.C. Hammer (Musician of the Year and winner of Outstanding Album for Please Hammer Don't Hurt Em) was the most talked-about no-show. (He was in Canada.) But if it wasn't Hammer Time, it certainly was Humpty Time. Humpty (Shock G or whatever you wish to call him) was all over the place, not only backstage, but also in the lobby, on stage, everywhere  but seated at his table. He and the other members of Digital Underground provided the most outrageous, funniest highlights of the night. Unlike other bands at the Bammies, it seemed like Digital Underground travelled everywhere together. (Though I don't think anyone followed them to the bathroom to make sure.) To the delight of many hip-hop fans, D.U. won the award for Outstanding Urban/Contemporary Album. Try touching THAT.

Further proof that the Bammies aren't just about rewarding commercialism: Jellyfish won the award for Outstanding Debut Album for Belly Button. They seemed a bit humble about being nominated when I spoke with them before the Bammies. Perhaps many people underestimated the strength of their Bay Area supporters, because Jellyfish was considered an underdog in the Debut category. It doesn't really matter what kind of clothes they wear (and some of them are the most colourful I have ever seen). During their rehearsals and on stage at the Bammies, it was quite obvious that talent is the quality for which they will be remembered.

Carlos Santana, who performed with the Caribbean All-Stars, articulated many people's opinions by saying, "In the past, the Bammies should have been called the BAP Awards—the Bay Area Personalities Awards. Now it seems more focused on the music. We're learning." Santana also expressed pride in the Native Americans who appeared at the Bammíes.

This year's show included a roster of diverse artists, both culturally and musically. And considering several of this year's Bammie winners at some point received very little or no mainstream commercial exposure, the Bammies are an indication that Bay Area people are taking a unique interest in their artists and supporting them accordingly. Ex-Journey guitarist Neal Schon (Arthur M. Sohcot Award winner along with musical partner Jonathan Gain) chatted briefly backstage about Ms upcoming projects. "We're cutting the next Bad English album right now, and that's moving along very nicely. I'm also producing two very talented brothers, who used to be in the LA band Brunette. They've recorded a demo and right now we're shopping around for a label."

Out of all the performers at this year's Bammies, Schon was one of the most professional artists at rehearsals. His instrumental performance with keyboardist Cain of "America the Beautiful" was a well received highlight at show time, and was also a startling Counterpoint to the usual album cuts that people played. It was quite fitting, since the end of the war in the Persian Gulf was very much on people's minds.

Also at the Bammies were former Night Ranger guitarists Brad Gillis and Jeff Watson, who are working with Kansas lead singer Steve Walsh on a new project. Outstanding Reed / Brass Player winner Clarence demons, who also performed at the Bammies, reported that he is continuing to write songs for a future album. Craig Chaquico of Jefferson Starship said he's working with a new band, which will reportedly be more rock-oriented than Starship. Brian Wheat and Tommy Skeoch talked about the next Tesla album, which is currently in the works. They are clearly excited about it and mentioned that the tour that will inevitably follow the new release will include some acoustic songs. Their current acoustic project first surfaced at last year's Bammies.

Some of the other notables backstage included Tony! Toni! Tone!; Death Angel; Gary "I'm not a San Francisco DJ but I play one on TV" Cole; Psychefunkapus; hostess Bonnie Hayes; the Outstanding Blues Album Award winner the Robert Cray Band (sans Cray, who was recuperating from jet lag after arriving back in town from Europe); rapper Chill E.B.;

Despite all the excitement of being backstage, the scene behind the curtain was frantic, with volunteers, artists, and reporters rushing back and forth. Gregg Allman, who recently moved to the Bay Area, nearly upstaged Faith No More in terms of attention from the media and fans. At times, Allman seemed overwhelmed, but he generally took it all in stride. In fact, the artists must be commended for being accommodating and, dare I say, polite. The best moments at the Bammies were definitely when, rather than striking poses or playing roles, celebrities were just being people out to have as much fun as possible. Hats off to everyone who showed up, worked behind the scenes, and generally made it possible for the Bammies to be such a success this year. The post-Bammie party at the Hyatt Regency was can be called the event after the event. Most of music the veterans skipped this one, but a slew of younger artists were in attendance, including members of Faith No More, Psychefunkapus, Forbidden, Jellyfish, and Limbomaniacs. Before any impressionable or self-righteous types get bent out of shape over Faith No More's behaviour at the Bammies, please take note that Mike Patton's family was at the party and they did not seem at all embarrassed. Billy Gould, the bass player from FNM, made quite the fashion statement, wearing a bright red baseball cap and what looked like a shaggy green fur coat; at least we know that PETA won't be after him. Gould, who'd suffered the onstage taunts of Patton during FNM's set ("Billy didn't win a Bammie! Billy didn't win a Bammie!"), later climbed onstage to perform "Free Bird." The  party was another crowded affair, of course, but it went just as smoothly as the awards show before it.

No drunken brawls or hyperventilating mob scenes here. It just was the icing on the cake to a very unforgettable night. 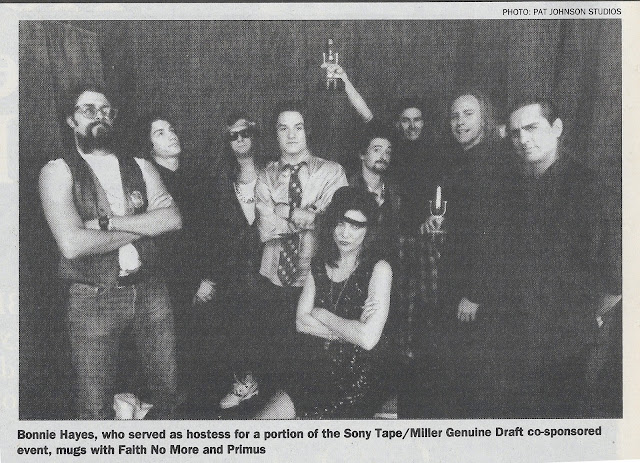 BAY AREA MUSICIAN OF THE YEAR 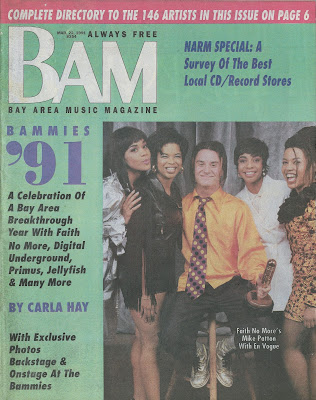