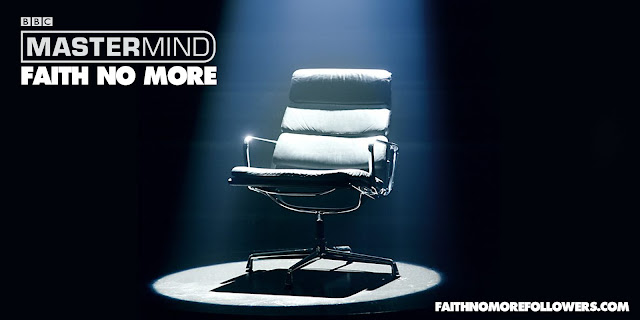 And your chosen subject is......Faith No More.

We joined forces with Faith No More 2.0 to track down Owen Dawson, the man who answered 11 questions on FNM in a minute, passing on one question and missing two.

Did you make it through? That score would win most episodes! When did you apply? When did the recording take place?

I haven’t been told if I made it through to the semi final yet. Here’s hoping! I had to sign some very official looking forms saying I wouldn’t discuss the Mastermind process, so I can’t say too much about the application or the show I’m afraid. I can say that it was recorded in May in the BBC’s Media City complex in Salford. I haven’t actually seen the episode as I am currently in Greece on holiday and can’t access the BBC iplayer to watch it!

Was Faith No More your first choice of subject?

I had to submit three subjects – again, I’m not allowed to be specific, but the other two were more ‘academic.’ I was stumped for a third subject and put down FNM for the sake of completion as much as anything. To my great surprise, the Mastermind people suggested I should do it. Which was fine by me!

How did you prepare?

I had read Stefan Chirazi’s “Faith No More: The Real Story” many years ago, so I re-read it. I also bought Greg Prato’s “The Faith No More and Mr. Bungle Companion” which took things up to around 1999, and of course Allmusic was good for the more technical discography stuff.
As well as the aforementioned sources, I am lucky enough to count David Fox of Valentine Records, Manchester, as my oldest friend. We got into FNM together as youngsters and he set me a fiendishly difficult quiz which I didn’t do too well in. It was useful because I think I had got over confident at that stage, thinking as long as I knew the discography I would find it easy. David’s quiz soon brought me down a peg and forced me to widen my research and not neglect the band’s story in favour of just the music.

How intimidating is it sitting in the chair?

The chair itself is really not intimidating at all. It’s a rather run of the mill, standard office type chair, not the big black imposing interrogation seat that one associates with Mastermind. But the music…when you hear those first few bars of ‘Approaching Menace’ that’s when the nerves start jangling.

What score were you aiming and hoping for in FNM round and overall?

I had no pre-conceived points target for either round. The only target I set myself was not to finish last.

Are FNM your favourite band?

Yes, FNM are without doubt my favourite band and have been for nearly 25 years. I’m a big fan of other bands like Therapy? Nirvana, Queens of the Stone Age, Anthrax, but FNM take it to another level in terms of their inventiveness and their embracing of so many genres.

Have you seen them live? If so, what’s your favourite gig?

Funnily enough, I am not a huge fan of live music in general and don’t go to that many gigs. I have only ever seen FNM once, back in 2010 at Brixton Academy. It was amazing. Patton in his pink suit crooning Peaches and Herb’s ‘Reunited’ with Roddy…wonderful.

My favourite album is ‘Angel Dust.’ FNM haven’t made a bad record, but ‘Angel Dust’ stands out for so many reasons. After ‘The Real Thing’ it would have been so easy to just reproduce that poppy, breezy vibe, and had they done so, it would have been terrific. But they chose to go down the route of eclecticism and make their fans work to understand the album and for that, they deserve great respect. I think it’s a majestic album; it brims with confidence and originality. And whilst ‘The Real Thing’ has – understandably ‘- dated to an extent, ‘Angel Dust’ still sounds fresh and original nearly 25 years on. That is some achievement.

What is it about FNM you love enough to take your knowledge to this level?

I have always disliked genres and have always greatly admired those who are not afraid to either experiment with genre or smash it down completely. You can get the same rush from a soul ballad as you can from a thrash metal track. LL Cool J was a pioneer in that respect, as were Run DMC, Aerosmith, Anthrax, Public Enemy etc. But I don’t think there has ever been another band that has so successfully made genre irrelevant as FNM. Just look at ‘King for a Day…” how can one band have ‘Evidence,’ ‘Digging the Grave’ and ‘Just A Man’ on the same record? But that’s what FNM have always done and it’s wonderful. Of course, a lot of that is down to Patton’s extraordinary vocal skills, but that willingness to jump between genres is present on all of their records since ‘Introduce Yourself.’ I guess in personal terms, FNM has been the soundtrack to my life in many ways. Exam results, teenage crushes, university, first job, first car, marriage…FNM have been playing in the background during all of these milestones. Their music is kind of part of who I am.

Why do you think FNM have such dedicated fans in the UK?

I guess British music fans know quality when they see it. The UK loves originality – it did produce The Beatles, Rolling Stones, Bowie, Depeche Mode, Bow Wow Wow, Talk Talk…the list goes on. So when a band like FNM shows up in London, they’re going to be noticed. They are also not overtly American in a way that perhaps the Chilli Peppers are. Their music has strong British and European overtones which connect neatly with the UK listener base. You can see the punk influence in many tracks for example.