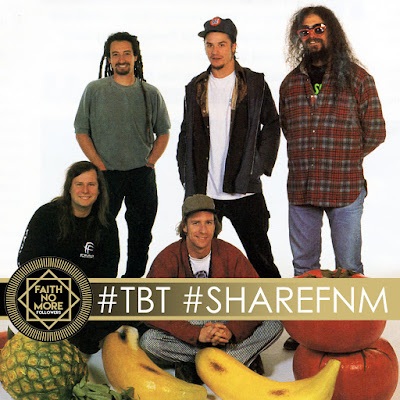 1992 article from our archives. Enjoy.

FAITH NO MORE toured the ragged arse off 'The Real Thing' and made it one of the most significant rock releases of the past five years. Now, with the new 'Angel Dust', they're set to do it all over again. ANDY STOUT takes the powder.

ANGEL DUST. PCP- THE substance the LAPD reckoned to be coursing through Rodney King's veins when four of the force's finest 'restrained' him using 'acceptable force' Acceptable force? Yeah, right. "Rodney King pretty much inspired the title," says Billy Gould,
Faith No More's bassist with the serial killer fascination. And it's hard to think of a more appropriate title. Maybe 'Elephant Tranquilizer' or 'Intense insanity' (though they're not as glamorous as a, y'know, drug thing) - when the opening track, 'Land Of Sunshine' slams in with its moments of cascading keyboard dribbling madness, they just seem right.
Produced by Matt Wallace (also the man behind The Real Thing'), 'Angel Dust' is everything you wanted from a Faith No More album. One that dispels the naff parts of 'Introduce Yourself' and welds together the more fragmented elements of 'The Real Thing', an album where all the power is focused in one blinding spot.
But Faith No More only touched down on British shores yesterday, so they need to catch up with news Brit-side before we delve into the machinations behind the new album. "Whats happened to Kylie?" they ask. Er she's mutated into SexKylie, a brazen, lust-filled temptress, "SexKylie?" "Yeah, it's a Madonna thing."
"Oh, I tried that once," says Mike Patton, but before he has a chance to continue, Jim Martin wants to know what happened to the bird with the "big tits" After a while, we work out he's talking about Samantha Fox, and tell him she's apparently big in Germany, but rumors persist that her breasts have shrunk. He has the grace not to look too upset.

Talking to Faith No More, especially when all five of them are lounged out drinking coffee in the corner of a photo studio, is easy. Whatever bullshit has been written in the past about the chemistry or lack of it between the band members, they've all got their opinions, they all want to stick their own oars in.
Roddy Bottum, the man who's single-handedly rehabilitated the cause of keyboards in rock from the likes of Mess rs Wakeman etc, isn't too sure about the coffee, though. He wants to know if it'll affect his diarrhea.
"Drink coffee, and it'll come out like cappuccino: all frothy on the top," he's informed reliably.
Charming. It certainty doesn't sound like a band who hate each other- more like a band who're just as mildly sadistic as anyone else would be after spending long periods of time living in each other's pockets. But what about the old quote of Billy's about the secret of success being to hate each other?
"I never said that," he retorts, "I don't think I ever said that. If I did, it's a misquote."
Yeah, but somewhere along the line you've picked up a reputation for mutual self loathing.
Billy: "We can be really boring, which is why I think sometimes angles like that are easy to pick out. Like bitching at each other maybe there's nothing else that the writer wants to hear"
"It's opportunistic," shouts someone.
"If someone's in a shitty mood," says Patton, "rather than Just lying about it and covering it up, it all comes into the open." "Yeah, we do a whole lot of backstabbing," says Roddy. "We don't usually do interviews with the five of us together if there's two of us we'll really come down on the other three." "I don't think that's really that unusual," says drummer Mike Bordin, "but how many bands hide it? Like how many bands threw out members this year? All the bands that were brothers to the end that's crap." And while we're on the subject of throwing out band members, it seemed for a while that FNM were going to be recording three albums with three separate vocalists. Chuck Mosley, the original singer who helped make 'Introduce Yourself' such a black, cathartic affair was booted out in '88, and last time they were over on these shores, his replacement Patton was reportedly heading for the same 'career rationalization' mouthing off about his other project, Mr Bungle. Mouthing off to such an extent that everybody else hated him, wanted his balls for earrings, etc.
Ah well, journalists will make things up. Mention it, and there's a mass chorus of "Bullshit!"
"In defense of him," says Bordin, gesturing in Patton's direction, "he goes up to the people and he says, "Mr Bungle is different; Mr Bungle is fucking completely different. It's away from this band; it's a completely separate thing. So, that happens, then the record comes out, and lo and behold everybody says, "And you got panned right?" Patton nods. "Everybody says, 'This record is fucking shite. Ifs nothing like Faith No More. It's crap."
There's a drawn and very sarcastic intake of breath all round. "My friends love it," says a voice. 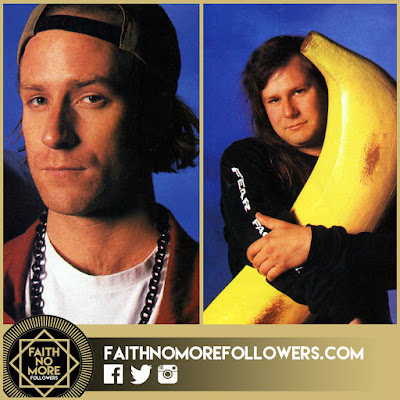 For Faith No More, the press is really a double-edged sword. Probably only Guns N' Roses have ever had so much journalism of a dubious nature written about them. Wherever they go, a web of intrigue and rumour tends to trail in their wake. Mention the name of one writer who decided Jim was an asshole, and kept referring to him as such throughout the piece, and you're met with hoots of derision.
Roddy: "Jim said, 'Are you gay?' and he quoted it as, 'Are you a faggot?' He totally misquoted him."
Billy: "He kept going on about Labour and talking about shit like that. You'd answer him back, and if he saw you were going to come up with a good answer he'd just change the subject,"
Patton: "He's the one that said, 'So are you saying that black people are stupider than white people?' That's not what I fucking said."
Billy: "I think journalists take the easy way out a lot. That's the only
rough deal we ever got, though."
Bordin disagrees. "To me, the most rough deal was when they put us at the head of this fucking well organised, highly structured, fucking nationwide, grass-roots funk 'n' roll movement. That was a raw deal to me. That was horseshit, y'know."
Billy: "Or they do this fraternity boy thing, and make us whacky and tell crazy stories about us." "Yeah," says Patton, "photographers want us to do this Chili Pepper goofy face..." "Like the stink about how different this record is has already come up before people can even buy it, and that's a bit of a disservice to the record," says Billy, peeved. "Every interview we've done is, 'How come your record is so different this time?'" 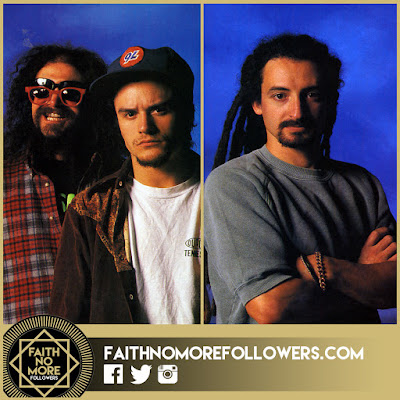 Different? 'Angel Dust' is no radical departure for Faith No More. Sure, anyone listening out for another 'From Out Of Nowhere' or Black Sabbath cover version is going to think it's very different. 'Angel Dust' builds on the bones of what went before, and does it rather finely as well. Then again, as Bordin points out after the interview, if they'd done an album that sounded similar they'd have got attacked as well. Some you just can't win.
Swirling from the frustrated anger of 'Jizzlobber' through the cocktail lounge schmaltz of 'RV' ( like listening to Tom Waits on some obscure drugs), to the brooding, sweeping evocation of 'Kindergarten', the album keeps hold of its intensity and refuses to let go. "We kinda felt we had to take it up a notch," explains Patton.
Bordin: "If you convince yourself that you've done it, that everything's great, it's no big deal, everything's over then you're fucked, man."
Obviously FNM haven't got to that stage yet. Though their press release describes them somewhat sarcastically as, "Sitting on their silk chaise lounges in their $1100 silk warm-up suits sipping frosty beverages brought to them by their
servants in their Bel-Air mansions",
FNM '92 haven't lost their grip on reality (well, whatever grip they had in the first place, that is). 'Angel Dust' is as eclectic as any previous release of theirs, but there's more coherence to it. But, hang on... "Y'know, a lot of this thing about us being eclectic and shit is coming from writers," says Billy, a little tersely. "I hate to say it, but I don't think people would think of us
like that unless they read about us like that."
Patton: "Just because all 12 songs on the record don't all sound alike, ifs eclectic, right?"
OK, what about the album being far more focused?
Billy: "I kinda think that's true."
Bordin: "Yeah, hopefully we do it better We've had more time to do it. Some change, y'know. Some steps along the fucking path. We've Just got this guy., ." he says gesturing to Patton again.
Billy: "We're the same band making another record, and if people say it sounds a little different then obviously we're doing something right. We're doing the same thing we always do, but we're making it interesting enough that people realise it."
Bordin: "People say if you don't sound the same as the last record, you must have turned your back on that. That's not the case. You just move along."
Obviously being a little different is okay. So's being a little famous. In previous interviews, Patton's said how uneasy giving autographs make him, and when besieged by a gaggle of groupies, the band all react differently, ranging from mild interest, through frank curiosity, to plain indifference. It's been a long struggle for FNM (ten years, to be exact). At one point Billy pawned his bass to get some food,and only got a measly $50. So how do the trappings of fame affect them? The mention of the word 'groupie' is nearly fatal.
The mic on the tape gets overloaded and all that comes out is distortion. There's a voice in the background that says, "We feel much less guilty about it." When it all settles down again, Patton's first in line. "That's you guys' job to describe it in those terms. I don't think that any of us walking down the street would think, 'Hey, I really wish some groupie would throw themselves at me today.'" "When you go to get some Alka Seltzer down at the liquor store, you don't think about how great it is to be famous," says Roddy.
Bordin: "We don't see it that much. We've been on the road: it's not like people recognise us in our own city or something."
Roddy: "We're not famous where we live."
Patton: "Even if they don't recognise us, they'd just say, Why haven't you guys got a record out?' or something. It's no big deal."
"It's  the environment we live in, too," says Billy. "San Francisco, Los Angeles, California... People see movie stars all the time so they take it for granted. When I see someone famous, it just makes me sick. I look the other way for the most part, and I think most people do that."
"More than that," says Jim, "famous people in California are considered scum."
"Like, 'Who did you fuck to get where you are?'" says Roddy, and there's a chorus of nasty laughter.Did Faith No More fuck anybody to get where they are? Who knows.
To be honest, who cares? Even If they're all shagging the president of their record company, they deserve their success.
PCP theoretically gives you the strength of five men. In this case, one of them's got a beard and wears loud glasses. That is acceptable force. 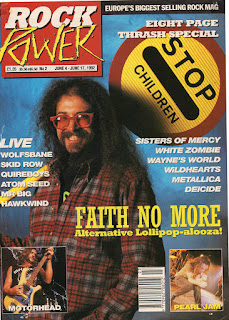