SUNNY SIDE UP | Joe Lynch Interview 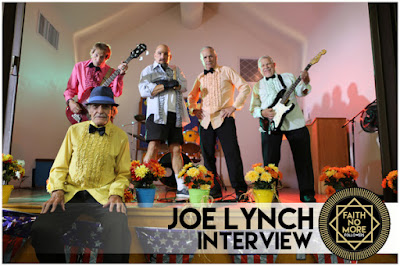 Surely by now we have all had time to watch the new Faith No More video for their latest single release Sunny Side Up at least a thousand times.

One Flew Over the Cuckoo's Nest in a hallucinogenic air conditioned nightmare..... It is a stroke of genius and the perfect accompaniment to the song. Well done camp FNM you've done it again.

Faith No More prove sex, drugs and rock and roll are for the geriatrics as much as the kids in the hilarious, trippy clip for "Sunny Side Up," off the metal outfit's new album, Sol Invictus.


Never scared of the weird and the wonderful, Californian rock legends Faith No More have released a suitably whacky and fun-loving music video for their new single Sunny Side Up.

The video fits quite perfectly into the catalogue that precedes it. The wonderfully dark humour of the story that unfolds is typical of FNM, who after all these years still have the ability to make us smile, albeit uncomfortably. This humour is a side of their collective nature we haven't been treated to on film since Last Cup Of Sorrow. However the obvious difference here is the lack of the band members, who are portrayed expertly and with charm by five elderly actors. The supporting cast are equally as much fun and full of attitude, especially the guy who drinks from his drip then flips the bird!
The direction is fantastic particularly the close up shots of the band and the reactions of their audience. As the film reaches its climax and colours bleed into the shots we can really sense FNM's presence in psychedelic scenes of happy humour.

Throughout the video there are clever nods to the real world of FNM: the flower pots front of stage, Patton's megaphone, Puffy's gloves and shorts to name a few. It pretty obvious the direction was handled by a fan. 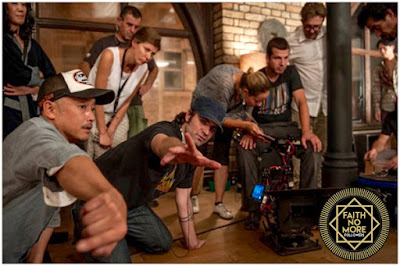 How did this collaboration between yourself and FNM come about?

Funny enough, I’ve been trying to make a Faith No More music video since I fell in love with the 'Angel Dust' album back in 1992. I wrote a video treatment for every single track on that album and sent them to Slash Records, I never heard back, hmmmmmm. But since then it was a dream of mine to do a video of theirs. I kept contacting (i.e ‘bothering’) some of the members over the years, to just work with any of them since I was such a huge fan. When Mike had 'Fantomas' on Ipecac, I lobbied hard to do a video for 'The Director's Cut' album. We came close to putting one together for ‘Henry: Portrait Of A Serial Killer’ (where we were going to recreate shots and scenes from that iconic horror movie and hint that Mike was the killer’s conscience) but then 9/11 happened and put the brakes on that. I almost worked with Billy on some of his Koolarrow bands but that never worked out, but we kept in touch. When the new album came out I reached out saying “Any song, let’s do it”. I guess it helped that I had a new movie out at the time – Everly with Salma Hayek (Available now on DVD / BluRay / VOD). But low and behold one day I got an email from the band’s manager saying “Hey we have an idea…wanna make it with us?” When your favorite band of all time come calling….you pay attention!

Tell us a little about your personal FNM experiences?

They were one of the bands I always regretted not seeing live for so many years. When they toured a few years back I saw them in Los Angeles at the Palladium, which was good but we were so far away from the band I didn’t really enjoy as much. But just a few months ago I got invited to that secret show at the famed Troubadour in Hollywood. Dude, greatest show of my life! I took a pic of Mike on the bar when he crowd surfed to the back of the venue to take a shot, all while continuing to sing. At one point he and I locked eyes and I took the pic and posted it. Next morning it went viral! So yeah, it’s been a crazy time lately to be a Faith No More fan, especially in my position where a fan is working with them! I can proudly say that I got to check something off my bucket list. ‘Direct a Faith No More video’ done!

FNM don't feature in the video which is only the second time in their career this has happened. Was this their decision from the outset?

Yes they had two rules. One, don’t fuck up. Two, we can’t be in the video because we’re touring. They had the initial idea of an older version of the band playing some old folks in a home and the theme of being youthful and reckless even in their golden years, and I just ran with it. But yeah, they didn’t want to be in the video so we had to make sure whoever was visually representing them would bring that FNM energy. And the guys we got did in spades!  They rocked so hard on the day we shot I suggested they go out and do an entire tour playing as ‘Faith No Less’ or ‘Alive No More’ the greatest FNM lip sync band ever!

How much involvement did FNM have in the video?

Well, they trusted me with their first video in almost two decades, but having made a lot of music videos for a lot of artists, I was shocked how wonderfully relaxed and collaborative they were. Usually when you submit a first cut to the band and/or label you get ten pages of notes, most of the time contrasting with each other, and from every member of the band, execs, their girlfriends, the tour bus driver….etc. This was the easiest time I ever had on a music video, but that’s not to say they didn’t care. Oh they did, we were just on the same relative page from day one, so it was a joy from start to finish.

How did you find such a charismatic bunch of actors for the roles of the band? Roger Brown as Roddy is particularly great.

Central casting! We just put an ad out saying we needed older actors who could play each specific instrument. I knew we could cheat the guitar, bass and even piano at times, but if the vocals and drums weren’t on point and in sync we were doomed. Luckily every single member of the ‘band’, from Richard on vocals to Buddy on drums, Roger on piano, Bruce on guitar and especially Robert on bass (who I had no clue but was a key character in one of my favorite films, the remake of The Blob) were so on-point and brought so much energy to set that day. The rest of the cast were so blown away that they kept asking for encores!

Did they watch live FNM footage to get into character?

Yes they did! Ah the power of YouTube. Richard in particular was studying mike’s facial expressions and body presence on stage and I know Buddy was rehearsing how to specifically mimic Mike Bordin’s particular drumming style. They knew they had a responsibility because again if the fake band sucked, we’d be sunk. You’d be shocked how many people think that’s the real band under a lot of make-up! That’s a testament to the fake band's performance.

The album 'Sol Invictus' seems to deal with themes of resurrection and the later years of life. Did you listen to the album for inspiration in your story and direction?

I adore the album. I was hoping to do ‘Separation Anxiety’ as it’s my favourite song on the album but clearly ‘Sunny..’ has become the front runner. I’ve heard that song likely more times than the band at this point and I’m still not sick of it! But it’s a classic Faith No More album, compelling form first to last track.

Do you feel that your video has given the song another dimension? And do you feel it fits in with FNM's previous catalogue?

A good video enhances a song and of course vice versa. I think the video definitely has the band’s twisted sense of humor, that they are more comfortable showing this side of their career and taking the piss out of ageing in the public eye. Yeah I think it completely fits in the FNM videography, but I’m bias!

Who influences your film making?

What projects are you working on at the moment?

Nothing I can say now….why spoil the surprise! Even my mom, who knew I was such a big fan of the band, had no clue I did the video. It's always fun to keep things in the mystery box until it’s the right time. If all goes well I'll be checking off another box on the bucket list very soon, wink wink!