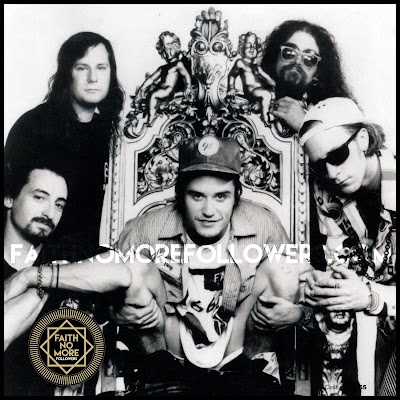 On October 1st 1992 Faith No More performed with Helmet at Queen City in Buffalo, New York.

However the show was not the reason they were in the press the next morning. After their gig the band performed at a radio appreciation party for 97 Rock which led to arrests and a possible ban on FNM returning to Buffalo. I'll let this news article explain further.

PATTON OFFERS NO APOLOGIES FOR LEWD ACTS AT PARTY

Mike Patton has caused a national furore with his apparent sexually suggestive performance at a 97 Rock appreciation party in Buffalo, but the lead singer of Faith No More offers no apologies.
In fact, Patton enjoyed the show -- during which, witnesses claim, he took off his clothes, exposed himself and then performed lewd acts with a microphone -- and would like to come back and repeat those antics.

"I loved it and would do it all over again if I could," Patton and FNM said in a statement to The Buffalo News released Sunday by the metal band's record label, Slash/Reprise.
Barbara Balchick, a representative of the Cleveland record label and Faith No More, told The News: "Mike said he had a great time in Buffalo and the band did, too. They view the performance as a total rock n' roll assault. No malice was intended. They'd love to do it again if 97 Rock would let them."

That's doubtful because WGRF-FM, owned by Rich Communications, has refused to comment and is red-faced over the incident that occurred at around 1:30 a.m. Friday in the Impaxx Night Club & Theater. The party was heavily promoted to listeners, who had to contact the station to get special invitation tickets. It featured a number of national acts, including Buffalo native Billy Sheehan.

A spokesman for the Southside Station said that two complaints were filed after the show, and four witnesses have spoken to the police. Witnesses have said that Patton removed his clothes, exposed himself, turned his back to the crowd, bent down, and then performed lewd acts with the microphone. Also, witnesses said, another member of the band used his guitar neck to perform lewd acts with the singer.

"I've been to many rock shows, but I've never seen anything as sick and disgusting as this," John Ganter said. "Everybody there was appalled at what Patton did. They just wanted him to get off the stage and get out." Ms. Balchick said that Patton was injured when several patrons threw beer containers at him. "Mike got hit and cut in the head, and had to have several stitches," she said.

Mary Baker, who also attended the event and filed a complaint with the police, said that Patton grew angry with the crowd and hit her friend, who was standing near the stage, with the microphone. She said Patton also vomited and spit at the crowd. "That guy is just plain sick, and his whole act was a disgrace," she said.


Jay Desiderio, part owner of the Impaxx, has said that after the incident, the club's security people threw Faith No More out of the club as soon as possible.

I asked Bill Gould what the outcome of the situation was and this is his reply....


'We got the hell out of there before the cops came, it was great, except that Mike P was bleeding pretty badly from two bottles that were thrown at him from close range. Still he got his revenge by throwing the mic like a speedball right into one of the guys faces. I'll never forget that.'