30 years ago FAITH NO MORE tour the UK 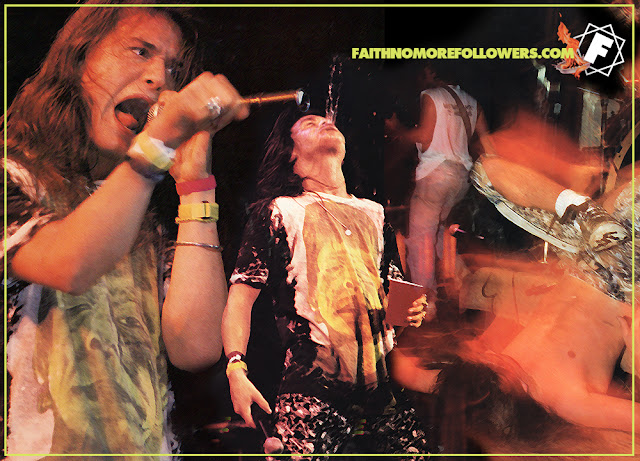 On October 11th  Bill Gould hits the stage in support of Alice Cooper alongside his MC50 band mates at Birmingham Resorts World Arena in the UK. 30 years ago Faith No More returned to the UK for the second time that year to promote The Real Thing. The first venues were Edwards No.8 in Birmingham on the 10th of October and Sheffield Polytechnic on the 11th.

SCAT OPERA have seven inches of stage space. Five full minutes of sound check behind them, and around three people at the front who are only half interested. Murder by numbers. Though, for a four piece from London who have risen from relative obscurity-a handful of Marquee supports are about all they can call their own, profile-wise-alienation is nothing new. The blond vocalist, who looks unerringly like a young Chuck Mosley, apologises for not being American and promptly launches 'Fifo Fuck' as if it's what the front row have wanted alt their lives.
Scat Opera are as alarming as the first time I saw, say, the Toll, or experienced a Jane's Addiction sampler They have no peripheries to their music, no recognisable tags. There's extremes and edges, but it's like attempting to make a punch count on the surface of an ocean.
Momentarily, I thought it could have been weaned off Faith themselves, but back to back there are no comparisons. The bass funks, flattens and ravages, the guitar distorts and then slides while the drums just belt you in the mouth and tell you to shut up and listen. This one you've got to see for yourselves.
Faith No More have a sound problem that rings like an alarm bell and growls like an irate feline. The snare resembles an inverted steel bucket being struck.
For the rest of the evening I couldn't quite work out whether Mike Patton either knew or cared. There is something wrong with this man, very wrong. While we stood stuck to the walls, smeared with perspiration, he complained of the cold, chuckled like an edgy schizophrenic, and twirled insanely. Then he picked the best Metal T-shirt in the audience - a Whitesnake design took it, Napalm Death were a close second - grabbed the recipient out of the audience, congratulated him and then tipped him back off. Let me assure you, he was having his own proverbial ball.
With the sturdy casting of 'Introduce Yourself' they blighted past shadows and confounded half the capacity audience who seemed familiar with 'The Real Thing' and very little else. 'We Care A Lot' fell the same indecisive dusty route, while 'Falling To Pieces' was welcomed like the return of a favoured son.
So much so that the stage shifted dramatically, sloped threateningly and then shifted itself back into place. Patton chose the moment to examine the sweat on the ceiling and marvel publicly at the cool air breezing in through the grill above his head. There is something wrong etc. The barrage strode on, hand in hand with the clumsy showers of
ice cubes falling into the front, Patton contributed with his Evian bottle, 'From Out Of Nowhere' slid gracefully in, bludgeoning Jim cracking his ridiculously hairy head in and out of focus. 'Woodpeckers From Mars' landed like a small Steinway let go from 20 storeys up, which opened the way for 'War Pigs' to carve a foul smelling swathe through the human mist. Dark and odious, lingering like the darkest cancer bud. Black hearted and for ever.

SCAT OPERA are damn weird. They deal with the 'support band apathy' syndrome with a few sneers, then proceed to throw a sweaty ball of furious energy at the bewildered audience. All of which belies the fact that the London-based four-piece are relative newcomers, clutching a contract with Noise Records, the ink barely dry. 'Dead Giveaway' (kinda like Bad Brains on a collision course with Killing Joke at their heaviest), for instance, is a perfect reflection of current FunkPunk fusionist trends. The reaction proves that Scat Opera have things in the right place even if a little fine tuning is required.
Strangely enough, Faith No More were probably in the same situation as the Seat crew a few years back; They were too confusing for mainstream consumption, despite being pioneers in their field. Tonight, however, their eclecticism is what people have come to revel in.
If the last UK tour back in July saw newboy vocalist Mike Patton busy introducing himself with a fair degree of nervousness to the Faith crowd, this time around he runs the joint.
Memories of his predecessor (Chuck Mosley) have clearly been banished, and rather than trying to get Mike to wheel out the old material the Faith chaps go straight for the far superior stuff from current platter, 'The Real Thing'. 'From out Of Nowhere' is perhaps the finest opener anyone could ever ask for. where Patton is in his own element, 'Surprise, You're Dead!' (introduced as 'Like A Virgin') is devastating. 'Underwater Love' is sensual and classy. "Ya know singing for this band is a fuckin' dirty job! states Patton before launching into 'We Care A Lot' (from 'Introduce Yourself). The truth is that Patton does with aplomb and soul. The dirt and grime is still part of the FNM sound, but they've found a new sense of professionalism.