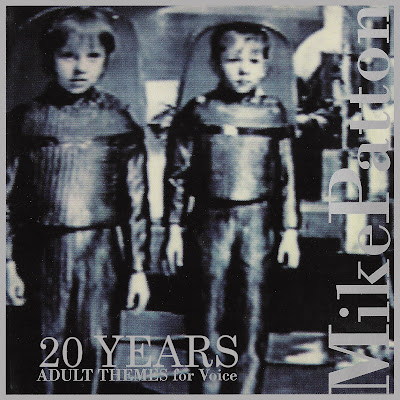 On this day in 1996 Mike Patton released his very first solo album, Adult Themes For Voice.

"Doing that record gave me the tools to do some of the things I would use later in Fantomas."

This recording comprises of 34 tracks of Mike Patton's vocal expression. From screaming, moaning, squeaking to barking almost every noise capable of being made by the human (superhuman in Patton's case) voice are included. The album was captured on four track TASCAM recorder which Patton had on him at all times during Faith No More tours between 1992 and 1997, "Recorded and mixed in fine hotel rooms around the world." It was produced primarily by John Zorn who was also the inspiration behind the recording.

"John Zorn asked me to do a vocal record. At first, I was surprised, but the more I sort of thought about it, the more I realised that I could do it, and that I'd had impulses to do it before he'd even asked me.I was a big fan of [Greek-Italian singer] Demetrio Stratos at the time, who'd done several vocal only records that are completely mind-blowing. I knew I couldn't do that, because he's very studied and almost academic in a way. But I thought maybe I could take that same approach and do it with what I'd learned. So, I took a four-track with me on tour and did most of it on the road."


Patton took inspiration for the album from Japanese noise artist Yamataka Eye and his work with The Boredoms and Hanatarash.

"To me, Adult Themes was the fork in the road where you either stepped back and admired [Patton's] more conventional rock-based stuff, or plunged balls-first into oblivion."